Imagine if there was a carbon-free form of energy hiding in the ground beneath you. One that we could turn to anytime, even on cloudy, windless days.

There’s no need for imagination: It exists. Research suggests that geothermal energy could be the key to running the country on purely renewable power. A recent memo from the conservative clean-energy think tank ClearPath estimates that geothermal energy could supply as much as 20 percent of the country’s electricity. That would put the United States nearly on par with Iceland, which gets roughly a quarter of its power from underground heat. But getting there depends on loosening regulations and borrowing drilling techniques from the oil and gas drillers.

“It’s a great resource, but one that doesn’t get a lot of love,” said Spencer Nelson, who directs the energy innovation program at ClearPath and wrote the memo.

Members of Congress might well pass subsidies and regulatory reform to encourage geothermal energy, if they realized its potential, Nelson said. It’s the sort of issue — far from the supercharged partisan battles — that could get bipartisan support in this strange political climate.

At the moment, geothermal energy is limited to a few spots in the western United States, in California, Nevada, and Utah, where steam from underground hot springs turns electrical turbines. It supplies a total of O.4 percent of the country’s electricity, in part because politicians keep forgetting about it, Nelson said.

When Congress has passed incentives to encourage clean energy, lawmakers have tended to be less enthusiastic for geothermal power. Wind and solar get 30 percent tax credits, but the geothermal tax credit is just 10 percent. “It was a mistake,” Nelson said. Congress didn’t think to include geothermal back in 2005, when it passed a law easing environmental regulations for oil and gas wells. As a result, drilling for geothermal energy requires a much more lengthy environmental approval process than drilling for oil.

Red tape is a major reason we don’t have more geothermal energy, according to a study from the National Renewable Energy Laboratory. It generally takes eight years to do the environmental studies required to start a geothermal project, which could be prohibitively expensive for anyone trying to build a power plant. The study estimated that if we cut that approval process to four years, it would encourage a surge of new projects, perhaps enough to double geothermal electricity production by 2050, compared with the production expected with current regulations.

To get 20 percent of the country’s electricity from geothermal power requires new techniques. By drilling deeper, drilling horizontally, and fracturing rocks to create artificial hot springs, geothermal energy could spread across the entire country. Just about any city could heat houses and offices by sticking a straw into the ground and running hot water through pipes. All together, geothermal could provide 100 gigawatts of electricity at competitive prices, according to the Department of Energy. That’s as much electricity as all the nuclear power plants in the United States produce, enough to power 100 million homes. 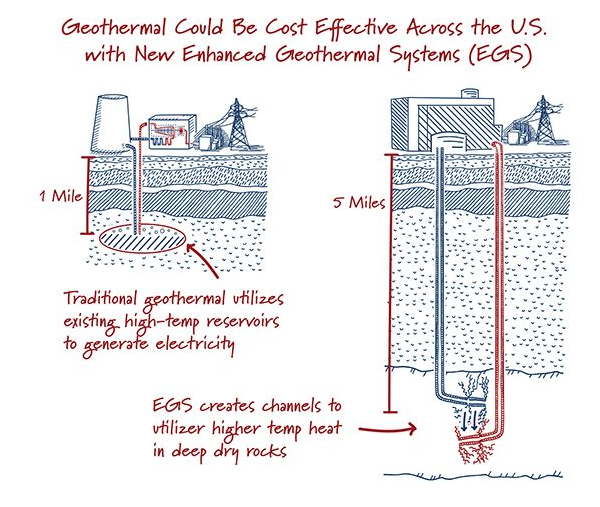 Harnessing so much energy would require innovation. But that could be as simple as borrowing from an industry that’s developed a bounty of drilling techniques to capture more natural gas. In other words, clean energy could get a boost from the folks who brought us fracking.

“It’s astronomical how fast the drilling industry has advanced over the last 15 years,” said Tim Latimer, co-founder of Fervo Energy, a startup working to harness those innovations to generate geothermal energy.

Fracking brings its own unique risks, like earthquakes. The South Korean government recently said one geothermal plant likely created a magnitude 5.4 earthquake in 2017 that injured 135 people. The high pressure used to pump fluid into the ground to fracture rocks and release heat spurred small earthquakes. The shaking then reached nearby faults, setting off the country’s second-largest quake on record.

A recent paper suggests some lessons from that disaster: Monitor earthquakes to see if they are getting too big, and don’t drill too close to fragile buildings. No energy comes without problems. The trick is to lower the risks as much as possible. “We need to take the appropriate safety measures as we move forward with this,” said John White executive director of the nonprofit Center for Energy Efficiency and Renewable Technology.

Latimer pointed to other challenges. Frackers generally work with soft shale, but the hot rocks that Fervo targets are often hard granite. It’s also relatively simple to pump oil out of the ground compared to cycling water in a closed loop to capture heat, he said. And there’s the need to make sure the water injected down to hot rocks doesn’t simply disappear into the ground. Latimer ervo has modeled potential solutions for these problems and plans test them at drilling sites soon. 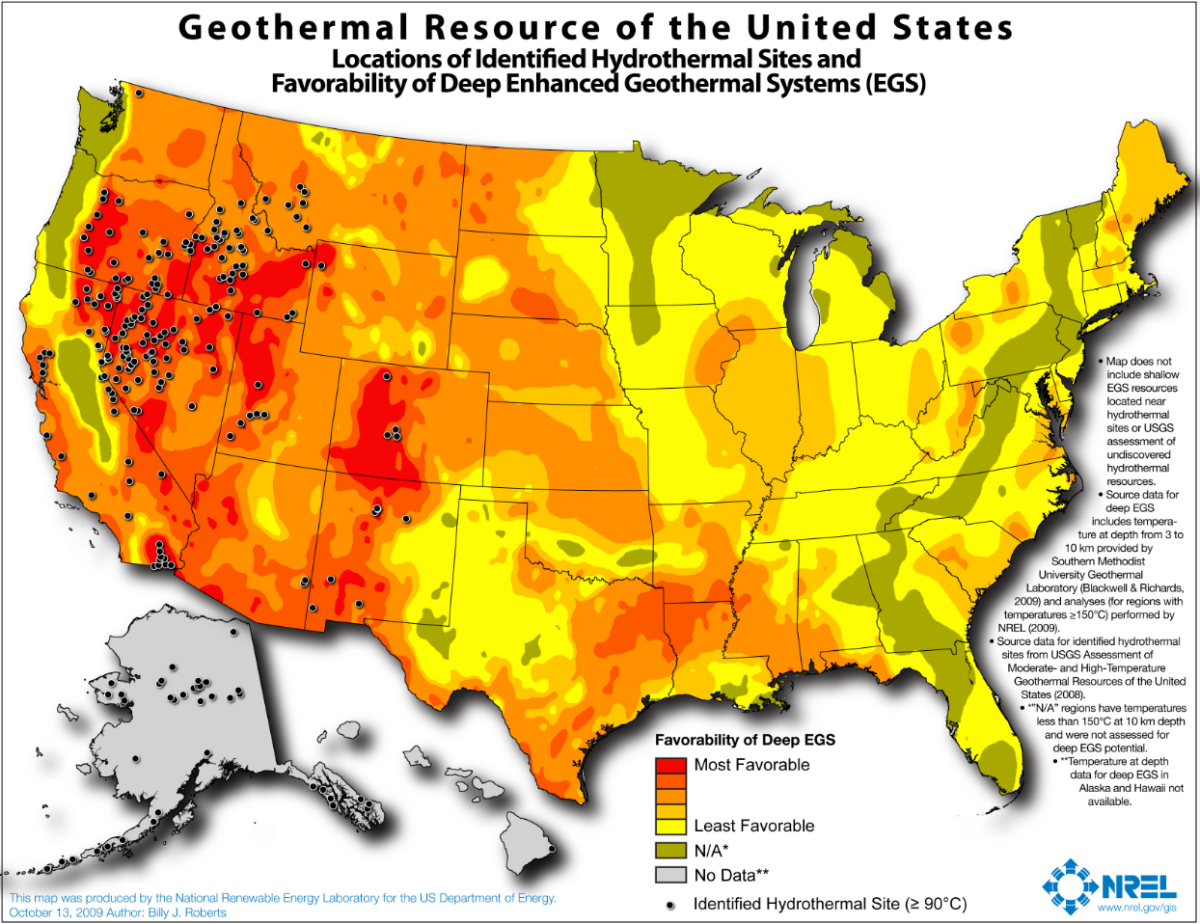 Almost the entire country could have geothermal energy with the use of fracking technology. NREL

All this matters because wind and solar can’t meet all our energy needs on their own. In California, renewables sometimes provide more than 60 percent of electricity when the sun is high. But when the sun dips below the horizon, gas plants around the state and coal-fired generating plants in Utah crank into high gear, spewing out over 4,000 metric tons of carbon dioxide* an hour. There’s a desperate need for clean energy that can run at night, especially when it’s not windy.

White said it’s time to figure out how different forms of energy can fit together so that people can use clean energy around the clock. The recent research suggests geothermal could be one of the missing pieces needed to solve that puzzle. “We don’t just need wind or solar or batteries or geothermal,” White said. “We need it all.”

Most experts agree wind, solar, and hydroelectric dams could provide around 80 percent of the United States’ electricity. To get all the way to 100 percent clean energy, we’ll probably need to reach deeper into our bag of tricks.

*Correction: An earlier version of this piece incorrectly stated that California’s electrical system emits billions of tons of carbon dioxide equivalent every hour.