According to this lawsuit, if you opposed DAPL, you’re a terrorist 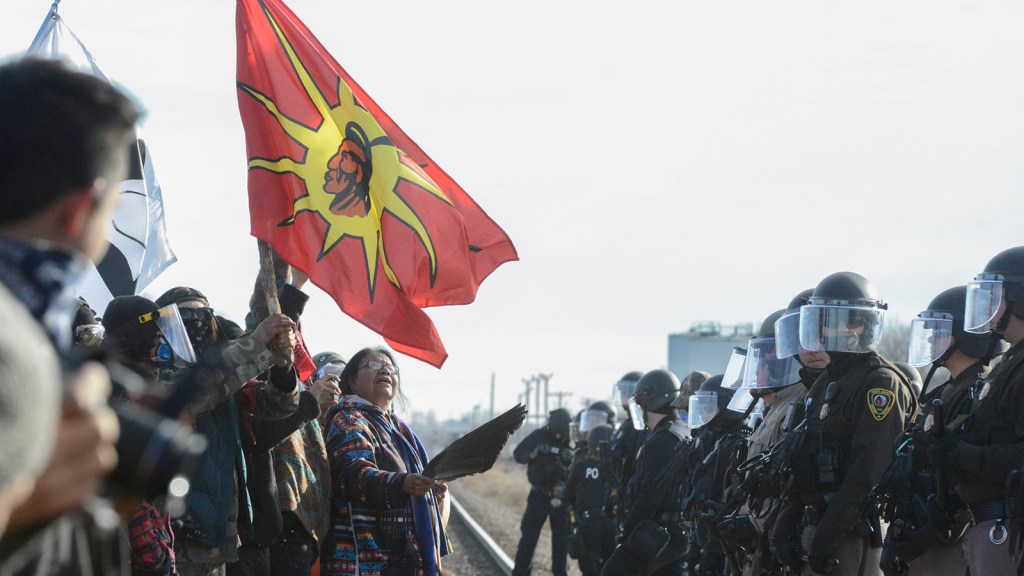 According to this lawsuit, if you opposed DAPL, you’re a terrorist

The natural gas company Energy Transfer Partners has opened a new front in its ongoing battle with the environmental movement that opposed the Dakota Access Pipeline.

The Dallas-based company is now labeling many of those who opposed its pipeline “eco-terrorists.” This from a company that employed a private security outfit to surveil and track members of the #noDAPL movement as though they were jihadists.

A lawsuit filed in federal court argues that GreenPeace, Earth First! and many other green groups engaged in racketeering, outlining a “criminal enterprise” involving a coordinated attack launched by “wolfpacks of corrupt” environmental groups — using fake news and publicity stunts — that bogged down its construction effort and cost the company millions of dollars.

The 187-page complaint name checks nearly every environmental group you could think of — Earthjustice, The Sierra Club, Rainforest Action Network, 350.org, and on and on. The suit also names BankTrack, an organization that monitors the financial activities of commercial banks, as a defendant, as a result of its involvement in a recent movement to divest from banks that financed the pipeline-construction effort.

Members of the #noDAPL movement who spoke to Grist note that the complaint ignores the fact that the anti-pipeline effort was indigenous-led. The environmental groups primarily offered solidarity and some support — Greenpeace, for example, donated a solar array to the protest camp. A common refrain was that this complaint paints an alternative picture of reality. But it could also be the next step in a playbook that attempts to equate social justice campaigns with terrorism.

“This is full-scale, frontal military assault on the environmental community,” says Daniel Sheehan, a constitutional lawyer and lead attorney for the Lakota People’s Law Project. He notes that the lawsuit was filed by the law firm of President Donald Trump’s personal lawyer, Marc Kasowitz.

Sheehan says that the racketeering charge is totally unsubstantiated and points out that the suit centers primarily around defamation claims. It accuses the environmental groups of launching a campaign of misinformation, including spreading lies about how the pipeline was routed, that it would contribute to climate change, and the likelihood that it would leak. (By late May, there were three known leaks.)

Sheehan says the lawsuit was the latest salvo in a so-called “public diplomacy campaign,” which began with the company’s hiring of the private security firm TigerSwan last fall. As reported by Grist and The Intercept, TigerSwan portrayed the #noDAPL movement participants as, in Sheehan’s words, “an armed enemy that is threatening their physical facility.” That framing, he says, helped local law enforcement see protesters as violent adversaries. This lawsuit continues the narrative.

“They leap on Greenpeace because that’s who most of their constituents recognize as the flagship of the environmentalist movement,” Sheehan says.

Sheehan notes that many consider Earth First! — whose motto is “No Compromise in Defense of Mother Earth” — to be a radical group, so that might be why the Florida-based organization was added to the complaint. However, he says, “they were nowhere to to be seen” at Standing Rock.

Tara Houska, a tribal attorney and national campaigns director at the indigenous environmental nonprofit Honor the Earth called the complaint an example of a “SLAPP suit,” which stands for “strategic lawsuit against public participation.” “It’s essentially a way to try to silence free speech by trying to cost the defendant — organizations or movements or individuals, sometimes — money,” she says.

Among a litany of claims, the suit accuses the environmental law firm Earthjustice of challenging the U.S. Army Corps of Engineers’ approval of the pipeline on behalf of the Standing Rock Sioux as a way for the nonprofit to generate donations, by “aggressively publicizing” its association with the anti-pipeline effort. The complaint refers to Earthjustice’s legal action as a “curtain raiser” for the #noDAPL movement — which the document calls “a sensational production of an international media spectacle.”

“You see this characterization of big green groups trying to take advantage of the tribe and organizations on the ground,” Houska says. “It is really patronizing and condescending.”

In response to charges that the suit is an attempt to muzzle free speech, Energy Transfer Partners’ attorney Michael J. Bowe, of the law firm Kasowitz, Benson, Torres, told Grist in a statement:

Only people who think you should be able to say with impunity anything, about anyone no matter how false would think this is a frivolous suit. Lies are not protected speech. Neither is destroying property and assaulting people. It was demonstrably false to claim ETP was building on Native American land, was destroying sacred sites, had not exhaustively consulted with all relevant tribes, and employed violence on peaceful protesters. And it’s demonstrably true that protesters destroyed property and assaulted employees and law enforcement. None of that is legitimate, protected speech, and, frankly, it serves no real environmental interest.

Anthony Diggs, the CEO of Veterans Stand, a group of ex-military personnel who joined the pipeline protests, says, “The only terrorists I saw during my time at Standing Rock were the law enforcement.”

The former combat veteran who was previously deployed to Fallujah spent several weeks at Standing Rock this past winter. He recalls that officers constantly called protesters — including him — as “eco-terrorists” throughout his time in camp.

“If they set the legal precedent that people who were in that peaceful gathering were terrorists, that’s trouble for the social justice movement,” Diggs says.

Dallas Goldtooth, the national “Keep It In The Ground” campaigner for the Indigenous Environmental Network and a member of this year’s Grist 50, says this lawsuit shows the power of the movement that took hold at Standing Rock. The #noDAPL effort, he explains, offered people a chance to express support for a more sustainable future — a future that threatens the business prospects of companies like Energy Transfer Partners.