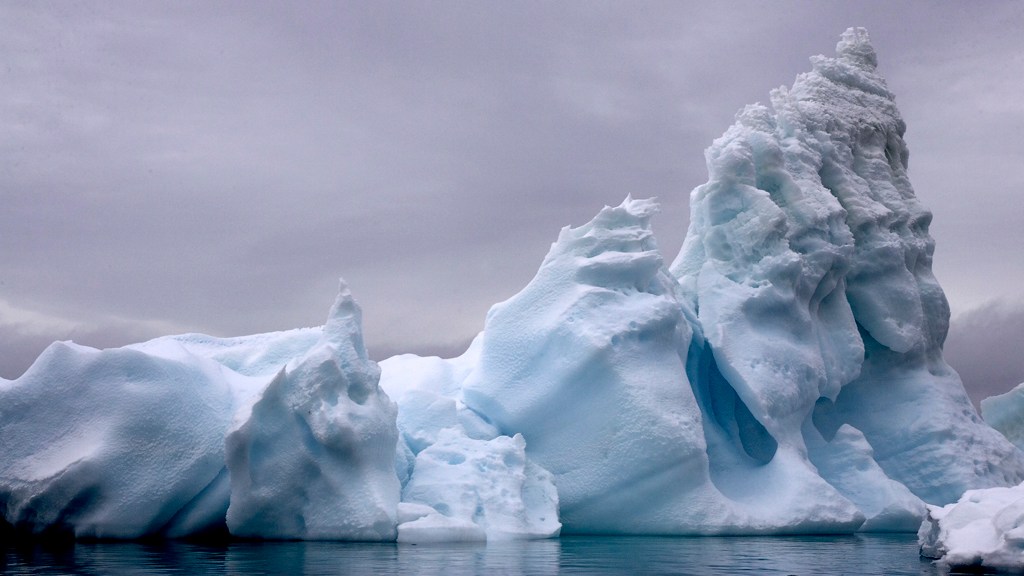 “The loss of ice from West Antarctica between 2009 and 2012 caused a dip in the gravity field over the region,” writes the ESA, whose GOCE satellite measured the change. Apparently, melting billions of tons of ice year after year has implications that would make even Isaac Newton blanch. Here’s the data visualized.

It reminds me of those first images of the ozone hole, decades ago.

To be fair, the change in gravity is very small. It’s not like you’ll float off into outer space on your next vacation to the Antarctic Peninsula.

The biggest implication is the new measurements confirm global warming is changing the Antarctic in fundamental ways. Earlier this year, a separate team of scientists announced that major West Antarctic glaciers have begun an “unstoppable” “collapse,” committing global sea levels to a rise of several meters over the next few hundred years.

Though we all learned in high school physics that gravity is a constant, it actually varies slightly depending on where you are on the Earth’s surface and the density of the rock (or, in this case, ice) beneath your feet. During a four-year mission, the ESA satellite mapped these changes in unprecedented detail and was able to detect a significant decrease in the region of Antarctica where land ice is melting fastest.

The new results in West Antarctica were achieved by combining the high-resolution gravity field measurements from the ESA satellite with a longer-running but lower resolution gravity-analyzing satellite mission called Grace, which is jointly operated by the United States and Germany. Scientists hope to scale up this analysis to all of Antarctica soon, which could provide the clearest picture yet of the pace global warming is taking in the frozen continent. Current best estimates show that global seas could be as much as 50 inches higher by century’s end, due in large part to ice melt in West Antarctica.

Previous research with data from a third satellite, CryoSat (also from ESA), has shown ice loss from this portion of West Antarctica has increased by threefold since just 2009, with 500 cubic kilometers (120 cubic miles) of ice now melting each year from Greenland and Antarctica combined. That’s an iceberg the size of Manhattan, three-and-a-half miles thick.