It’s no secret that communities living near big polluters have worse air quality than other neighborhoods, but it’s been trickier to get a grasp on the impact of emissions from moving sources of pollution like cars and trucks. Mobile polluters are not regulated or monitored the same way as stationary facilities like power plants. But a recent study by the Union of Concerned Scientists has released new data that quantifies the disproportionate impact of vehicle pollution on certain Californians — including many who do not own cars themselves.

The Union of Concerned Scientists released an analysis this month that showed that Latinos, African Americans, Asian Americans, and low-income Californians are breathing in more pollution from vehicle traffic than their more affluent and white counterparts. “Residents in the communities most affected have known for generations there was a disproportionate amount of air pollution in their neighborhoods,” said David Reichmuth, author of the new study, in a press release. “This modeling allows us to quantify the extent of the disparity across the state.”

Reichmuth looked at fine particulate matter (PM2.5) concentrations from tailpipes and vehicle refueling and used a model to estimate how much pollution communities were exposed to by census tract. (There’s even a nifty map for parsing through the data). 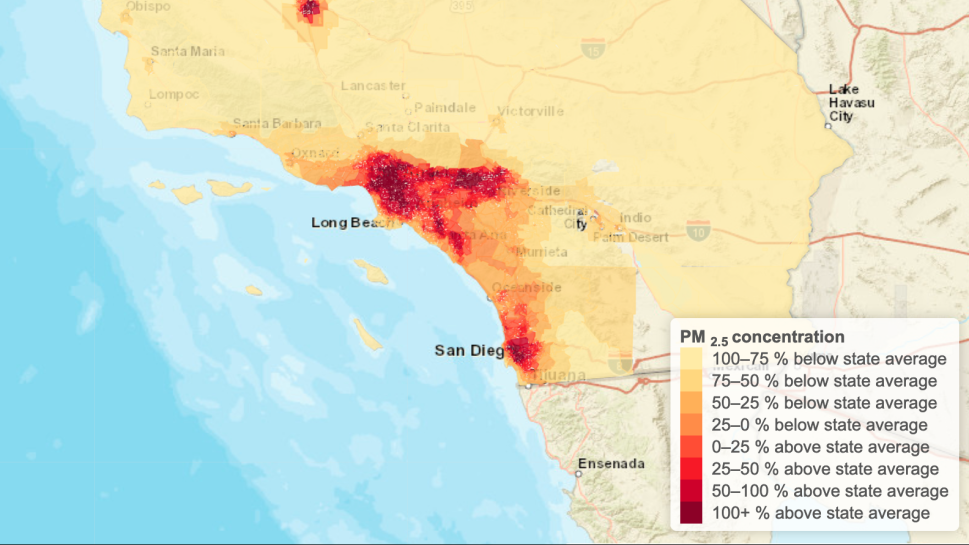 After combining that data with demographic information, researchers found that black residents faced the starkest disparities. Both African Americans and Latinos, on average, were exposed to particulate matter levels roughly 40 percent higher than white Californians.

When it comes to income disparity, the study found that the lowest-income households (earning less than $20,000 a year), on average, lived in places where particulate pollution was 25 percent higher than the state’s richest households (earning more than $200,000 a year). And those who were breathing in the most pollution from vehicles seem to be those who contribute the least to the problem. The study showed that because they tended to be located in urban areas, households without a personal vehicle are exposed to fine particulate matter levels nearly 20 percent higher than the state average.

“The irony should not be lost on local leaders and clean air advocates,” said Reichmuth.

Fine particulate matter can have consequences on lung and heart health. Reichmuth’s study also estimates that there are 3,100 premature deaths per year in California from cardiovascular disease, heart attacks, and other illnesses linked to transportation emissions.

To reconcile these inequities, the Union of Concerned Scientists recommends the state take steps to transition to more fuel-efficient or electric freight and passenger vehicles. California is arguably the state that freeways made, so designing communities that make it easier to walk, bike, or take public transit is important too.

“While Californians can make a difference by choosing cleaner vehicles, much of the pollution comes from sources outside an individual’s direct control,” the study says. “The state needs regulations, incentives, and other policies to reduce vehicle emissions. Equity and meaningful involvement of disadvantaged communities should be key considerations.”