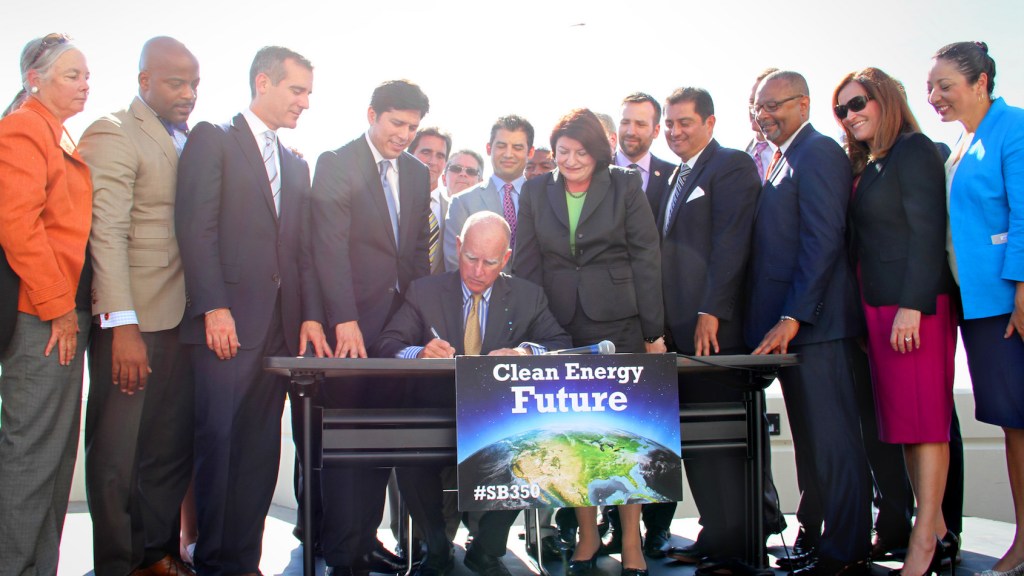 The California economy is thriving, according to a new report released Monday — and that’s despite the state instituting relatively restrictive environmental rules.

According to the assessment, after the passage of California’s trademark — and controversial — 2006 cap-and-trade law, statewide per capita emissions fell by 12 percent. For every fossil fuel job in the state, California has 8.5 in solar and wind energy. (Compare that to the 2.5-to-1 ratio for the nation, overall.) Most notably, the report finds the state’s per-capita GDP grew by almost double the national average since cap-and-trade passed. In fact, the state is now the most energy-productive economy in the world — meaning it uses the least amount of energy to gain each dollar of GDP.

“Being a leader environmentally is something the state has done for half a century, and the state continues to prosper,” says Charles Kolstad, a Stanford University economist who was not involved in the new report.

The research, published by the public policy nonprofit Next 10, suggests California is emerging as the sixth largest economy in the world while becoming cleaner and greener. That fact sits in direct opposition to the principle now undergirding policy in Washington: that unbridled industry is a key ingredient to U.S. prosperity. “California, in many ways, is out of control,” President Trump has said, attacking the state’s policies straight on.

“The narrative that strict environmental policies that impact large parts of the economy are always bad is simply not the case,” says economist Adam Fowler, the report’s lead author. “These policies have pushed innovation, and innovation is always good in a capitalist system.”

The Trump administration’s MAGAnomics policy, introduced in July, promises to grow the U.S. economy by 3 percent annually in the coming decade through efforts such as welfare reform, renegotiating trade deals, and rolling back regulations. The last time the country grew at that rate was during the Reagan administration. During the Obama years, year-over-year GDP growth topped 2.5 percent only once, and economists predict actual growth in the near term at closer to 2 percent.

In trying to reach that 3 percent goal, Trump is rolling back several environmental regulations: The administration has already challenged the Clean Power Plan, attacked methane rules, and announced it would withdraw from the Paris agreement, among other measures.

But California is growing near the rate Trump desires while cutting emissions and putting more climate regulations in place. And Fowler asserts that environmental restrictions have actually opened up new markets for the state. According to the report, California leads the country in the number of clean-energy patents and has the most people employed in solar power generation of any state.

“That’s part of the California bet,” says Kyle Meng, an environmental economist at the University of California, Santa Barbara, who was not involved in the report. “If California can get it right here, domestically, these industries that are used to meet California’s climate policies can export these technologies.”

As California builds a profitable case for decoupling carbon emissions and growth, it could shift the global conversation about what conditions are necessary for economic progress. “That’s the number one purpose for California’s actions,” Kolstad says. “To demonstrate that you can stabilize carbon emissions and still have a prosperous economy.” (He does caution that any arguments suggesting that environmental regulations actually promote growth are probably exaggerated, as well.)

Still, California’s move toward a clean energy future is still a work in progress. Environmental justice groups oppose its recently extended cap-and-trade program, arguing it isn’t relieving the pollution burdening communities of color and low-income neighborhoods. And many environmentalists suggest the state needs to shed its reliance on natural gas.

Kolstad says California must strike “a happy medium” to plot the most economically favorable path forward. Emissions should be reduced at a steady pace, but it can’t result in job loss or cost too much, which might compel some Californians to turn against environmental action.

“Certainly Trump is trying to turn back things,” Kolstad says. “But this is a tide that’s not going to be turned back.”