For two days in early August 2014, the 400,000 residents in and around Toledo, Ohio, were told not to drink, wash dishes with, or bathe in the city’s water supply. A noxious, pea-green algae bloom had formed over the city’s intake pipe in Lake Erie and levels of a toxin that could cause diarrhea and vomiting had reached unsafe levels.

The bloom, like the others that form in the lake each summer, was fed by the excessive amounts of fertilizer nutrients washed into local waterways from surrounding farmland by spring and summer rains. Efforts are underway around the Great Lakes ­— as well as other places plagued by blooms, like the Gulf of Mexico and Chesapeake Bay — to reduce nutrient amounts to control the blooms, which can wreak havoc on the local ecology and economy. 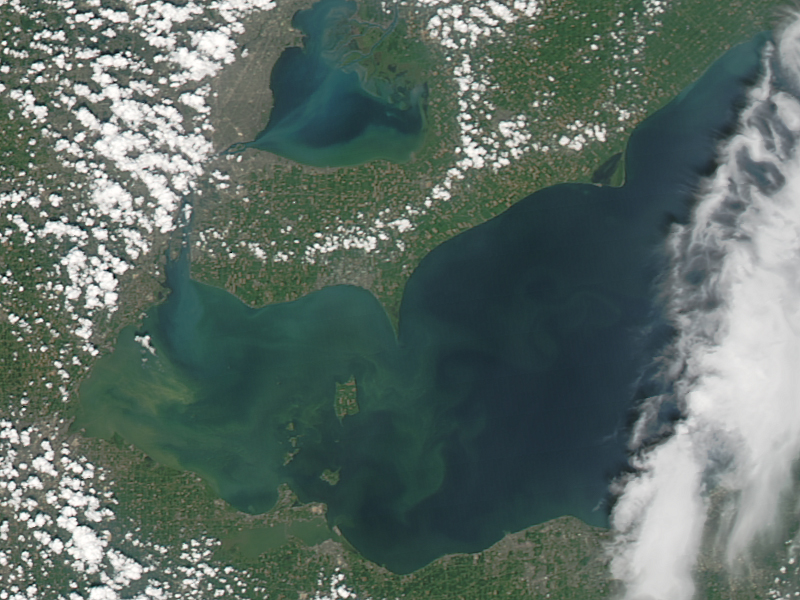 But new research shows that climate change is going to make those efforts more and more difficult. As warming temperatures lead to increases in precipitation, more nitrogen, one of those nutrients feeding the blooms, will be washed into the nation’s waterways, the work, detailed in the July 28 issue of the journal Science, finds.

The biggest increases in such nitrogen loading will likely come in the Midwest and Northeast, areas already seeing the biggest uptick in heavy downpours.

The findings show the urgency of coming up with policies to reduce nutrient overloads, and the importance of keeping climate change in mind when devising them.

“It really drives home the point that we need to do something now,” Tim Davis, who studies algae blooms at the Great Lakes Environmental Research Laboratory, said. He was not involved with the study.

Algae blooms are vast mats of microscopic organisms that, like plants, need sunlight, water, and nutrients to flourish. When an overabundance of nutrients like phosphorous and nitrogen from fertilizers are washed into lakes and coastal areas by rains, they can cause an explosive burst that forms a bloom.

Such blooms form each year in the Great Lakes, particularly in shallow Lake Erie, the Gulf of Mexico, and Chesapeake Bay, as well other areas. They can pose serious risks to public health from the toxins they release and can be poisonous to marine and lake life. When a bloom finally dies, it can also suck up all the oxygen in the water, creating what is called a hypoxic, or dead zone, that can also kill fish. 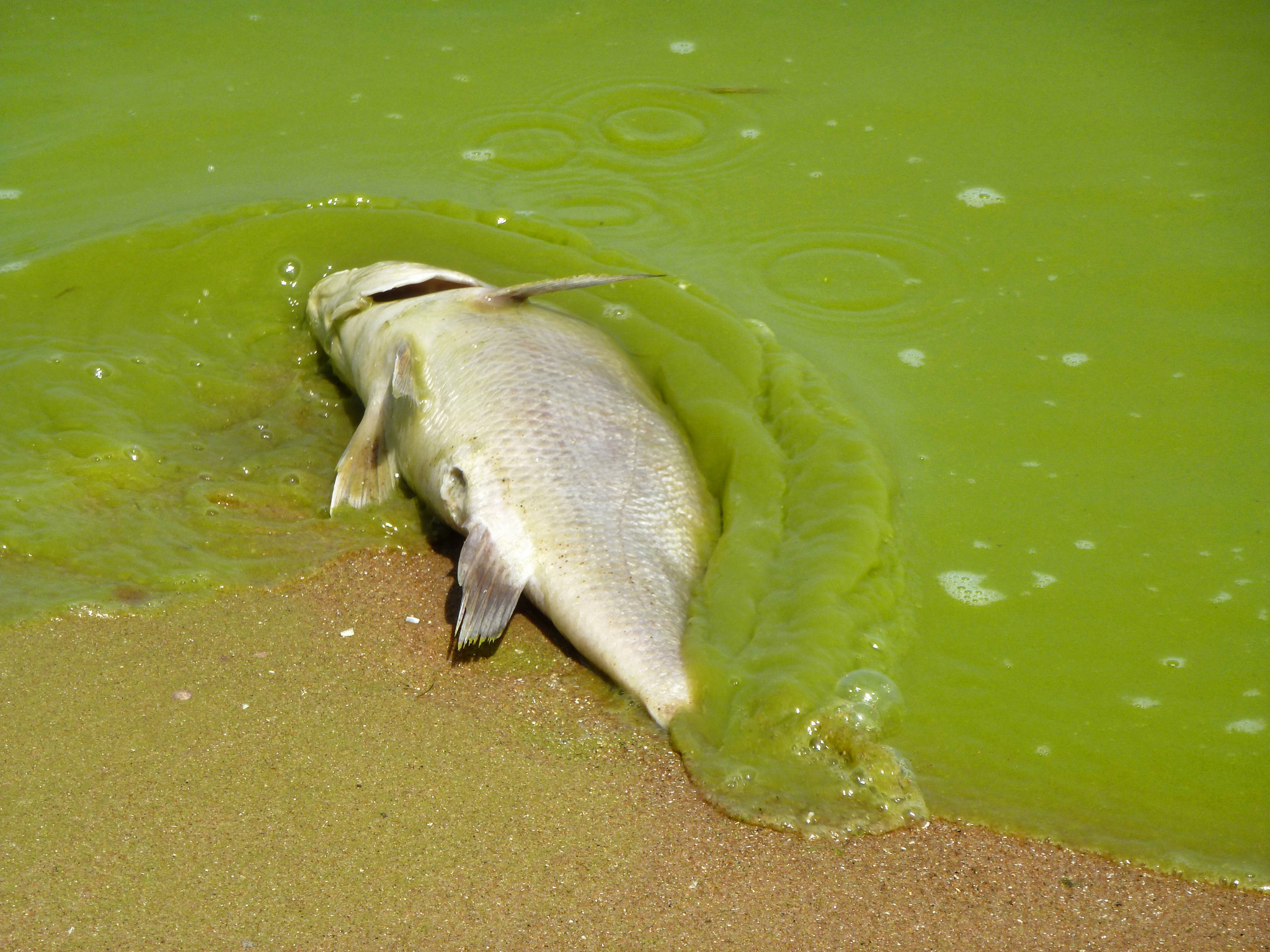 The impacts can have major economic ramifications, causing billions of dollars in damage to commercial fishing and recreational activities.

Nitrogen in particular plays a key role in fueling coastal algae blooms, and has been found to make the blooms in Lake Erie more toxic.

Most research to date on how changing climate conditions might affect algae blooms has been focused on particular basins and watersheds. The Great Lakes, especially Lake Erie, have been the focus of intensive study and the subject of a longstanding effort by the U.S. and Canada to reduce nutrient loads into the lakes.

Because not every area can get that kind of attention, Anna Michalak, of the Carnegie Institution for Science, and her colleagues wanted to get a bigger picture look at how climate change might alter how much nitrogen is washing into the nation’s watersheds and see if they could pinpoint the areas of greatest risk.

Using 21 climate models from the most recent Intergovernmental Panel on Climate Change report, they looked at how changes in both overall and extreme precipitation would influence the amount of nitrogen entering waterways, keeping things like fertilizer use constant.

They found that by the end of the century, if greenhouse gas emissions continue on their current trajectory, increased rainfall will cause a 20 percent rise in the amount of nitrogen loading in waterways of the continental U.S.

The largest increases were in the Northeast (with a 28 percent increase in nitrogen), the upper Mississippi-Atchafalaya basin (24 percent), and the Great Lakes (21 percent). That result wasn’t surprising given that the Midwest and Northeast have already seen heavy downpours increase by 37 and 71 percent, respectively, since 1958, the largest increases in the nation, according to the 2014 National Climate Assessment.

Nitrogen loading in the nation’s waterways averaged for 1976–2005 (a) and how precipitation will increase that loading by mid-century (b) and by the end of the century (c) if greenhouse gas emissions continue on their current trajectory. Sinha, et al./Science

To counteract the increase just from the influence of precipitation would mean that the nitrogen being introduced to the land would have to be reduced by 30 percent.

“That is massive,” Michalak said, and would be a significant ask of farmers struggling to maintain crop yields.

In the particular example of the Mississippi-Atchafalaya system, the EPA has already mandated that nitrogen loads be reduced by 20 percent below 1980–1996 levels. To meet that goal in the face of the increases coming from rains would mean reducing fertilizer use by a whopping 60 percent.

The study also looked to broaden the view beyond the U.S. by looking for watersheds around the world that were similar to some in the U.S. and seeing how nitrogen loading might change with precipitation. They identified India, China, and Southeast Asia — home to the majority of the world’s population — as areas that could see major rises in nitrogen loading in the future.

The study makes it clear that local managers and policymakers will need to rethink some of the ways they combat nutrient pollution and society will also have to develop technological solutions to reduce nutrient pollution, from implementing more efficient agricultural practices to potentially recycling various forms of nitrogen in sewage into animal feed, according to a commentary piece also published in Science.

If you want to manage nutrient loading “you need to account for the fact that the climate is changing at the same time,” Michalak said.