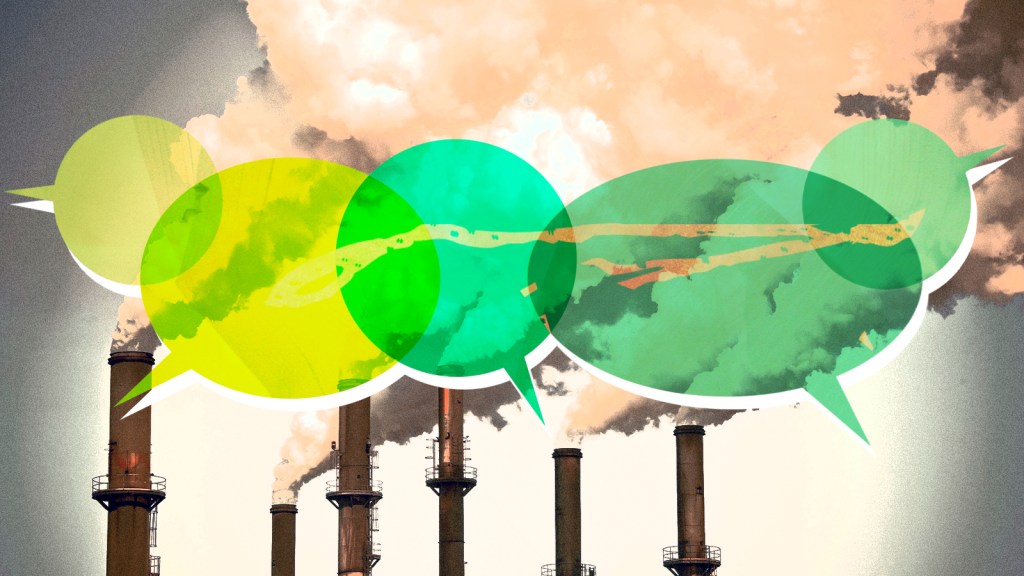 Forget “climate change” and “global warming”: Environmental advocates are increasingly using phrases that emphasize the urgency of our planetary pickle, such as “climate crisis,” “climate emergency,” and “existential threat.”

But do-gooders aren’t the only ones with savvy messaging techniques. Over the years, fossil fuel companies have poured millions into sowing doubt about climate science and burnishing their public image. Now, fossil fuel companies are reckoning with a different communications challenge: convincing their investors that the future of oil and gas companies is bright … or at least bright enough.

It may seem like a tough sell. After all, keeping warming limited to 2 degrees Celsius means phasing out the very commodity Big Oil is known for. A survey of European fund managers earlier this year found that 86 percent want oil companies to adopt policies in line with the goals of the Paris Agreement, and 24 percent think these companies should wind down their business and return money to shareholders.

More pressing threats are looming over the U.S. shale industry, which uses horizontal drilling and hydraulic fracturing (aka fracking) to extract oil from rocks. Some 26 oil and gas producers in the United States have filed for bankruptcy so far this year, and shale stocks are hovering near rock bottom. Even as the country’s oil production booms, shale companies have been dealing with big issues, both fiscal and technical, and investors are getting disenchanted.

In the face of these challenges, oil and gas companies are changing the way they talk to investors and the public. Based on an analysis of transcripts from the earnings calls of 40 public shale companies in the U.S., the Wall Street Journal and financial research firm Sentieo Inc. concluded that “fracking’s buzzwords have changed significantly” in the past four years, moving from a vocabulary of growth to one that promises to rein in spending.

“Ramping up” production is out; delivering on “free cash flow” is in. Translation: Companies are trying to reassure investors by bringing in more money than they spend, with the possibility of using the profit for stock buybacks or paying dividends. Not coincidentally, terms like “buyback” and “dividend” are also on the rise in earnings calls.

Oil companies have also shifted their vocabulary in recent years. They’ve begun using the phrase “climate change” less often in their corporate social responsibility reports, according to a paper published last year by Sylvia Jaworska, an associate professor of linguistics at the University of Reading, who analyzed nearly 300 corporate responsibility reports from BP, Exxon, and others from 2000 to 2013.

And when they did mention our overheating planet, oil companies used increasingly passive language. Back in 2007, when the use of “climate change” peaked in the corporate social responsibility reports, it frequently appeared next to “combat.” In more recent years, the few times that “climate” did show up, it often showed up near the word “risks” (more in the “threat to business” sense than the “threat to humans” sense, as Quartz pointed out).

Perhaps the fossil fuel industry’s greatest linguistic accomplishment? That our lexicon has come to normalize the role these polluting fuels play in our lives. For example, we talk about “hybrid” or “electric” cars, while gas-powered cars are just … cars.

If we want to build momentum for a low-carbon world, we need to make the harmful aspects of fossil fuels explicit in the language we use, argued Matthew Hoffman, a political science professor at the University of Toronto, in an article in The Conversation earlier this summer. That means saying things like “dirty, gas-powered cars; polluting, coal-fired electricity; unsustainable, oil-dependent agriculture.”

As for “freedom gas”? That’s definitely a no-go.