Atop a foothill on the southern edge of Morocco’s Atlas Mountains, an indigenous community has held what is believed to be one of the longest sit-in protests in history, blocking a pipe at a silver mine. Their prerogative is simple and familiar, especially in recent months: Protect their source of water, keep the pipe shut.

I learned of the protest when I attended the United Nations Climate Change Conference in Marrakech, Morocco, last year. The atmosphere at the meeting was hopeful — the gathered were still on a high from the Paris Accord, which was agreed to at the previous year’s Conference of Parties (COP) in the French capital. Even Donald Trump’s election couldn’t dampen most participants’ optimism for a future that would better protect communities vulnerable to disastrous environmental impacts.

Yet just outside the official talks — where Morocco was being credited with building solar fields and green mosques — local activists criticized the conference for its official partnership with the company Managem, which operates the silver mine at Imider, 200 miles east of Marrakech.

Residents of the seven villages of Imider — mostly Amazigh people, an indigenous group across north Africa also known as Berbers — claim that the nearby mine has depleted their underground water reserves. And they worry that contamination is causing recent instances of cancer and miscarriages among villagers.

“This is a contradiction because it’s Managem,” Omar Ouadadouch told me at his hilltop camp next to the mine pipeline. “It’s part of polluting this earth by extracting and using many chemical substances — many things that impact the earth, humans.”

Ouadadouch and others, including activist groups protesting at this year’s COP in Bonn, Germany, say the climate conference has “greenwashed” environmental injustices — and that the struggles faced by communities just outside its doors can illustrate what’s really at stake when the world meets to decide how far we’ll go to hold polluters accountable.

In 2011, Imider residents shut off a main water pipe leading to the Managem silver mine, the most productive in Africa. Next to the pipe valve that’s chained shut, the Amazigh activists built tiny stone and plaster homes and took up residence. They’ve been there for seven years — long enough to set up a working solar panel donated by an NGO. Managem has since found another route to supply water to its mine and continues to ramp up its production of silver each year.

Ouadadouch and others say that the mine has pulled extensively from the underground canals that villagers rely on to supply water to their homes and farming. The silver mine reportedly uses up to 12 times as much water as the villagers consume daily. And this is all taking place in a region where one of the most dangerous effects of climate change is drought. 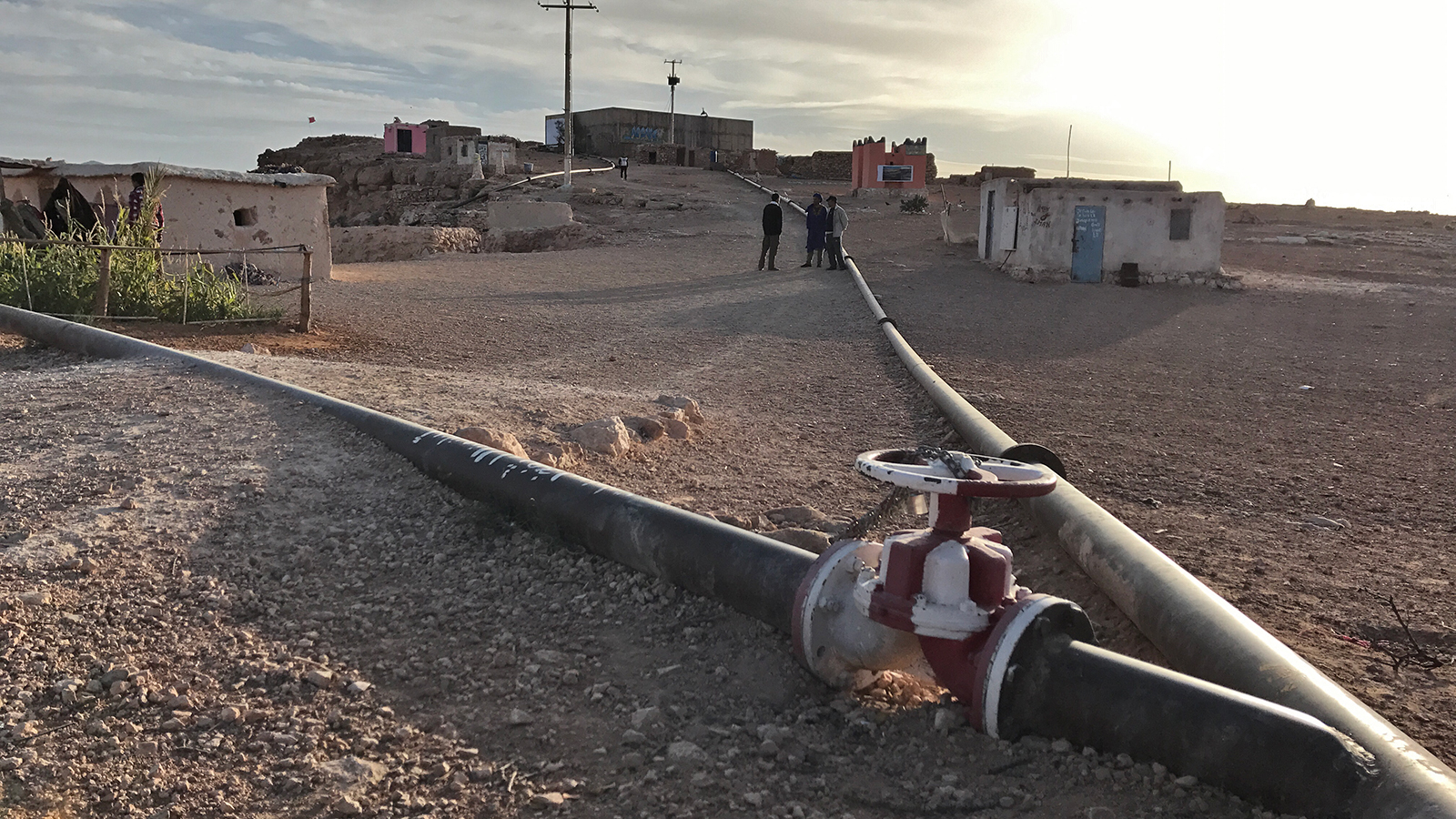 The pipe valve that the Berbers at Imider chained shut sits in front of several makeshift homes set up as part of a years-long protest. Justine Calma

Water contamination is also a worry. The mine at Imidir uses cyanidation — a process used to extract gold and silver from low-grade ore. It’s a controversial method that’s banned in some countries and U.S. states because of its potential to contaminate nearby water sources. It’s legal in Morocco, however, and Managem says it complies with national regulations. The company also maintains that it tests the water regularly and has never come across any problems.

When I visited Managem’s booth inside last year’s climate conference, I spoke with Ismail Akalay, the company’s general manager of mining. He claimed that Managem had gone through 17 rounds of negotiations with the activists — but that Omar and his fellow villagers weren’t interested in coming to a viable compromise.

Omar and other villagers refuse to abandon their sit-in until they are assured the mine will operate in a way that protects the area’s natural resources. They don’t actually want to shut the mine down. They want to coexist, and they hope the mine can operate safely and sustainably while providing more jobs for local youth.

An hour’s drive outside of Bonn, where this year’s U.N. climate talks are wrapping up, the entire village of Immerath — down to the bones in its cemetery — is being bulldozed over to make room for a coal mine.

Forty percent of Germany’s electricity is still generated by burning coal, and this year’s climate talks opened as thousands of protesters occupied the Hambach lignite mine. Hambach and nearby mines produce a yearly output of 30 million tons of brown coal, an even dirtier fuel than black coal.

“Mining and the use of brown coal is destroying people’s home,” Antje Grothus of the Climate Alliance Germany said in a statement released during the Bonn COP. “It is the most climate-damaging energy source fueling climate change. It cannot go on this way.”

Grothus used the occasion of the conference to try to bring attention to the damage coal mining wreaks on villages like Immerath. Imider’s residents took the same opportunity to tell their story to a global audience in Marrakech the previous year.

Fadma El Khalloufi made the journey from Imider to Marrakech to protest. “We discovered many kinds of allergies we never discovered until the mine was there. Cancer as well, five women died from cancer recently,” the then 57-year-old woman told me through a translator. “There is no hospital, there is no ambulance. And whenever a woman gets sick there they have to take her to a far big city.”

A year later, the Berbers near the silver mine are still demonstrating. On Sunday, roughly 400 people joined in a march with Imider’s activists. They are now concerned because Managem announced this year that it plans to up its silver production from 250 metric tons to 300 metric tons by 2020.

The Imider group claims to represent 8,000 residents among its seven local villages, but they’re now connected to movements around the world — including Native Americans who protested at Standing Rock and and met with mine demonstrators while attending the Marrakech summit. Whether or not the decision makers whom activists from Imider to Immerath target turn a blind eye, the people involved in fighting for injustice globally do hear each other.

“For us, and toward other protests,” a spokesperson for the Imider camp told me Tuesday, “we declare our solidarity with all social movements and resistances.”

This story was reported with support from The GroundTruth Project, a media nonprofit dedicated to developing a new generation of journalists and to adding increased knowledge and understanding on critical global issues through enterprise journalism.