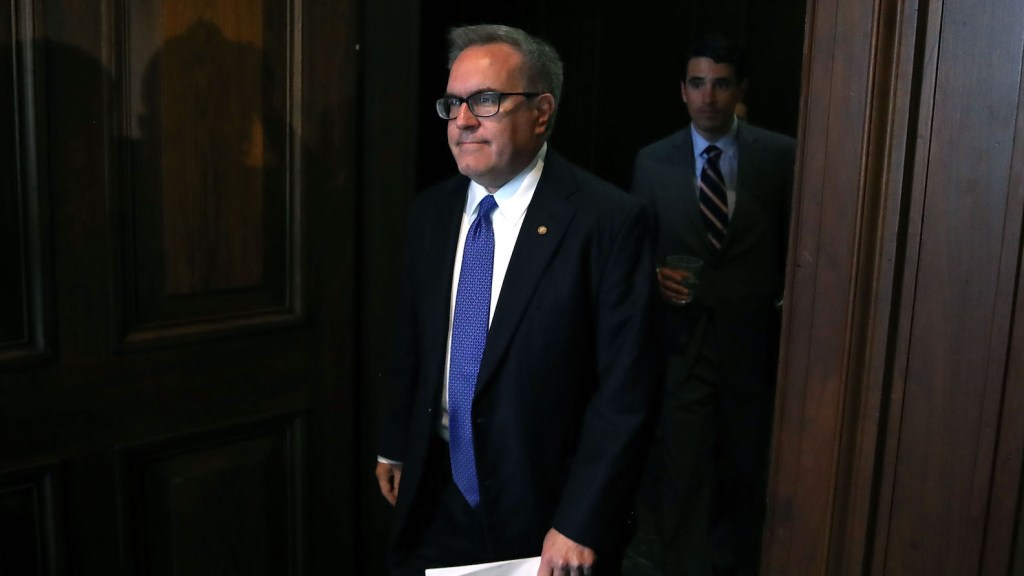 This story was originally published by the Huffington Post and is reproduced here as part of the Climate Desk collaboration.

Andrew Wheeler, the new head of the EPA, is facing his first call for an ethics probe less than three weeks after taking over in the wake of scandal-plagued former Administrator Scott Pruitt’s abrupt resignation.

On Thursday afternoon, E&E News reported that Wheeler, who a year ago worked as a coal and mining lobbyist, met with former clients at least three times since he was sworn in as deputy EPA administrator on April 20. The meetings appear to violate the Trump administration’s ethics pledge and break explicit promises Wheeler made to avoid conflicts of interest.

In a statement to the Huffington Post on Thursday evening, Representative Don Beyer, Democrat from Virginia — the No. 2 Democrat on the House Committee on Science, Space, and Technology and the ranking member of its subcommittee on oversight — said the Office of Government Ethics should open a review.

“As a former coal lobbyist, and as the successor to scandal-tarred Scott Pruitt, Andrew Wheeler should know better than to break his ethics pledge,” he said. “If these reports are true, he did so repeatedly. This is a matter which the Office of Government Ethics should examine.”

Late last month, the day before telling Bloomberg News he didn’t “think it’s appropriate for me to participate” in meetings with clients for whom he’d lobbied, Wheeler participated in a “stakeholder meeting” with Darling Ingredients, a biodiesel producer and his second-largest former client after coal giant Murray Energy.

Wheeler also met with Archer Daniel Midland Co., an agribusiness that spent more than $5,000 for Wheeler’s “strategic advice and consulting,” and the South Coast Air Quality Management District, a Southern California regulatory agency that paid Wheeler’s former firm at least $600,000 for lobbying between 2010 and 2012.

The EPA did not respond to the Huffington Post’s request for comment on Thursday night. But the agency told E&E News that the meetings did not violate the ethics agreement because the groups Wheeler met with were not among the eight former clients he’d pledged to avoid for at least two years.

Senator Sheldon Whitehouse, a Rhode Island Democrat who was one of Pruitt’s fiercest critics in the Senate, stopped short of calling for an investigation but said Wheeler “should be making extra efforts to reestablish the public’s trust in EPA.”

“Even if these meetings were permitted under ethics rules, he has demonstrated poor judgment so early in his tenure,” Whitehouse told the Huffington Post. “I hope this isn’t the sign of what is to come from the acting administrator.”

Beyer led congressional investigations of Pruitt, who resigned in disgrace earlier this month amid more than a dozen federal probes, including reviews from the Office of Government Ethics.

Wheeler has faced other challenges, though most have been left over from Pruitt.

On July 13, Democrats demanded that the House Committee on Oversight and Government Reform issue a subpoena forcing the EPA to turn over documents related to Pruitt’s efforts to delay the release of public records. The call came in response to newly released congressional testimony that showed that EPA Chief of Staff Ryan Jackson seemed to be slow-walking Freedom of Information Act requests deemed “politically charged” or sensitive by passing them off to political appointees.

Two days earlier, Wheeler appointed Henry Darwin, the EPA’s chief of operations, as acting deputy administrator, making him the agency’s new No. 2 official. The promotion drew criticism after emails cited by ABC News showed Darwin helped his wife, Veronica Darwin, get a job at the agency as part of his salary negotiation for his previous position last year. Pruitt’s use of his office to obtain work for his wife, Marlyn Pruitt, was one of his final high-profile personal scandals before his departure.

Last Thursday, 16 state attorneys general sued the EPA over its decision to allow semitruck manufacturers to keep producing “super-polluting” glider trucks — new truck bodies and cabs with salvaged engines and chassis. Pruitt granted the loophole in his final hours before leaving the agency.

In a reversal, the EPA withdrew the glider truck rule late Thursday night.