Race matters in the crackdown on environmental protests - Grist 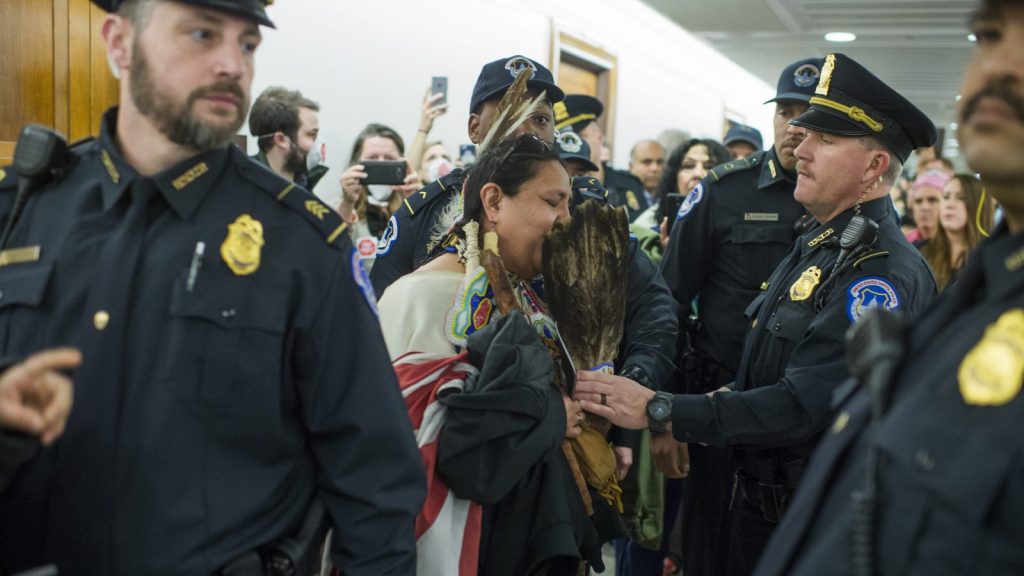 Race matters in the crackdown on environmental protests

As she strode into the Kirkwood Mall in Bismarck, North Dakota, on the day after Thanksgiving 2016, Laura Gracia noticed several vans parked outside. At first, she didn’t think much of them. After all, it was the most popular shopping day of the year.

Gracia wasn’t there to buy anything. Instead, she was on her way to attend a prayer circle and to distribute pamphlets to spread awareness of the campaign opposing the Dakota Access Pipeline, the nearly 1,200-mile project that would pass under the primary water source of the Standing Rock Sioux tribe.

Not long after she entered the mall, Gracia was riding in one of the vans — which turned out to be police vehicles — with her hands tied. Her arrest came as the protests at Standing Rock, 100 miles south of Bismarck, were in the national spotlight. Images had streamed out via social media of the activists assembled, widely known as water protectors, being drenched with hoses and pelted with rubber bullets.

Gracia, an organizer with the California-based grassroots group Communities for a Better Environment, and three others had come to North Dakota to support the #NoDAPL fight. They were running late to the prayer circle, and once they entered the mall, they saw that police were already arresting demonstrators and herding them out.

She linked arms with other protesters, and took out her phone to record the scene. Soon after, she recalls, a police officer reached out to grab her phone. “I didn’t let go of the phone,” she says, “and they brought me down.”

Since Trump was elected, more than 60 bills have been introduced across 31 states that could severely restrict people’s right to protest. These include pieces of legislation that would make “conspiracy” to disrupt pipeline operations a felony punishable by up to 20 years in prison, as well as broadening the definition of “domestic terrorism” to acts that affect structures such as pipelines.

North Dakota has passed three bills that civil rights advocates say restrict the right to protest. The laws, according to a statement released by Governor Doug Burgum last year, are “designed to protect landowner rights” and “deter criminal activity.” But many in the advocacy community say these efforts to heighten the policing and criminalization of protest could not only stifle organizing efforts, but disproportionately target people of color.

Vera Eidelman, a fellow with the American Civil Liberties Union, says the surge in anti-protest bills seems to be a response to movements like Black Lives Matter and Standing Rock. Both these movements were led by people of color, she notes.

“It basically looks like a lot of the legislation is reacting to the most successful forms of protest in recent history,” Eidelman says. “A lot of the tactics used against environmental protesters — framing them as terrorists or saboteurs — are things that we’ve seen used against many oppressed and marginalized voices, often including activists of color.”

Amnesty International shared a video of Gracia’s 2016 arrest. When she watches it now, Gracia wonders why she was arrested while others weren’t — and whether the color of her skin played a factor in her being taken into custody. She remembers hearing racial slurs from shoppers watching the arrests take place. “Go back to where you came from,” she says someone screamed at her.

“I was probably the darkest of the folks in the [human] chain,” recalls Gracia, whose family migrated to the United States from Mexico. A spokesperson for the Kirkwood Mall said that the arrest of 33 people, including Gracia, there on Black Friday was part of an effort to “protect our shoppers and make sure the operations of the shopping center are upheld.”

Just a few days later, then-governor of North Dakota, Republican Jack Dalrymple, issued a mandatory evacuation order to protesters camping at Standing Rock. The Army Corps of Engineers — which granted Dakota Access developer Energy Transfer Partners a final permission to finish construction — would follow with an ultimatum: Abandon protest camps on Corps-managed federal land or risk “violent confrontation” and arrest. Protest camps disbanded, but activists said they continued to to be targeted for their opposition to the pipeline.

Attorney Michelle Cook is a member of the Navajo nation who co-founded the Water Protector Legal Collective. Along with the University of Arizona Rogers College of Law, Cook’s group recently submitted a report to the United Nations calling attention to the suppression of protest, which it says disproportionately impacts Native Americans.

“Since the encampments, there has been criminalization of indigenous people and it breaks my heart that so many of my friends and loved ones are still impacted today,” Cook said during a panel at the United Nations Permanent Forum on Indigenous Issues, which convened in New York in April.

All seven of the defendants facing federal charges for their opposition to the Dakota Access Pipeline are indigenous. There were 832 criminal cases filed against water protectors in North Dakota between September 2016 and February 2017. The Water Protector Legal Collective believes many of the accused are Native Americans who often struggle to find legal representation.

“There is a lack of legal resources and legal support for indigenous peoples generally — so if you add on top of that this wave of criminalization, who in fact is going to be representing them?” Cook says in an interview with Grist. “How do they afford legal services?”

Laura Gracia ended up pleading guilty to criminal trespassing for her involvement in the Kirkwood Mall. She was told the charge would be dropped from her record within a year, and that her guilty plea would allow her to avoid jail time. Ultimately, Gracia says, she took the plea deal in part because she didn’t want to face a North Dakota jury.

“I felt very uncomfortable about having a jury trial,” she explains. “I remembered how people were treating me.”

In February of last year, North Dakota passed a bill expanding the scope of the criminal trespass charge Garcia was brought up on. Under the new law, protests or other gatherings on private property can be defined as criminal trespass even if notice against entering or remaining on premises without permission is not posted or verbally stated but “is clear from the circumstances.” Offenders could face 30 days in jail and a $1,500 fine. But opponents to the bill say the law infringes on the right to protest and a free press by making anyone subject to trespass charges even if it isn’t explicit that they aren’t allowed to be on a particular property.

Gracia, who’s says she’s now “hyper aware” of legislative efforts to raise the legal stakes for protesters, says criminalization is one of the the daily burdens indigenous folks and fenceline communities bear. And that’s why she’s still organizing and demonstrating against what she perceives as systemic injustices.

“And I’m much more careful.”