Beekeepers are breeding a race of superbees at the Seattle airport 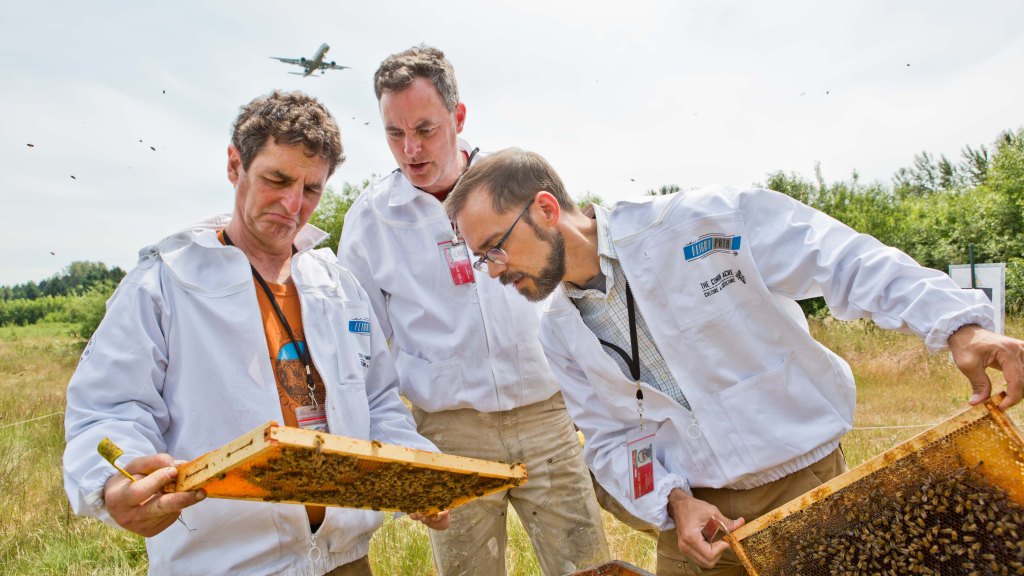 Beekeepers are breeding a race of superbees at the Seattle airport

It’s a sunny June day and I’m standing in a lovely meadow. Birds are singing, flowers are in bloom, and the temptation to lay out a blanket and have a picnic is strong. In fact, if not for the occasional roar of a 747 overhead, you would never guess that you were right next to one of the busiest airports in the country.

Meet the superbees of Sea-Tac.

It’s pretty clear by now that bees are in peril: Threatened by colony collapse disorder, their long-term survival is in jeopardy. So the Port of Seattle has joined forces with local nonprofit Common Acre to establish Flight Path, a project that will turn the unused green spaces on the south end of Sea-Tac into native pollinator habitat — and in the process, produce a breed of bees that will be better suited for survival in the coming years.

Beekeeper Bob Redmond, the founder and executive director of Common Acre, sees a lot of parallels between bees and airports. Take the bee’s waggle dance: “That’s their navigation system,” Redmond says. Forager bees use the waggle dance to direct other bees in the hive toward food sources. “It’s like the air traffic controller giving instructions. It’s their way of saying, ‘Use runway 16!'”

Bees also have complex systems of transportation, collection, delivery, and warehousing. “All of these things humans have figured out — but fairly late in the game, evolutionarily speaking — the bees have been solving for eons,” he says. “Like, it’s all here, in these boxes.”

The boxes he is pointing to are just a few of the 25 hives on green space surrounding the airport that can house up to 1.25 million European honeybees at the height of the season.

“They’re pretty mellow today,” Redmond says. “Right now they’re totally disinterested in everybody. But it’s good that you have your hair up, because they might get stuck in there.”

“Oh. Sure. Ok,” I reply, trying to play it cool while thinking back to painful stings of summer camps past, and really beginning to regret washing my hair the night before with lavender-scented shampoo.

After stints working in the nonprofit and arts world, Redmond became intrigued by the plight of the bees after reading about colony collapse in the newspaper. “It sounded really serious,” he says. “It was a food system issue. And at the same time, bees are fascinating, and the more I read about them the more I got drawn in.”

After starting with a couple of hives in his yard, Redmond founded the Urban Bee Company, which produces local and sustainable honey and serves as an information hub for other urban beekeepers. Redmond became inspired by the bee apiary project at Chicago’s O’Hare airport in 2011. Noticing all the green space while flying over Sea-Tac one day, Redmond thought he could try a similar project here. Redmond called the Port of Seattle with his idea and the Flight Path project was quickly born.

Surrounding Sea-Tac is about 116 acres of wildlife and wetlands. Port of Seattle’s wildlife biologist Steve Osmek sees the honeybees as the hook that gets people interested in the wider conservation effort at the airport that addresses the declining numbers of all sorts of local pollinators — not just bees, but also butterflies and hummingbirds.

“The airport is 3,000 acres, and granted 13 million square feet of that is concrete,” he jokes. “But what we’re working on is to really transform the south end of this airport right now into something that’s valuable for pollinators.”

But what really sets the Sea-Tac pollinator initiative apart from other airport apiaries is that this is a full-fledged conservation effort: they’re actually trying to selectively breed more genetically vigorous bees that are adapted to the regional Pacific Northwest area.

“It’s easy to set up a few colonies, and just say, ok, now we have some honeybees,” Osmek says. “We’re contracting Bob to not only establish the honeybee colonies, but also to think more into the future. You know, how can we provide a good resource of queens that are specifically acclimatized to the Pacific Northwest, to increase their robustness and genetic diversity.”

And according to Bob Redmond, an airport’s green space is the perfect place to control the breeding area for building a better bee. So how will it work? Pump some Barry White into the hives and get this party started?

“I prefer Al Green myself,” Redmond laughs. Actually, it’s balancing act of introducing the bees to other, heartier species. “We like wild bees. And feral bees, because those are survival colonies who are already attuned,” Redmond explains.

In addition to its conservation efforts, the Flight Path project aims to educate and inspire travelers in the airport via an art exhibit (in Terminal B, of course!). There’s also the Sing for the Bees benefit concert and recent bee hackathon, where techies developed a prototype for an app that travelers can use to compare their flight miles with the bees’.

Redmond hopes it will be an opportunity for travelers to connect with the world of bees and learn from them. “The thing that we can learn from the bees is the collective spirit of cooperation — and consumption,” he says. “Like each of us ‘in the hive’ has to realize that there’s an overall community ethic at work, and we can only eat what the hive can support. So that’s something that is not as easy to swallow, but vital to understand for our own future.”

You may now feel free to cue up Flight of the Bumblebee. Or maybe queue up this video and start a bee breeding revolution of your own: