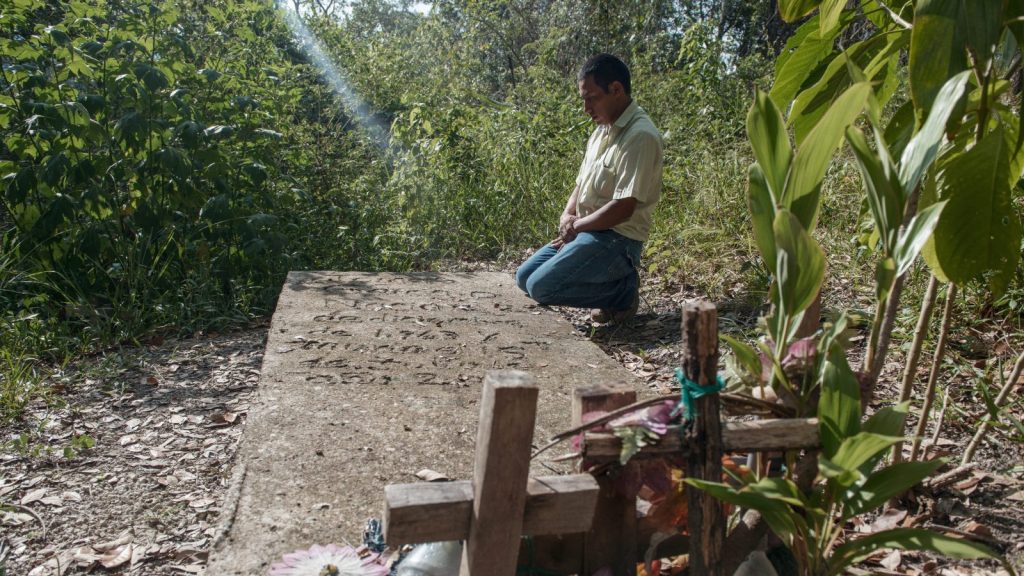 Tomas Gomez leader of the Civic Council of Popular and Indigenous Organizations ( COPINH) visits the grave of Tomas Garcia, who was shot dead by the military during a protest against the Agua Zarca dam. Giles Clarke / Contributor / Getty Images South America
dearly departed

In December 2018, the bodies of brothers Neri and Domingo Esteban Pedro were found along the banks of Guatemala’s Yal Witz River, shot in the head. The two had recently rallied against a dam in the Ixquisis region of San Mateo Ixtatán in the western part of the country.

Their fate was not unique. According to a newly released report from the non-governmental organization Global Witness, at least 164 environmental activists were killed in 2018 alone. The deadliest industries to oppose: mining (43 deaths), agribusiness (21 deaths), and dams and other water resources (17 deaths). Over half of the killings took place in Latin America.

Deaths linked to water advocacy — like the Esteban Pedro brothers’ — were particularly high compared to 2017, when there were only four documented deaths in that category. Although hydropower has been billed as “renewable energy,” many activists have taken issue with the fact large dams and reservoirs have displaced indigenous peoples and disrupted local wildlife. The report called out the violence linked to hydropower in Guatemala in particular, calling it “a plague.”

“They say we are terrorists, delinquents, assassins and that we have armed groups here, but really they’re just killing us,” said Joel Raymundo, a member of the Peaceful Resistance of Ixquisis movement, in a statement alongside the report.

Globally, the report found a marked increase in the use of laws and policies aimed at quelling campaigns to protect the environment and indigenous peoples’ lands by enacting harsh penalties for protesters. “The rise of populist strongmen around the world has brought a clampdown on protest, often under the pretense of protecting national security or fighting terrorism,” the report said.

That seems to be the case in the Philippines, which led the world in the most “environmental defenders” murdered in 2018. President Rodrigo Duterte has made headlines for the body count associated with his “war on drugs,” which has resulted in the extrajudicial killings of thousands of alleged dealers. Activists say that brutality has extended to those defending indigenous peoples’ lands and the environment.

In 2018, Victoria Tauli-Corpuz, the United Nations special rapporteur on the rights of indigenous peoples, was placed on a list of some 600 people the Duterte administration sought to declare as “terrorists” by the Duterte administration. “This was in retaliation for me speaking out against indigenous rights violations in my home country,” she said. She was removed from the list in August at the urging of the United Nations and international human rights groups.

“This is a phenomenon seen around the world: land and environmental defenders are declared terrorists, locked up or hit with paralyzing legal attacks, for defending their rights, or simply for living on lands that are coveted by others.”

In Texas, interfering with a pipeline can land an activist with a felony charge, a decade in jail, and $10,000 in fines. Similar policies are popping up across states from Louisiana to the Dakotas, as Grist’s Naveena Sadasivam has reported.

Daniel Sheehan, an attorney with the Lakota Law Project, which provided legal defense to Standing Rock protesters, told Grist in January that the new laws are using a new twist on old fear-based rhetoric to undermine activists: “Instead of communist, they now call you a terrorist, anybody who’s opposing the capitalist system … What you get is this thing called industrial terrorism, these statutes that say if you do anything which is a direct action to attempt to impede a corporation from being able to pursue its business and to make its profit, that is terrorism.”