The subject of our overheating planet didn’t come up much in Kyle Meyaard-Schaap’s home when he was growing up, but when it did, it was usually the butt of a joke. He was raised in a “very pious” home in Holland, Michigan, where he learned the names Jesus, Joseph, and Abraham before Cinderella and Snow White. “The overwhelming memory for me growing up was the complete disconnect between my faith and the natural world,” he said.

The 30-year-old Meyaard-Schaap now lives in Grand Rapids, a short drive away from his hometown. He’s ordained in the Christian Reformed Church, with what might seem like an unexpected focus. He spends his days speaking out about how to overcome the climate crisis — at Christian college campuses, with church leaders, and in op-eds for religious publications. He’s the national organizer and spokesperson for Young Evangelicals for Climate Action, a nonprofit that’s looped more than 20,000 young people into its campaign since it started in 2012.

Meyaard-Schaap is one of a growing number of Christians raising an alarm. Across the country, young conservatives are breaking ranks with their parents over the pressing problem of our overheating planet. Among Republicans, more than half of millennials accept that global warming is real, and they’re more likely than older generations to say that it’s caused by human activity and worth worrying about, according to research from the Yale Program on Climate Change Communication.

“A lot of younger folks are recognizing the existential threat that this poses to us and to the families that we’re starting or want to start,” Meyaard-Schaap said. “The stakes are higher than ever for a generation that’s finding its voice and starting to claim power in the church, in politics, and in society.”

For Meyaard-Schaap, the awakening came in high school, when his older brother, Brian, returned from a formative semester abroad in New Zealand with some shocking news for his meat-and-potatoes family: Because of religious and environmental concerns, Brian was going vegetarian. “I literally knew nobody who had ever made that choice,” Meyaard-Schaap said of his brother’s decision. “In my mind, I created this group of people [vegetarians] who were like weird hippies and throwing red paint on fur coats on the weekends — people I felt no connection to or no solidarity with at all.”

Over the next few years, he began connecting the dots between his faith and the environment. During a college service trip to West Virginia, he stayed with nuns who had to collect rainwater for drinking since their aquifer had been cracked and contaminated from mountaintop removal mining taking place nearby. He saw firsthand that families living near these operations were suffering from high rates of cancer.

“I can’t love my neighbor if I’m not protecting the earth that sustains them and defending their rights to clean water, clean air, and a stable climate,” Meyaard-Schaap said.

In 2013, he started volunteering with Young Evangelicals for Climate Action in 2013. The organization had been founded a year earlier by a group of young people in collaboration with the Evangelical Environmental Network.

“We had to start really basic and almost explain why we’re not atheists, why we’re not socialists,” Meyaard-Schaap said. But in the last seven years, he’s seen a shift. For the most part, young evangelicals already get the basics of the science. They just want to know what they can do about it. 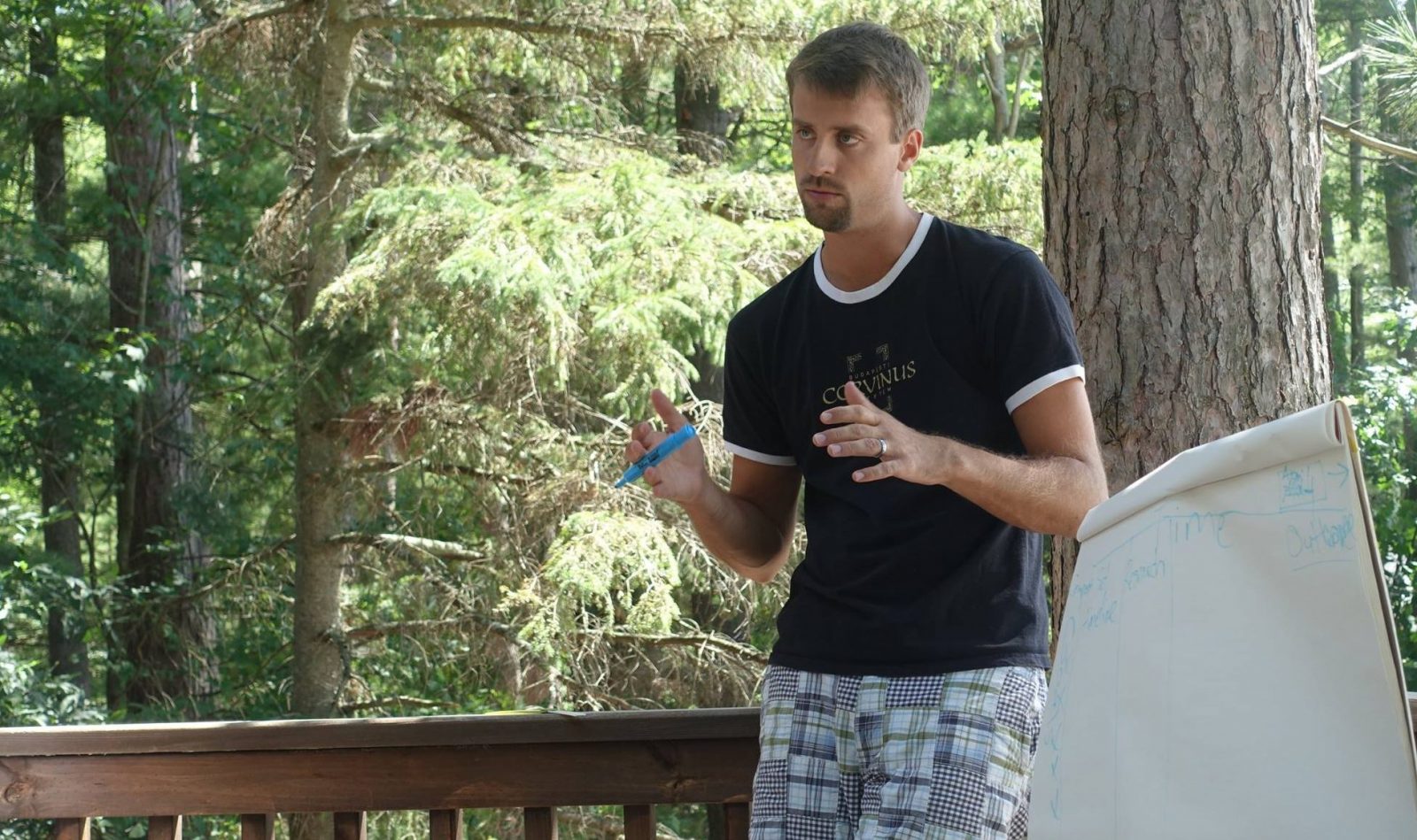 The National Association of Evangelicals — a group that represents 43 million Americans across 40 different denominations — adopted a statement in 2015 that recognized climate change as a threat to “the lives and well-being of poor and vulnerable people” and called on its members to take action. The move came after Meyaard-Schaap’s organization sent hundreds of letters to the executive committee asking them to show leadership on the issue.

A number of prominent evangelicals have spoken out about “creation care,” arguing that they should take care of the world God created. There’s Richard Cizik, former vice president for government affairs at the National Association of Evangelicals; Katharine Hayhoe, a climate scientist at Texas Tech and public speaker; and Charlotte Keys, a pastor in Mississippi, among others.

Still, the campaign to turn climate change into an evangelical issue has met some roadblocks (aka talk show radio hosts) over the years. One big push in the mid-2000s, mainly driven by evangelical elites, failed to overcome opposition because it hadn’t drummed up enough grassroots support, according to a report by the nonpartisan think tank New America in 2015. The report said there was the need for “a softer track that breaks through partisan polarization and builds a grassroots base among rank-and-file evangelicals,” with a focus on individual congregations and evangelical universities, “the places where the next generation of evangelicals are learning what it is that their faith commits them to do in the public sphere.”

That’s exactly where Young Evangelicals for Climate Action has stepped in. “My sense is that they are probably doing some of the most promising and savvy work in this space, particularly because they are focused on the population where I think there’s actually an opening,” said Katharine Wilkinson, author of Between God & Green: How Evangelicals Are Cultivating a Middle Ground on Climate Change.

“The best messengers are sons and daughters, they’re grandkids, they’re young people who grew up in the church,” Meyaard-Schaap said. “They see someone like them who they love and respect, who’s involved in the story and can invite them into it in a way that resonates with them.”

It’s an approach supported by other recent research from the Yale Program on Climate Change Communication that shows personal connections are stronger than political divisions. One study from North Carolina State University found that middle school-aged kids who learn about climate change are effective at fostering concern for the topic among their parents, particularly conservative parents.

When efforts to engage evangelicals in climate activism have failed, it’s because of a lack of “true listening,” Meyaard-Schaap said. “The climate movement has essentially communicated that in order to be part of this movement, it’s best to be like ‘us.’ And that usually means more liberal, more progressive.”

Most of the resistance to accepting climate change as a concern that he’s encountered is political, he said, not theological. “Look, you don’t have to like Al Gore to care about how you’re going to feed your family, or to care about your neighbor who has asthma down the street,” he assures people.

The media often depicts all-out warfare between religion and science, but plenty of Americans have found ways to reconcile the two. A Pew Research poll from 2015, for example, showed that two-thirds of Americans don’t see any conflict between their personal religious beliefs and science. Meyaard-Schaap said young evangelicals in particular have been open to his message that caring for God’s creation “is part of what it looks like to follow Jesus in the 21st century with integrity.”

His organization coaches young people on how to talk to older folks — including their parents — about climate change, too. “Helping evangelicals connect their passion for protecting vulnerable life to the issue of fossil fuel combustion gets us a lot of purchase in our community,” Meyaard-Schaap said. When people tell him that focusing on climate change feels like a distraction from what they consider a bigger issue — abortion — he’ll point to evidence that when pregnant women breathe polluted air, contaminants like soot reach the placenta, leading to health problems for babies. Pushing for clean energy, he said, also protects the unborn.

One deeply conservative veteran in the Climate Leaders Fellows program with Meyaard-Schaap’s organization came back from his second tour of Iraq “super on fire” about climate change. He had started noticing that the desert was creeping into areas it wasn’t during his first tour, did some digging, and came to the conclusion that climate change was behind it.

“He didn’t stop being a veteran, he didn’t stop being a libertarian, but he advocated for solutions that were consistent with those identities and with his values for loving and caring for his neighbors, particularly his Iraqi neighbors whose livelihoods were being affected by the desertification of their land,” Meyaard-Schaap said.

Instead of getting better and better at articulating a message that resonates with the same old group of people, Meyaard-Schaap says, climate advocates have to get better at speaking to people who are different from them.

And though it “wasn’t super smooth” at the beginning, Meyaard-Schaap and his brother eventually figured out how to talk to their mom and dad about climate change. His parents were able to put their misgivings aside and take what their kids were saying seriously. “They would still identify as politically conservative today,” he said, “but they would also identify as people who are concerned about the reality of climate change and are doing what they can about it.”

When Meyaard-Schaap was coordinating activities at the Paris climate conference in 2015, his mother phoned the office of Fred Upton, her Republican representative in Congress, to say that she was following the negotiations closely as a Christian and wanted to see him support the deal. “As far as I know, and definitely on climate change, that was the first time she had done something like that,” Meyaard-Schaap said.

Burn. Build. Repeat: Why our wildfire policy is so deadly