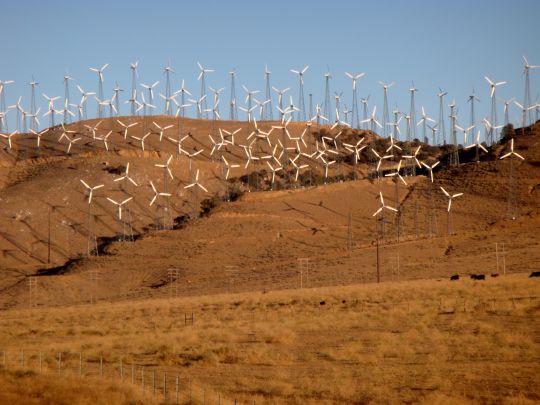 That giant sucking sound you hear on the West Coast these days is the state of California, hoovering up as much renewable energy as neighboring states can produce. The latest development: a proposal from four major energy companies to build an $8 billion wind energy farm in Wyoming to power the city of Los Angeles.

Within the next decade, some cities like L.A. are expected to see power needs increase by as much as 18 percent, and a lot of that energy needs to be clean. The state has some of the most ambitious renewable standards in the entire country: By 2020, nearly a third of its power has to come from renewable sources.

Though the wind project would be supplying power to Southern California, all of it would be sourced from outside the state. Bloomberg reports:

The project includes a 2,100-megawatt wind farm in Wyoming, a 525-mile (845-kilometer) power line and a $1.5 billion storage facility, the developers said today in a statement. Duke-American Transmission, a joint venture of Duke Energy Corp. (DUK) and American Transmission Co., Dresser-Rand Group Inc. (DRC) and two others will propose the project to the Southern California Public Power Authority by early 2015.

This project would be the 21st Century’s Hoover Dam — a landmark of the clean energy revolution,” Jeff Meyer, managing partner of Pathfinder Renewable Wind Energy, said in the statement.

All told, the wind project is expected to produce about 9.2 gigawatt-hours per year. To compare, the Hoover Dam, which supplies hydroelectric power for Nevada, Arizona, and California, produced an annual average of 4.2 gigawatt-hours of electricity from 1999 to 2008.

Officials are still grappling with the “renewable energy paradox” — finding the balance between the push for clean energy and its unintended environmental consequences. A day before Bloomberg’s coverage of the proposed wind project, officials announced plans to parcel out 22.5 million acres across Southern California deserts like the Mojave for large-scale energy projects and new habitat conservation areas, amid reports birds being scorched mid-air at the state’s Ivanpah solar plant near the Nevada border.

There’s no word yet on the potential environmental impacts of the proposed wind farm and if passed, it probably wouldn’t be completed until at least 2023. But for now, Hoover Dam, enjoy the limelight as one of America’s most beloved feats of engineering. Your days as a tourist trap could be numbered.