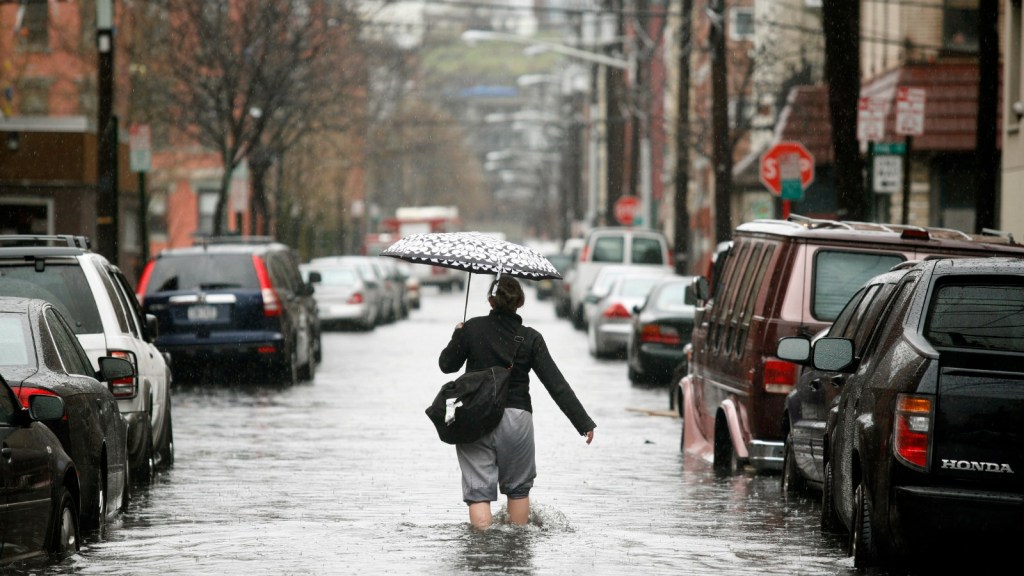 Last summer, just weeks after being crowned the Republican Party’s presidential nominee, Donald Trump scored major political points by visiting flood-ravaged southern Louisiana. The flooding was America’s worst natural disaster since Hurricane Sandy, and yet, President Barack Obama had not yet interrupted his vacation to tour the damage. Hillary Clinton, the Democratic nominee, hadn’t visited either. Victims felt ignored. But some saw hope in Trump. “It just lets you know that somebody on the national level is doing something,” flood victim Sandra Bennett told the New York Times. Reverend Bill Engelhart told the Los Angeles Times, “[Trump] really cares, and this is his way of showing it.”

A decision Trump made Tuesday, nearly a year to the day after his Louisiana visit, suggests otherwise: He signed an executive order that, among other things, rescinds flood protections for federally funded buildings and infrastructure. First reported by E&E News, Trump’s order undoes an Obama-era executive order that required new public infrastructure projects — like subsidized housing, hospitals, and fire departments — to be built a few feet above the so-called “100-year floodplain,” or the height at which there is a 1 percent chance you’ll experience an enormous flooding event. The requirement accounts for future sea-level rise predicted by “the best-available and actionable science,” the order reads.

As the Washington Post noted in 2015, Obama’s order was the first time the federal government took sea-level rise projections into account, instead of relying only on historical data. It was also the rare climate change policy that was praised by both conservative and progressive interest groups. That’s because sea levels are undeniably rising. Conservatives might always deny and fight about the fact that humans caused that sea-level rise, but adaptation to storms and flooding is far less controversial that ascribing blame to humans and acting to prevent it. Groups on the right and the left also mostly agree that it’s dumb to spend taxpayer dollars on expensive projects that are at a high risk of being destroyed by natural disasters.

But Trump is on a mission to undo as many of Obama’s policies as possible, no matter now reasonable they were. In a press conference announcing his executive order — the same press conference in which he again blamed “both sides” for the fatal violence in Charlottesville — Trump said approvals for new infrastructure projects take too long because of the regulatory process. Trump wants to spend $200 billion on infrastructure projects, including repairing bridges and roads, building new airport terminals, reconstructing the Northeast Corridor rail line, even financing a clean energy power plant on the Hudson River. Ostensibly, undoing Obama’s flood standards will be a way to speed up these projects. (Trump did not say that was the specific reason, nor did a reporter ask.)

But speedily built projects are worthless if they become damaged beyond repair in just a few years. They likely will, as flooding is the country’s most common natural disaster. It’s also the costliest: FEMA estimates that flood damage costs Americans $260 billion from 1980 to 2013. Federal flood insurance claims are also through the roof, averaging $1.9 billion annually from 2006 to 2015. And as we work to fix these projects that weren’t protected from flooding, the working class people who Trump promised to protect will suffer most from the loss of their rail line, bridge, fire station, housing project, or hospital. “This is climate science denial at its most dangerous, as Trump is putting vulnerable communities, federal employees, and families at risk by throwing out any guarantee that our infrastructure will be safe,” Sierra Club Executive Director Michael Brune said in a statement.

What makes all this so confounding is that Trump clearly recognizes the threat of sea-level rise. Last year, he applied for a permit to build a sea wall to prevent erosion at his oceanfront golf resort in Ireland. Trump later withdrew that permit — because of opposition from locals, not because the threat disappeared. As Politico reported, the application included an environmental impact statement that said, “If the predictions of an increase in sea-level rise as a result of global warming prove correct, however, it is likely that there will be a corresponding increase in coastal erosion rates … around much of the coastline of Ireland. In our view, it could reasonably be expected that the rate of sea-level rise might become twice of that presently occurring …”

It’s not just Trump’s foreign properties that are at risk from rising seas. “In 30 years, the grounds of Mar-a-Lago could be under at least a foot of water for 210 days a year because of tidal flooding along the intracoastal water way, with the water rising past some of the cottages and bungalows,” the Guardian reported last year, citing an analysis by Coastal Risk Consulting. And The Hill reported that “Trump’s oceanfront condos in Miami and his Doral golf course would also be threatened, according to projections by the National Oceanic and Atmospheric Administration and the South Florida Regional Climate Change Compact.”

And yet, Trump has made clear that he thinks climate change is a “hoax.” That’s why Democratic Representative Earl Blumenauer in June introduced a bill, “The Prohibiting Aid for Recipients Ignoring Science (PARIS) Act,” to block the president’s properties from federally subsidized flood insurance. “The American people should not be responsible for bailing out leaders who ignore science to gain political points, while subjecting the United States — and the rest of the world — to the catastrophic effects of climate change,” the congressman said. “Trump may choose to reject science, but he can’t ignore the impacts — especially as they happen in his own backyard.”

The bill will never become law, but Blumenauer is right about the president’s hypocrisy. When Trump visited Louisiana last year, he said, “I came here to help.” But now he’s showing little concern not only for future flood victims, but the taxpayers who will have to cover the damage to public infrastructure wrought by rising seas.