Vodka made from captured carbon dioxide? That's the spirit. 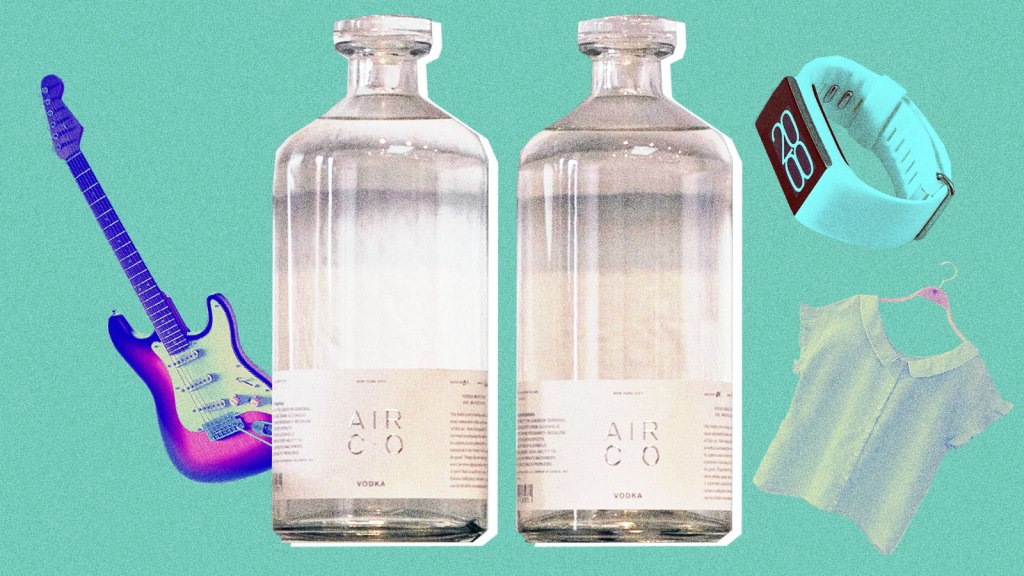 Vodka made from captured carbon dioxide? That’s the spirit.

A 20-foot tower of tubes and wires rises inside a narrow building in Brooklyn. Crystal-clear liquid flows from the array into big plastic drums, which chemists wheel toward a tall metal still. They pour in the product and, when it’s ready a few hours later, take a sip. It’s vodka, made without any potatoes or grains, and the key ingredients are hydrogen and captured carbon dioxide.

Air Company’s distillery sits in a quiet industrial stretch of the neighborhood of Bushwick, across from a ramen noodle factory and shuttered storefronts. The startup began selling its spirits this month to bars and restaurants around New York City, after years of development in the lab. Its CO2 supply comes primarily from beverage manufacturing plants, which produce waste gases during fermentation. Instead of escaping into the air, the molecules now wind up in vodka bottles.

Vodka is just the start, said Gregory Constantine, the company’s CEO. The team hopes that selling a consumer product will allow it to scale up its pilot system for making alcohol, so that the company can expand into alternative fuels, plastic-making chemicals, or other markets. Standing beside a vat of booze, Constantine said the new distillery shows “that this technology exists and that it’s viable.”

Hundreds of companies and research groups worldwide are working to capture, reuse, and sequester heat-trapping gases as emissions soar. Last year, global carbon emissions hit an all-time high of 40.9 billion tons (37.1 billion metric tons), largely a result of burning oil, coal, and natural gas. But all that carbon doesn’t have to wind up in the atmosphere. Much of it could be captured at the source and recycled — or possibly sucked directly from the air.

“Products that can turn carbon from a liability to an asset can play a really critical role in meeting our climate goals,” said Giana Amador, managing director of Carbon180, a nonprofit based in Oakland, California.

The potential worldwide market for waste-CO2 products could be $5.9 trillion a year, according to Carbon180. Cement, plastics, and transportation fuels make up most of that potential market, though consumer goods are expected to represent a tiny slice: less than 1 percent.

People can already buy watches, pens, and incense holders made from carbon-absorbing solid materials. Two startups, Carbon Upcycling Technologies and Sky Baron, recently launched a line of such products. Jewelry companies sell lab-grown diamonds made by subjecting carbon to high pressure and chemical vapors; the result are rocks that are just as sparkly but considerably cheaper than natural diamonds.

Such products can serve as “stepping stones” toward bigger markets, Amador said. “They provide a really important revenue stream for budding startups.”

Last year, Air Company moved into its Brooklyn facility, which had previously been a dumpy, unlicensed nightclub. The reactor tower took 18 months to build and underwent tests in Ontario, Canada, before a crane lowered it into the distillery. Their technology combines CO2 and hydrogen using a metal catalyst to produce ethanol (ethyl alcohol), a chemical building block.

Scientists are developing similar approaches at Oak Ridge National Laboratory and Stanford University, though they’re focusing on making biofuels and battery-like systems. Another company, LanzaTech, is making 10 million gallons of ethanol using a different method: Microbes that feed on carbon-rich waste gases from steel mills in China. The resulting product has been blended into jet fuel and spun into synthetic fibers.

For any developer in this growing industry, creating and scaling technologies isn’t the only challenge. Companies must also figure out how to do so without producing their own sizable carbon footprints. Many factors determine a product’s “cradle-to-grave” emissions, and not everybody takes those fully into account, said Jennifer Dunn, associate director of the Center for Engineering Sustainability and Resilience at Northwestern University.

For instance, carbon that’s captured from smokestacks is typically separated and purified before being used for other purposes. That process can consume large amounts of electricity and water, raising costs and emissions, particularly if that electricity comes from coal-fired power plants. “Carbon doesn’t necessarily come free, in terms of its environmental burden,” Dunn said.

A product’s lifespan also makes a difference. Plastic polymers used for say, packaging and building materials, can lock away CO2 for longer than biofuels, which immediately return CO2 to the air once they’re burned in engines. But short-lived products can still benefit the environment if they displace products made from fossil fuels. Whether they will remains an open question for researchers.

LanzaTech and Air Company both say they audit their emissions to ensure their products are cleaner than what they’re aiming to replace.

“We’ve tried to take all the pieces of traditional alcohol production that put CO2 into the atmosphere and replace it with renewable power,” said Stafford Sheehan, Air Company’s chief technology officer. The electrochemist developed the ethanol-making technology and had been using it to make anti-corrosion materials before teaming up with Constantine.

Air Company’s supplier liquefies the CO2 at a facility powered partly by hydroelectric plants in Niagara Falls and trucks it to Brooklyn. Air Company makes its own hydrogen on site from an electrolyzer, a big gray box that splits water into hydrogen using electricity. To distill ethanol into vodka, they opted for an electric-steam boiler instead of the natural gas boilers that distilleries often use.

A small solar array sits on the building’s Brooklyn rooftop, but most of its electricity is drawn from the grid. (The company subscribes to CleanChoice Energy to support wind and solar projects and offset its ample electricity consumption.) Sheehan estimated it can take up to 36 kilowatt-hours of electricity to produce one liter of vodka — about as much as the average U.S. home uses in one day.

That could fall to 14 kilowatt-hours per liter as they develop bigger, more efficient systems, Sheehan said. Air Company is working with a Canadian partner, Zeton, to build an ethanol reactor in Ontario that’s roughly 10 times bigger than the Brooklyn one, with help from the provincial government.

Sipping “carbon negative” vodka will hardly reduce a drinker’s contribution to global warming. But transforming everyday products can still have a positive effect by raising awareness of the broader industry among consumers and potential investors, Dunn said.

“In general, if we can use our waste gases to make things that people enjoy, that could spur other companies to do something like that, or start consumers wanting more of it,” she said.