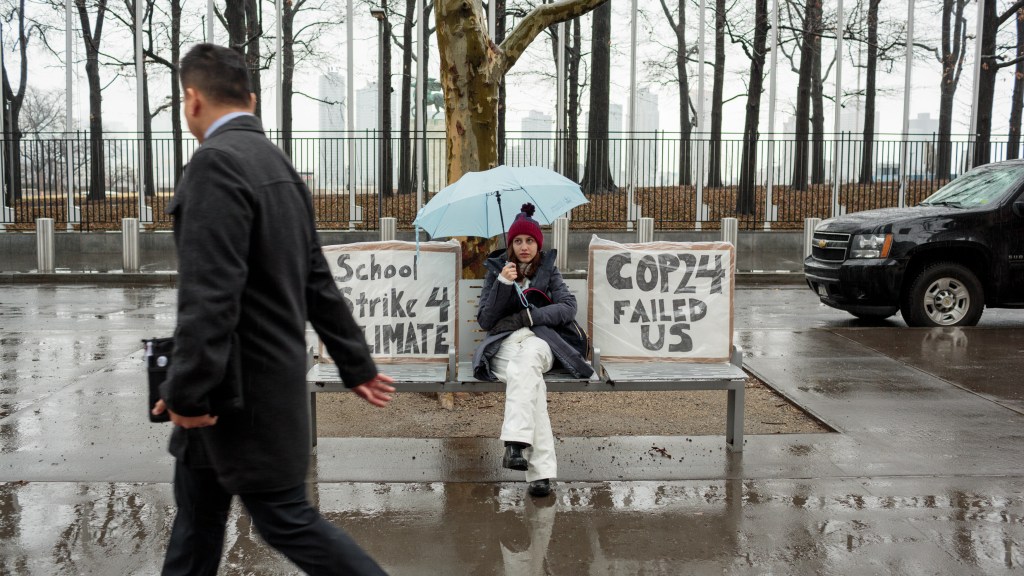 Alexandria Villasenor skips school on Friday morning to strike in front of the U.N. Sarah Blesener for the Washington Post via Getty Images
Climate Desk

Alexandria Villasenor looks a slightly incongruous figure to stage a lengthy protest over the perils of catastrophic global warming. The 13-year-old, wrapped in a coat and a woolen hat, has spent every Friday since December seated on a frigid bench outside the United Nations headquarters in New York City with signs warning of climate change’s dire consequences.

Most passersby, probably hardened to confronting New York street scenes, scurry past, eyes diverted downwards. But some mutter words of support, while the odd passing driver rolls down their window to offer a thumbs up.

There is media interest, too. On a recent Friday protest stint, a microphone was being pinned to a shivering Villasenor by an NBC crew. “I stayed out there for four hours and I lost circulation in my toes for the first time,” she said afterwards.

Cold weather in winter is routinely used by President Donald Trump to disparage climate science — in January, the president tweeted: “Wouldn’t be bad to have a little of that good old fashioned Global Warming right now!” — but Villasenor has experienced enough in her nascent years to grasp the scale of the threat.

Her concern has driven her to help organize the first nationwide strikes by U.S. school students over climate change, on March 15. More than 100,000 young people are expected to skip school on the day and attend rallies demanding radical cuts in greenhouse gas emissions.

Villasenor was born and raised in Davis, California, in the teeth of the state’s fiercest drought in at least 1,200 years. She recalls seeing the dead and dying fish on the shores of nearby Folsom Lake as it dried up. In November, Davis was shrouded in a pall of smoke from record wildfires that obliterated the town of Paradise, 100 miles to the north.

“I have asthma so it was a very scary experience for me, I couldn’t leave my house at all,” Villasenor said. “Just walking to the car would make my eyes sting. We rolled up towels and put them under the windows. A lot of my friends were going out in the smog and I was texting them to see if they were OK, as I’m the mom of the group.”

Villasenor’s family subsequently moved to New York, the switch hastened by concerns over her health due to the smoke. The young student then swiftly became an activist after reading how warming temperatures are making the western U.S. far more prone to the sort of huge wildfires that menaced her hometown.

After bouncing around a few youth-led climate groups, Villasenor struck up a rapport with fellow students Isra Hirsi, in Minnesota, and Haven Coleman, from Colorado. The trio set about creating Youth Climate Strike U.S., the first major American response to the recent mass school walkouts by European students frustrated by adults’ sluggish response to climate change.

“My generation knows that climate change will be the biggest problem we’ll have to face,” Villasenor said. “It’s upsetting that my generation has to push these leaders to take action. We aren’t going to stop striking until some more laws are passed.”

The American students preparing to join a global wave of school strikes on March 15 have been spurred by the actions of Greta Thunberg, a 15-year-old Swede who started taking every Friday off school to call for more rapid action by her country’s leaders.

In a gently excoriating speech, Thunberg told governments at U.N. climate talks in December that “You say you love your children above all else, and yet you are stealing their future in front of their very eyes.”

Those under 20 years old have never known a world where the climate isn’t rapidly heating, ensuring that their lifetimes will be spent in average temperatures never before experienced by humans.

For someone getting their first taste of politics it can be hard to digest that precious little has been done to avert a future of disastrous droughts, floods, and storms since James Hansen, then of NASA, delivered his landmark warning on climate change to Congress 30 years ago.

“It was confusing at first because I expected politicians to be on to this, given what the scientists were saying,” said Chelsea Li, a 17-year-old at Nathan Hale high school in Seattle and local strike organizer. “But I didn’t see any action. We are going to have to do the things the adults are too afraid to do because it’s our futures we are fighting for.”

The American strikers’ challenge appears particularly steep. It’s one thing protesting in the U.K., where carbon dioxide emissions have plummeted to levels not seen since Queen Victoria’s reign, or Germany, where the government has pledged to phase out all coal use within 20 years.

It’s quite another to appeal to Trump, who has called climate science an elaborate Chinese hoax and has overseen the dismantling of Obama-era efforts to reduce emissions from coal plants and vehicles.

Youth-led groups like the Sunrise Movement and Zero Hour have seized the initiative from traditional green groups but have been met with the same unyielding political establishment. In a videoed exchange since parodied on Saturday Night Live, Senator Dianne Feinstein, the veteran Democrat, clasped her hands behind her back and patiently told a group of middle and high schoolers that they weren’t yet able to vote for her and their demands on climate were unrealistic.

There was no way to pay for the Green New Deal, a plan to decarbonize the economy championed by progressives, according to Feinstein. “I’ve been doing this for 30 years,” she said, an assurance alluding as much to political inertia as political experience.

“I think she was trying to dismiss me,” said Isha Clarke, a 16-year-old from Oakland who had confronted Feinstein. “I think she was making excuses for why she didn’t have to listen to us. For older people there’s no urgency, they are used to the system and compromising.”

Clarke said the interaction with Feinstein was disappointing but the backlash was “amazing,” with the California senator releasing and then dropping her own climate plan after it was savaged for being too weak. Feinstein also offered Clarke an internship, which she has yet to accept.

“It’s sort of tricky because you have to play the game to change it but I don’t want it to cover up everything that happened,” Clarke said. “Most young people are very aware of climate change, a lot of them are super passionate about it but they don’t have the resources to make their voices heard. They don’t realize they have the power to create change.”

That voice will be heard on March 15 when students forgo their classes in order to make a plea that they hope won’t be dismissed as indulgent truancy. Parents and teachers may have to brace themselves for future walkouts.

“My parents are very supportive, they understand my beliefs,” said Villasenor, as she repositioned her placards for the cameras. “If we’re not going to have a future, then school won’t matter anymore.”