Big Coal is placing its final bets in these U.S. communities. - Grist 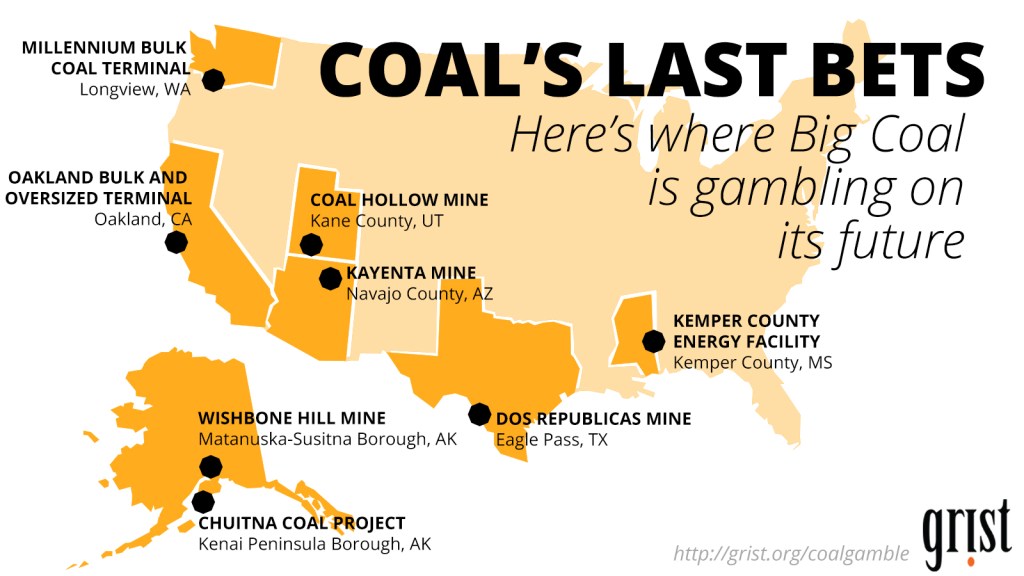 Big Coal is placing its final bets in these U.S. communities.

Despite the political and market forces arrayed against it, the coal industry is still clinging to life, pushing forward massive new mines, export terminals, railway lines, and power plants.

In a special report this week, Grist examines the struggling industry’s long game, including one company’s efforts to build a $700 million project on the Chuitna River in south-central Alaska. Here are seven other places where the American coal industry is trying to resuscitate itself at the expense of, well, the rest of us:

Even after major backer Arch Coal declared bankruptcy and dropped its stake in 2016, the $640 million export terminal won’t die.

The project had cleared most of its regulatory hurdles when members of the the nearby Chickaloon tribe filed a lawsuit.

A company with a history of cleanup violations wants an expansion that would double the mine’s annual output.

Located on reservation lands on Arizona’s Black Mesa, the Peabody-owned mine opened in 1973 but faces new opposition.

Opened for business in November 2015, the mine on the U.S.-Mexico border threatens archaeological sites and burial grounds.

Mississippi’s $6.7 billion “clean coal” plant has been criticized as excessively expensive and too carbon-heavy, but officials say it could be operational by October.

Grist staff
Sweden plans to give tax breaks for fixing stuff instead of throwing it away.
Donald Trump might appoint an oil executive and anti-animal rights activist to head the Interior Department.