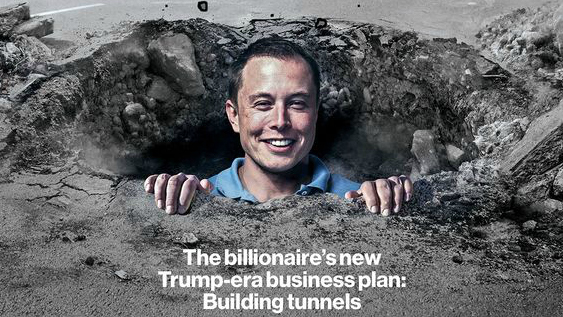 Elon Musk has started digging a tunnel under Los Angeles.

In December, when Musk got stuck in traffic, instead of leaning on the horn or flipping off the other drivers, he decided to build a new transportation system. An hour later, Max Chafkin writes in Bloomberg Businessweek, “the project had a name and a marketing platform. ‘It shall be called The Boring Company,’” Musk wrote.

Traffic is driving me nuts. Am going to build a tunnel boring machine and just start digging…

Musk told employees to grab some heavy machinery and they began digging a hole in the SpaceX parking lot. He bought one of those machines that bores out tunnels and lays down concrete walls as it goes. It’s named Nannie.

Musk is the grown-up version of the kid who decides to dig to China: He doesn’t pause to plan or ask what’s possible, he just grabs a stick and starts shoveling. Maybe that’s the approach we need. As Chafkin points out, “Tunnel technology is older than rockets, and boring speeds are pretty much what they were 50 years ago.” And Bent Flyvbjerg, an academic who studies why big projects cost so much, says that the tunneling industry is ripe for someone with new ideas to shake things up.

Musk is a technical genius. But the things that make tunnels expensive tend to be political — they have to do with endless hearings before local government councils and concessions to satisfy concerned neighbors and politicians. For that stultifying process, at least, Musk’s new company is aptly named. If Musk figures out how disrupt local land-use politics, it would mean he’s smarter than anyone thinks.