Europe is going all in for batteries. - Grist

Europe is going all in for batteries.

Daimler AG, the company behind Mercedes-Benz, just broke ground on a $543 million lithium-ion battery plant in Germany, Bloomberg reports. Consider it a response to Tesla’s $5 billion gigafactory under construction in Nevada, as car makers and utilities drive demand for more powerful and less expensive batteries.

The German plant is the first of many such factories planned in Europe, including a 4 billion-euro ($4.5 billion) battery plant slated for Sweden by 2023. With all this investment in batteries, prices could fall by 43 percent, estimates Bloomberg’s energy research unit — enough to make electric cars cheaper than their fossil-fueled counterparts by 2030. 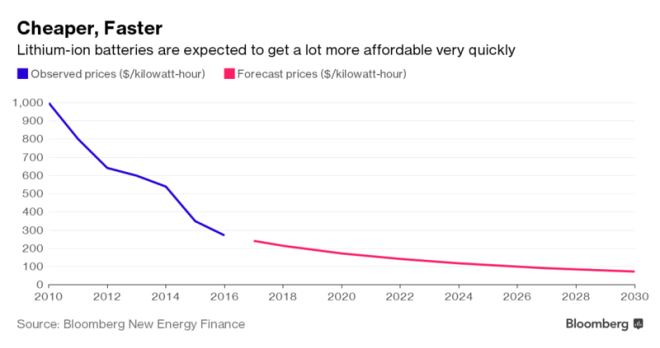 Cheap, reliable batteries are the key to affordable electric cars and greener energy systems, as we’ve reported. Finland and Italy are also testing large-scale battery storage systems to use with solar and wind projects. Good storage can turn an erratic and unpredictable power supply into a stable and responsive one.

And of course, growth of EVs and utility-scale solar are interconnected, too. As more plug-in vehicles draw their energy from an increasingly renewable-powered grid, more storage will be necessary to meet that demand. It just keeps coming back to batteries.

Amelia Urry
Coal impacts could push 122 million people into extreme poverty by 2030.
Meet the fixer: This organizer is uniting millennials.