Even with climate pledges, the world's on track to warm by more than 2 degrees. - Grist

Even with climate pledges, the world’s on track to warm by more than 2 degrees.

Countries that have put forward plans for the Paris Agreement need to take even more aggressive action this century, according to a United Nations Environment Program (UNEP) report, released one day before the agreement takes effect. Current pledges set the temperature to rise by 2.9 to 3.4 degrees Celsius, well above Paris’ goal to keep warming below 2 degrees.

Both the Paris Agreement and the recent amendment to reduce hydroflurocarbons (another potent greenhouse gas) “show strong commitment,” said head of U.N. Environment Erik Solheim. “But it’s still not good enough if we are to stand a chance of avoiding serious climate change.”

You can see where the Paris pledges fall short in this graph. We’re certainly better off than the business-as-usual baseline of emissions (that steep black line). But if you add up all countries’ individual pledges (the green and brown lines labeled INDC), we’re still far from the pathway we want (blue or purple). 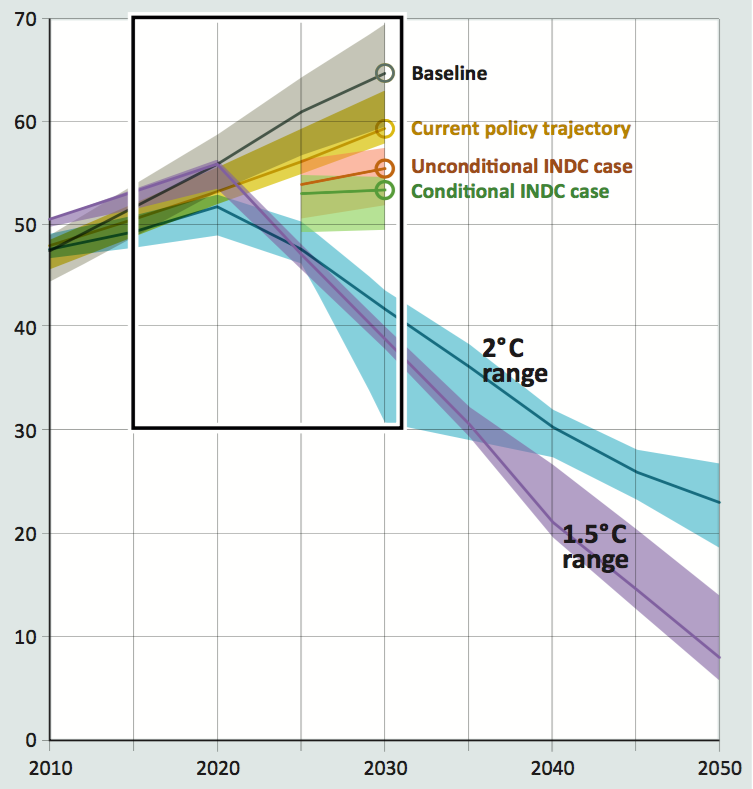 To get back on track, we need to lose another 12 to 14 gigatons of CO2 by 2030. How do we do that? The report highlights citywide and regional initiatives, and improved energy efficiency, to make even deeper cuts in emissions this decade.

Amy McDermott
Is Iceland over?
For every ton of CO2 pumped into the atmosphere, we lose 32 square feet of Arctic sea ice.