For every ton of CO2 pumped into the atmosphere, we lose 32 square feet of Arctic sea ice. - Grist 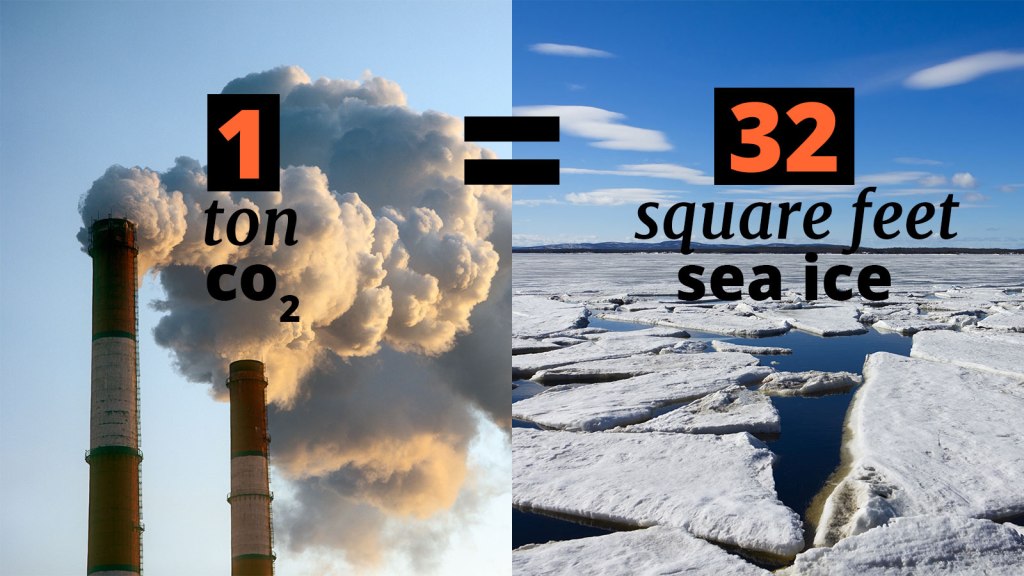 For every ton of CO2 pumped into the atmosphere, we lose 32 square feet of Arctic sea ice.

This is according to a new study in Science. That’s a sizable slab: Rose and Jack could have floated on a ’burg that big with room to spare (and Titanic would still end with a frozen hunk!).

If you live in the U.S., you are accountable for about 17 tons of CO2 a year. That’s roughly 1.4 tons a month, or one and a half Rose-and-Jack rafts every 30 days. Multiply that by 300 million people in the States, plus Europe, plus Australia, plus … you get the picture. In the last 30 years, we’ve lost enough ice to cover Texas twice over.

Thirty-two square feet per ton is a scary, but useful, statistic. It nails a number to our individual actions, the consequences of which might otherwise seem abstract, says Dirk Notz of the Max Planck Institute for Meteorology in Hamburg, Germany.

For example, Notz offers, a round trip flight from New York to London knocks out 32 square feet of summer sea ice “for every single seat” — something to factor in when you’re calculating the price of a ticket home.

Amy McDermott
Even with climate pledges, the world’s on track to warm by more than 2 degrees.
Can California get anyone other than rich people to buy electric vehicles?