A small horde of reporters has descended upon the city to pile into the backseats of autonomous Ford Fusions — escorted around town by Uber employees, of course.

And the national media is pretty hype on the colossally unprofitable startup’s rollout of its self-driving cars. NPR, for example, noted that “Uber is like the Wright brothers testing the world’s first airplane on the coast of North Carolina.”

But as a Pittsburgh native, I only really care about what my ilk have to say about anything that happens there. On that note, here’s WTAE reporter Beau Berman’s autonomous Uber experience:

We also spoke to a local, aka My Buddy Chris: 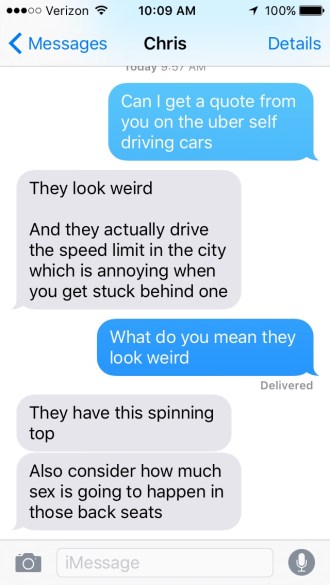 Anyway, that’s all you need to know about Uber’s self-driving cars in Pittsburgh today.