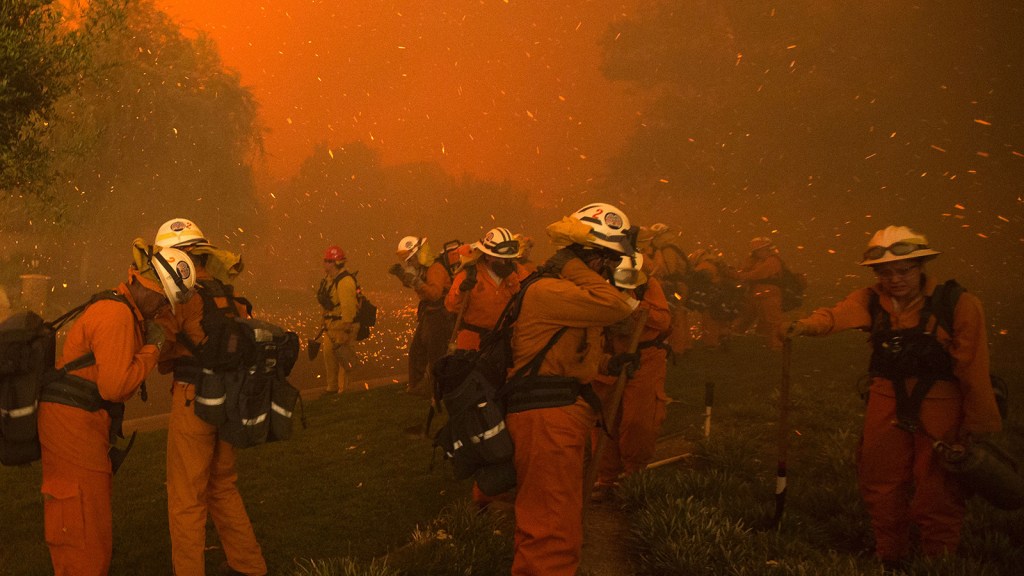 Inmates are risking their lives to fight California’s raging fires.

As wildfires tear through the greater Los Angeles area, destroying hundreds of homes, officials have warned nearly 200,000 people to evacuate.

Thousands of firefighters have arrived on the scene — many of them inmates, who make up about a third of the state’s wildfire-fighting force. Since the 1940s, California has relied on inmates to combat the flames by digging containment lines and clearing away brush. In return for this difficult and dangerous work — which has been compared to slave-era labor conditions — inmates get credit toward early parole and $2 per day in camp plus $1 per hour for their time on the fire line.

Roughly 250 women inmates serve on California’s firefighting force, risking their lives to get out of prison faster.

As massive fires rip through CA, I'm thinking of all the women putting their lives on the line to help fight them, for about $2 a day, just so they can get out of prison early and be with their children. Not the "sexy" story corrections wanted out there. https://t.co/9WijpdhFCx

“I’ve seen women come back with broken ankles and broken arms, burns, or just suffering from exhaustion, you know, the psychological stress that people go through trying to just pass the requirements,” Romarilyn Ralston, a former firefighter trainer, told PBS.

Kate Yoder
A House Energy and Commerce subcommittee finally got to grill Scott Pruitt on Thursday.
People of color and low-income residents still haven’t gotten the help they need after Hurricane Harvey.