Iowa’s planning the largest wind project yet, but everything’s still bigger in Texas.

Despite its large oil and gas industry, Texas has added more wind capacity than any other state. But Iowa is trying to steal some of its thunder.

The Wind XI project, which the Iowa Utilities Board approved on Friday, will add up to 2,000 MW of wind generation, or enough to power 520,000 homes. As the biggest wind project in U.S. history, it will include 1,000 wind turbines that should be up and running by the end of 2020. By then, 85 percent of Iowa homes and business will run on clean energy.

Until then, Texas is still the king of renewable power. 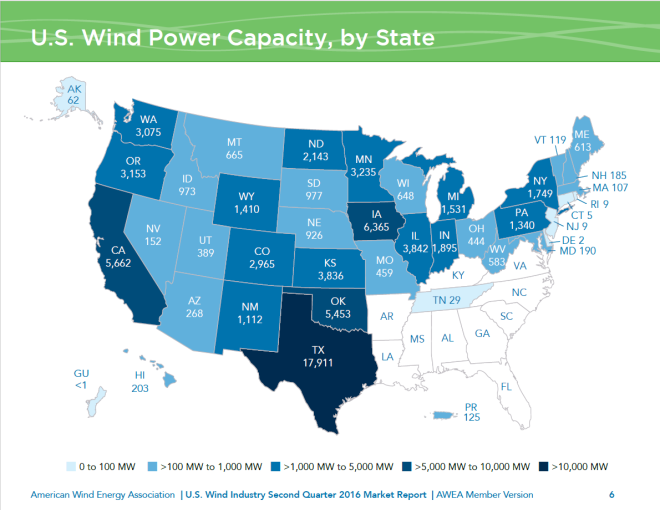 As the Wall Street Journal reports, 16 percent of all electricity in the Lone Star State was generated by wind in April. And now, Texas is expecting a surge in solar as production costs continue to fall. Already, the cost of solar has dropped 48 percent in just the past six years.

While Texas (or, for that matter, Iowa) isn’t exactly known for environmentalist leanings, a poll conducted by the nonpartisan Texas Clean Energy Coalition found that 85 percent of respondents are in favor of expanding renewable energy sources — and they are even willing to pay a bit more to go green.

Katie Herzog
Check out this new thing we made.
Solar is nearly 10 percent cheaper than it was a year ago.