Most desalination plants — factories that take the salt out of ocean water — look like this: 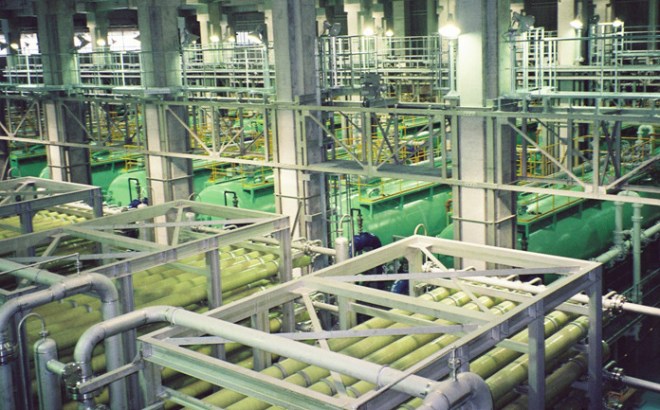 But the Land Art Generator Initiative, a competition to design new energy infrastructure that can do double duty as public art, says a desalination plant can look like this instead:

But the shiny surface on this hypothetical 2,000-foot-long pipe is actually solar panels, which would power the seawater-to-freshwater process.

The interior of the pipe would be an enormous public pool that would help disperse the extra-salty brine left over from the desalination process back into the ocean.

Khalili Engineers, the team that created the design, told Fast Co.Exist that the pipe would be able to supply a billion gallons a year — about half of Santa Monica’s freshwater needs. They’re building a prototype to prove it — which is good, because that number sounds ambitious.

In the meantime, this conceptual work is a perfect hybrid of current trends in art, technology, climate preparedness, and public spaces for our hotter, more crowded cities. Expect to see more blinged-out designs like this in the future.

Heather Smith
Fox News acknowledged climate change, then promptly took it back.
Surprise! Climate change did not come up at this week’s presidential forum on national security.