Most Democrats and Republicans agree: Arctic drilling is a bad idea. - Grist

Most Democrats and Republicans agree: Arctic drilling is a bad idea.

The sweeping Republican tax bill the Senate passed over the weekend (which is supposed to deal with, y’know, taxes) contains a provision allowing oil drilling in the Arctic National Wildlife Refuge — the largest national wildlife refuge in the United States.

A national survey published Monday by Yale University’s Program on Climate Change Communication found that 70 percent of voters oppose drilling in the refuge. Only 18 percent of Republican voters “strongly support” the policy. 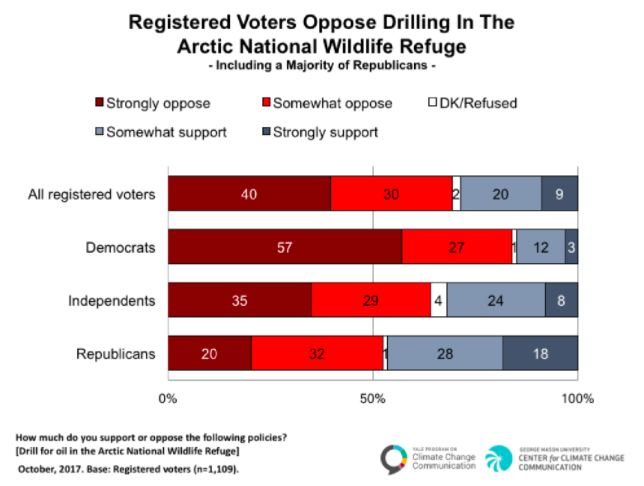 Drilling measures in federally protected areas typically require bipartisan support and 60 Senate votes, which is why pro-drilling members of Congress have previously had trouble enacting Arctic drilling legislation. But packaged as an amendment to the tax bill, the drilling provision sailed through Congress without undergoing the normal process.

Conservation groups aren’t happy about the fossil fuel-friendly provision, and they’re backed by dozens of Arctic wildlife scientists who say oil production is at odds with the refuge’s role as a sanctuary for wildlife.