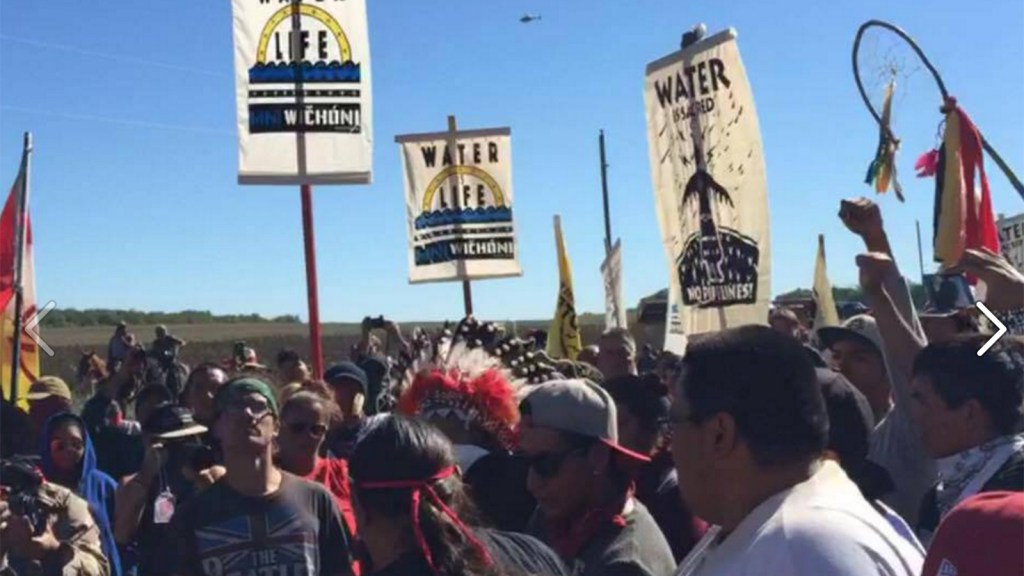 About 150 people gathered for a prayer ceremony near the Dakota Access Pipeline construction site in North Dakota on Wednesday. As they started to leave, Morton Country Sheriff’s deputies in armored vehicles blocked their way as police helicopters hovered overhead.

Valley News Live, a local television news station, reported that the 21 were arrested for “various crimes including resisting arrest, criminal trespass on private property, and possession of stolen property.” Photos posted online showed deputies in riot gear carrying assault rifles and one deputy loading a shotgun at the site.

Responding to questions from Grist about the deputy with a shotgun*, Kyle Kirchmeier, Morton County’s sheriff, said the situation “presented an imminent threat.”

“The officer responded with an appropriate show of force by raising his weapon containing less-lethal ammunition,” Kirchmeier said.

In a video posted to Facebook by Thomas H. Joseph II, a community organizer and member of the Hoopa Valley Tribe, there are police in armored vehicles and what appears to be a Long Range Acoustic Device, or LRAD, which weaponizes sound. LRADs are used by militaries and police to control crowds; they emit a painful, high-pitched noise that can cause severe nausea, destroy eardrums, and incapacitate people.

*This story has been updated to include a response from Kirchmeier.

Aura Bogado
Lawmakers finally agreed on Flint aid, 363 days after residents were told to stop drinking their water.
Here’s another source of greenhouse gases you should be worrying about: hydropower.