Pulling out of the Paris Agreement is a bad idea. Even Bill O'Reilly knows that. - Grist

What A Time To Be Alive

Pulling out of the Paris Agreement is a bad idea. Even Bill O’Reilly knows that.

Many have agreed that President-elect Donald Trump has some questionable ideas when it comes to climate policy. Today, we get to add anthropomorphized gym sock O’Reilly and known cup goblin Starbucks to that list!

On Wednesday’s episode of The O’Reilly Factor, he advised Trump on a number of items to consider as he prepares to take office. On this list:

“Finally, President-Elect Trump should accept the Paris treaty on climate to buy some goodwill overseas. It doesn’t really amount to much anyway, let it go.”

Well, the thing is, it does actually amount to a lot.

Here’s a confusing screenshot, because this action item appears under the heading “What President Obama Failed to Do,” when President Obama did, in fact, succeed in accepting the Paris Agreement. 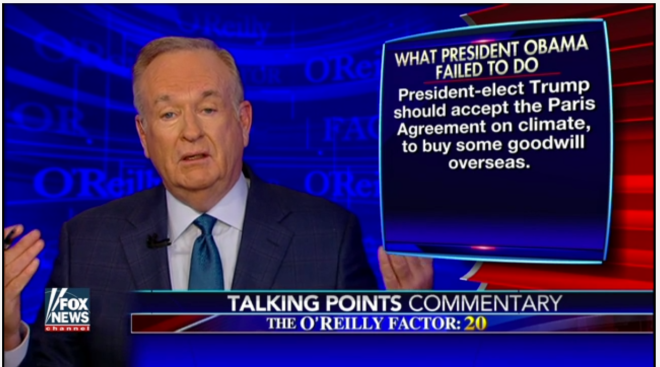 On Thursday morning, a coalition of 365 major companies and investors submitted a plea to Trump to please, come on, just support the goddamn Paris Agreement, because to do otherwise would be a disastrous blow to the United States’ economic competitiveness. The list includes Starbucks (the nerve!!!!), eBay, Kellogg, and Virgin.

Eve Andrews
If this Republican donor loves clean energy, then why did he back fossil-fuel friendly candidates?
A woman who fought predatory oil and gas leasing on Native lands got the Presidential Medal of Honor.