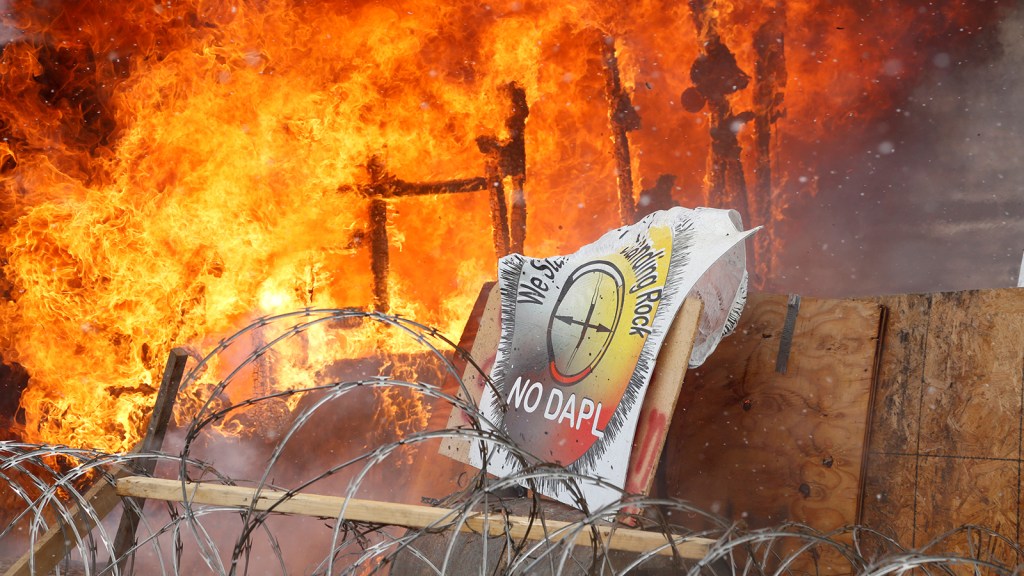 About 150 people voluntarily left the last occupied resistance camp by Wednesday at 2:00 p.m., the state-issued deadline to clear camps built to oppose the Dakota Access Pipeline. The remaining water protectors joined members of the Standing Rock Sioux Tribe in setting fire to tents according to tribal tradition — one last blaze of defiance against the pipeline.

Police likely arrested around 50 people, and around 25 to 50 water protectors still remained in the evacuation zone after the 2:00 p.m. deadline. North Dakota law enforcement entered the camps again this morning to clear out anyone who still remained. Ruth Hopkins, a journalist with Indian Country Media Network, reported law enforcement pointing rifles at people and knifing tipis.

On Feb. 20, the Standing Rock Sioux Tribe asked all water protectors to peacefully vacate the camps by yesterday, maintaining that the battle is now in court and on the streets. On Feb. 15, the Standing Rock and Cheyenne River Sioux tribes asked a court to reverse a final easement that would allow the disputed portion of the pipeline to be built. And on March 10, the tribes will rally for the Rise With Standing Rock Native Nations March on Washington.

When the 150 water protectors left camp on Wednesday, they marched out holding an American flag hung upside down.

Sabrina Imbler
Exxon just decided to keep a big chunk of its tar sands in the ground.
Climate activists are rooting for Keith Ellison to head up the Democratic National Committee.