The season premiere of Madam Secretary dealt with climate change, and some people didn’t like that. - Grist 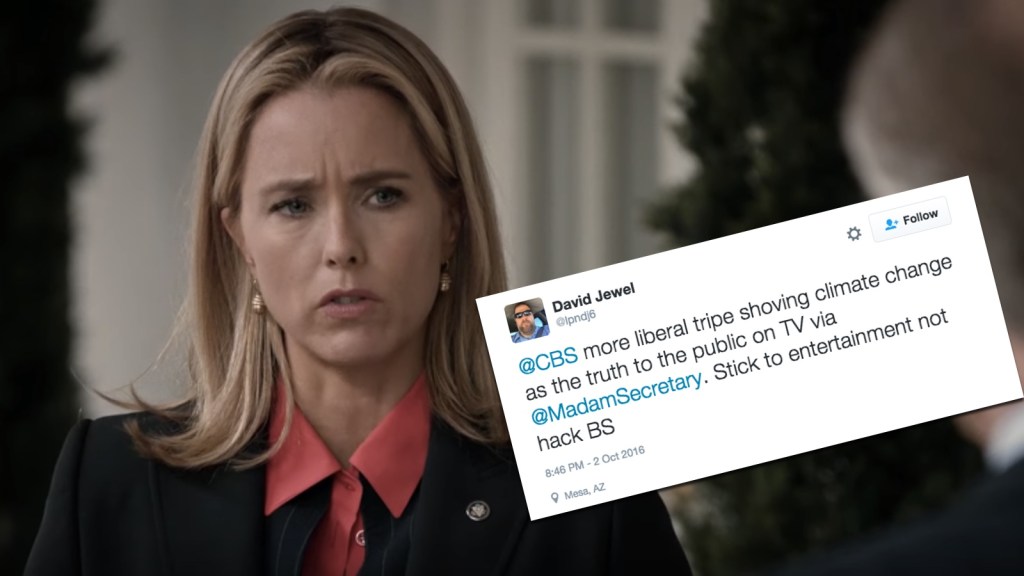 The season premiere of Madam Secretary dealt with climate change, and some people didn’t like that.

In the premiere of the show’s third season on CBS, President Conrad Dalton (played by Keith Carradine) breaks party ties by embracing climate science and promising to prepare military bases around the world for superstorms. He then promptly loses his party’s primary — womp, womp — but now might run on an independent ticket.

And true to form, those who take issue with the fact of human-caused climate change took to the devil’s platform to express as much rage as if this had happened in! real! life!

See where @CBS @MadamSecretary is going to push the phony Liberal Global Warming/Climate Change agenda this Season. It's cyclical Folks.

So much for watching Madam Secretary this year!First episode whining about climate change!Guess they're in bed with Obama!

Just last week, a spat between Clinton and Trump about climate change in the first presidential debate spurred angry headlines — and, of course, tweets.

Will we continue to yell about climate change, both in fiction and real life, until we die? Do we exist in a hologram projected from the bowels of Twitter dot com? Only time will tell.

Cody Permenter
For the first time, bees have been added to the U.S. endangered species list.
Police in India kill four people protesting state-run coal mine.