Native Americans marched on Washington for their rights — civil, treaty, and human. - Grist 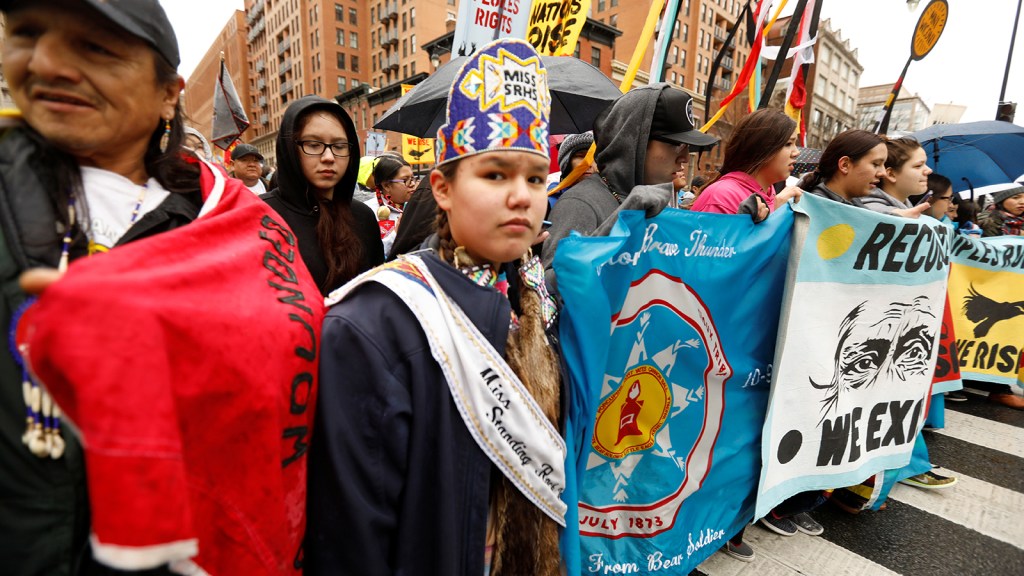 Native Americans marched on Washington for their rights — civil, treaty, and human.

Led in part by the Standing Rock Sioux Tribe, the Native Nations Rise march was the latest mobilization in the years-long battle against the Dakota Access Pipeline.

Braving a slurry of wet snow, thousands of indigenous people and their allies marched from Union Station to the White House. They made one notable detour to the Trump International Hotel, where they erected a tipi and Native women led a ceremonial round dance.

The march was the culmination of four days of demonstration in the nation’s capital, where tribes have gathered to pray, workshop, and rally for indigenous rights in America. The Sioux say their treaty rights were violated when the U.S. government neglected to consult with them while considering whether to approve the pipeline, a major argument in the tribe’s current lawsuit against it.

Somewhere along the route, 16-year-old indigenous climate activist, hip-hop activist, and all-around rock star Xiuhtezcatl Martinez performed songs he wrote about the #NoDAPL fight. In his own words: “But you will not break me / Anything less than grace will not shake me, break free / I call my drop to the frontline / Kill the black snake, bring an end to the pipelines.”

Happening now: #NativeNationsRise march through DC. The rain is coming down with a mix of snow. The earth hears these drums! pic.twitter.com/vpjRioi7zh

Sabrina Imbler
There’s a lot more oil to keep in the ground all of a sudden.
Police want to search a #NoDAPL group’s Facebook page.