Trump’s environmental executive order is everything we feared. - Grist

as the world burns 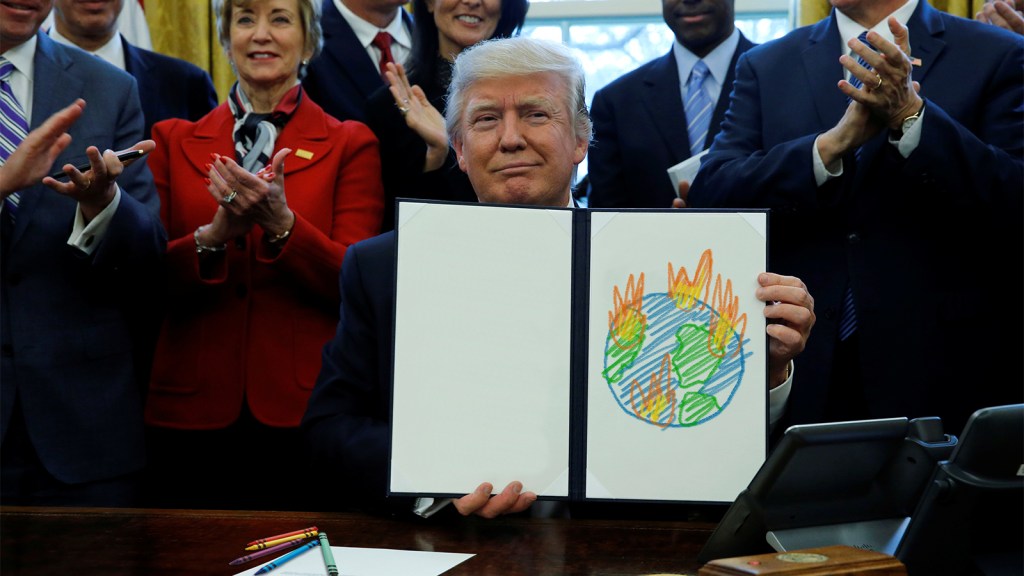 Trump’s environmental executive order is everything we feared.

A senior White House official confirmed that President Trump will start rolling back key Obama-era climate policies on Tuesday. The executive order is aimed at sweeping away the Clean Power Plan, methane regulations, mining restrictions on federal land, and, well, you name it.

The White House will direct government agencies to root out “all rules, all policies, and guidance documents that serve as obstacles or impediments to domestic energy production,” according to the official who spoke on background during a conference call with reporters Monday evening.

“Energy independence,” said the official. “That’s the goal.” (For the record, the United States is already pretty independent, importing about 11 percent of its energy.)

The official also told reporters that the administration was still debating whether to remain party to the Paris climate agreement.

As details started to leak out after the conference call, environmental organizations were up in arms. The World Resources Institute called the impending order a “sledgehammer to U.S. climate action.”

When a reporter asked about green groups threatening to sue, the administration seemed unfazed. “I’m sure they’ll disagree, but what’s your point?” the official said. “When it comes to dealing with climate change, we want to take our own course and do it in our own form and fashion.”

If there’s a silver lining here (and hey, it’s thin), it’s that the administration admits there’s such a thing as “dealing with climate change.”

Emma Foehringer Merchant
That long-promised executive order rolling back Obama’s environmental regulations is on its way.
Meet the fixer: This innovator is stitching together a clothing movement.