Early in Monday evening’s debate, Hillary Clinton called out Donald Trump on his claims that “climate change is a hoax perpetrated by the Chinese.” Trump claimed that he didn’t claim that, but the trail remained.

Very quickly, though, some big-time media folks fell into a hoax vortex of their own, tweeting claims that the Trump campaign was deleting his tweets in real time. (Then later, the Twitter user who claimed that Trump was deleting tweets deleted his claim about the deleted tweets. Does your head hurt?) 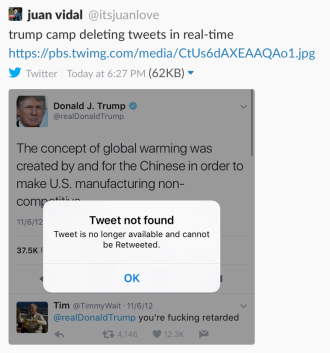 Yet as of an hour or so later, Trump’s original “it’s a hoax!” post remained. Trump the person might not be crying hoax any longer, but Trump the Twitter persona remains true to itself.