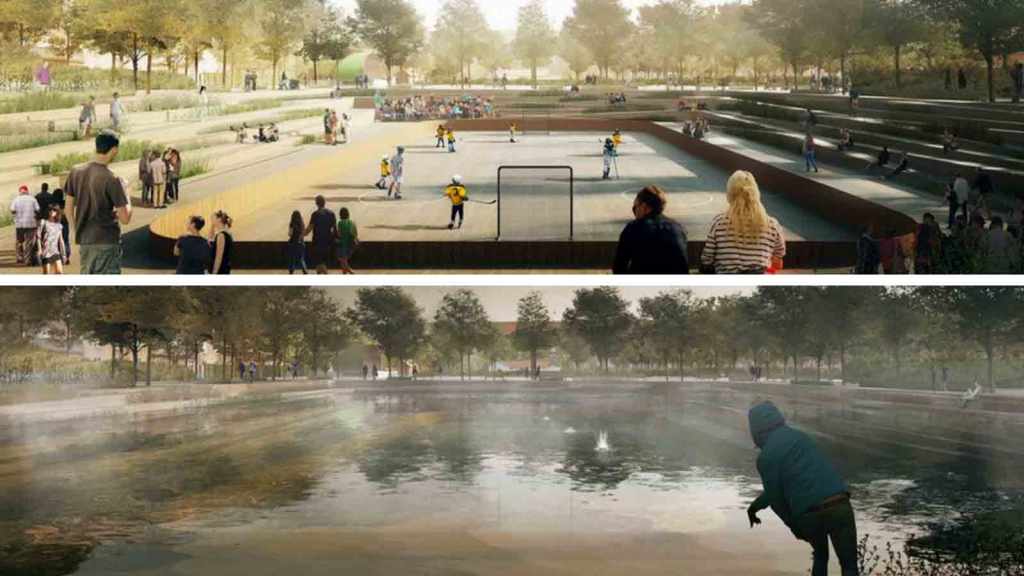 The Danes may be among the happiest people in the world, but it’s going to take more than a good attitude to prepare for Denmark’s coming deluge. Climate change has big plans for the country, including loads and loads of heavy downpours.

In just the past five years, Denmark’s capital, Copenhagen, has been hit by two alleged “100-year floods” — in other words, floods so disastrous, they’re only supposed to occur once a century. So what’s the best way to paddle a waterlogged city to safety? Here’s one standout effort: an urban park called Tåsinge Plads that transforms into a small pond when Copenhagen gets doused. That may sound gross and soggy, but it actually seems really cool. From CityLab:

During heavy rains, the flowerbeds fill with water and wait to drain until the storm runoff subsides. The upside-down umbrellas collect water to be used later to nourish the plantings. And clever landscaping directs stormwater down into large underground water storage tanks. Above those tanks are bouncy floor panels that children love to jump on — when they do, the energy from their feet pumps water through the pipes below.

Tåsinge Plads is just one of such pond-parks that play a part in Copenhagen’s larger redesign of water infrastructure. The city faced two options to prepare for its onslaught of precipitation, according to CityLab: Update its “gray” infrastructure (that’s all the stuff that deals with poop) and expand the sewer system, or deal with “water at street level through a network of parks, cloudburst boulevards, and retention zones.” Copenhagen chose the latter and formed a Climate Adaption Plan that encompasses some 300 creative, surface-based solutions.

Climate change is creating a sink or swim situation in Denmark. Let’s hope this new water infrastructure plan puts the “cope” in Copenhagen.