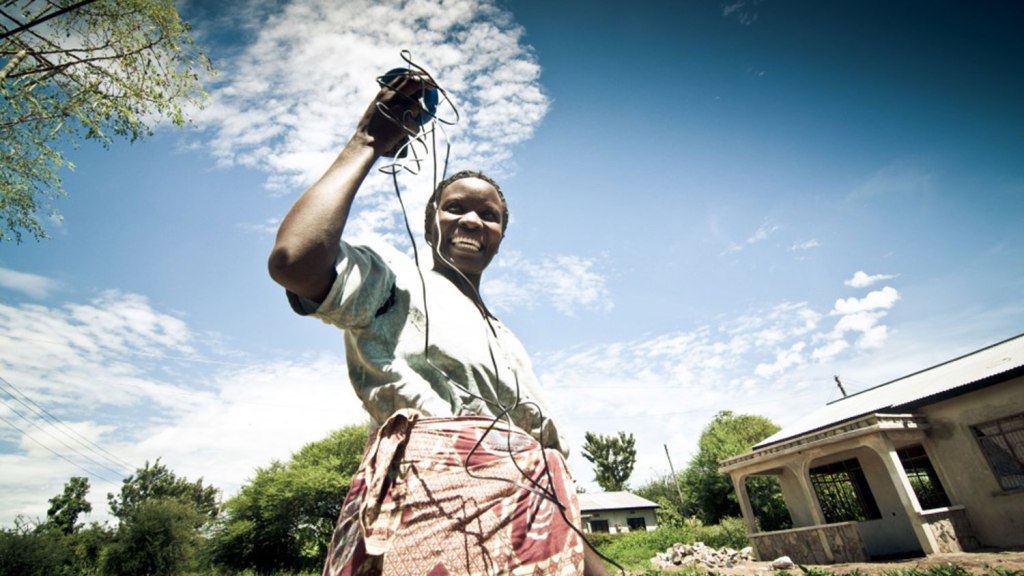 Back on October, I did a couple of posts — one, two — on the Scylla and Charybdis of modern times: energy poverty and climate change. On one hand, nearly a third of the human family lacks access to basic energy services like light, refrigeration, and charging for cell phones (which have become a necessity almost everywhere). On the other hand, lifting all of those people up to the level of energy access enjoyed by wealthy Westerners, even the least wealthy and most thrifty of wealthy Westerners, would produce enough carbon pollution to fry the planet.

Debate around this issue has been somewhat polarized, since the gloomy assumption shared by both sides is that if you avoid one danger, you run headlong into the other. More energy for the poor means more climate pollution — it’s a choice of what (or who) to sacrifice.

But a new paper in Nature Climate Change brings a welcome note of calm and hope to the proceedings. It’s somewhat technical, but boiled down, it does two key things.

First, it shows that on-grid and off-grid technologies are not distinct choices but a continuum, a ladder of energy access, everything from consistent grid access to partial grid access to mini- or micro-grids to home solar systems. And second, it shows how at least the first few steps up that ladder can reduce greenhouse gas emissions.

The paper doesn’t propose to solve the ultimate dilemma of providing full energy access to all humanity within planetary boundaries, but it shows that there is a practical road forward, using newly emerging technologies, that can serve to “rapidly increase access to basic electricity services and directly inform the emerging Sustainable Development Goals for quality of life, while simultaneously driving action towards low-carbon, Earth-sustaining, inclusive energy systems.”

The authors begin by demonstrating two things I discussed in my earlier posts: first, that electricity access is directly correlated with quality of life; and second, that there are limitations on the expansion of centralized grids that have left millions with insufficient energy access and threaten to leave millions that way even decades into the future.

One purpose of the paper is to argue that new policies and technologies make it possible to fill that access gap. Here’s what they envision:

Combined with policies recommended by the International Energy Agency (IEA), new technologies can bring everyone now lacking energy access onto the energy ladder.

What enables this shift is an intersection of several trends, including:

These trends can come together behind a nonlinear shift in how energy works in the developing world. The paper offers these two graphs to illustrate the point:

Mobile phones have become ubiquitous almost overnight, allowing the global poor access to new financing arrangements and real-time monitoring of power systems. And LED lighting is right behind, radically reducing the energy demand of, and pollution from, lighting, one of the most important rungs on the energy access ladder.

These new distributed technologies allow a broader range of possibilities to fill gaps in energy access:

High-performance, low-cost photovoltaic generation, paired with advanced batteries and controllers, provide scalable systems across much larger power ranges than central generation, from megawatts down to fractions of a watt. The rapid and continuing improvements in end-use efficiency for LED lighting, d.c. televisions, refrigeration, fans and [information technology] enable decentralized power and appliance systems to compete with legacy equipment, on a basis of cost for energy service, for basic household needs. These rapid advancements in basic technology supporting clean energy both on- and off-grid are predicted to continue. [my emphasis]

Systems all along this range are popping up, from tiny “pico” solar appliances to home solar systems to mini-grids. Each type of system faces its own barriers to expansion, which are detailed in the paper. For many rural households and villages, however, the combination of off-grid power and super-efficient end-use appliances can already beat legacy systems (mainly diesel generators and crappy appliances or cook fires) on price.

Non-technological barriers — which have often been an even greater impediment than technological barriers — are beginning to fall as well. Coupled with advances in technology are advances in “business models, institutional and regulatory support, and information technology systems.” Policies are driving rapid deployment and new models of financing are enabling customers to pay in ways they are more comfortable with.

To estimate the benefits of an energy access push in poor areas, the authors took Kenya as an illustrative case study. They modeled what would happen if existing household spending on kerosene — the default choice for lighting in Kenya today — shifted to either off- or on-grid lighting service.

When it comes to pollution, it turns out that anything’s better than kerosene, which not only produces local pollutants but also “black carbon” that drives climate change. When black carbon is taken into effect, it turns out that shifting from kerosene to any kind of electricity reduces climate pollution. “Shifting away from fuel-based lighting to either on- or off-grid power is thus a significant mitigation opportunity,” they conclude.

When it comes to equality of access — the proportion of income the poor spend on energy services vs. the more well-off — the status quo, kerosene, is again the worst. Off-grid energy is an improvement and on-grid energy is the best (which makes sense, since all grid users pay the same unit cost for energy). “This analysis clarifies,” the authors say, “how off-grid technology is an important intermediate step to improve service for those who cannot access the grid because of pervasive barriers in access.”

Overcoming those barriers to grid access is typically more expensive than obtaining off-grid power: “Compared with the median investment required for cash sales of off-grid power, the full cost of grid connections in Kenya requires twice, to many times more, the liquid capital.” For many Kenyans, off-grid power is a readily available way to take those first few (and most welfare-enhancing) steps up the energy-access ladder.

Many of the benefits of off-grid power will persist even in the event of grid connection. It will encourage use of more efficient appliances and can provide back-up (and thus resilience) in the face of unreliable grid power, which is common in the developing world.

To wrap this all up, the paper’s argument is that we are at a unique moment, on the verge of non-linear change, enabled by a convergence of technological, financial, and social changes. It is now possible to substantially improve the energy access of the global poor even as we reduce climate pollution, with a continuum of off- to on-grid technologies.

Can we get all the way the way to full energy access without tipping the climate into chaos? Can we navigate all the way through without running aground on Scylla or Charybdis? It’s impossible to know yet. But we know we can get started.