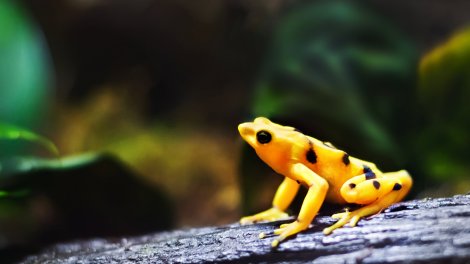 Humans have shuffled and squelched so many different species that on the death-and-destruction scale, we rank up there with asteroids. One of our latest victims? Amphibians, which have been dying in droves since a mysterious fungal infection went global, wiping out frogs everywhere from the remote jungles of Central America to the insulated glass cases of the Melbourne Zoo.

New research suggests that the pathogen responsible for the frogs’ plague, a fungus nicknamed Bd (that’s Batrachochytrium dendrobatidis to you; “chytrid” to friends) could potentially be staved off by another group of voracious micro-predators. Whether that is enough to bring the Panamanian golden frog and its amphibious ilk back from the brink remains to be seen — but scientists are willing to try, even if that means going microscopic on ecosystem management. 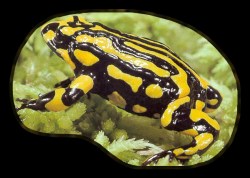 All of this started when a team of conservation ecologists, studying amphibians in the French Pyrenees, noticed that Bd was more prevalent in some lakes than in others. Lakes with low concentrations of Bd, they discovered, were high in other kinds of tiny critters (technical term) that seemed to be eating the Bd spores before they could infect tadpoles. Don’t let their size fool you; these single- or multi-celled organisms are some ruthless predators. In the lab and in the field, they cleared Bd particles out of water like it was their job (technical description).

In January, the team, led by Dirk Schmeller and Adeline Loyau of the Helmholtz Center for Environmental Research in Germany, published a study showing that Bd prevalence was almost completely dependent on populations of the critical microbes, and conservation biologists around the world took note. From Scientific American:

The striking ability of the microorganisms to eat fungal spores and protect amphibians — and the fact that this protection did not rely on a combination of environmental factors — was a great surprise to the scientists. “We expected a reduction but not to this level,” Schmeller says, “[but] every pattern we can see in the wild can be explained by the microorganisms.”

If you could boost the microbe populations in Bd-afflicted lakes, even without trying to wipe out every last chytrid spore, the water would be much more amenable to amphibians. Of course, as any ecologist would be quick to point out, it’s not as simple as breeding a ton of French Pyrenees microbes and introducing them to lakes all over the world — shuffling organisms between ecosystems is what caused this fungus-amongus problem in the first place. Instead, microbes from a similar ecological niche will have to be identified in each environment, and then those local predators can be pumped up. 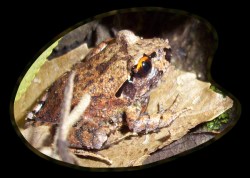 Doug BeckersThe stuttering frog wants to know why everyone makes fun of the way it talks. And why introduced fish keep eating its tadpoles.

Since we often fail to understand how ecosystems work even on the macro scale (Australian cane toads what?) tinkering with the microscopic sounds a little mad-scientist. Schmeller counters, not cackling maniacally even a little bit, that it’s actually very doable. It’s a little like inoculating against a disease, he says — just for lakes instead of people.

But — you knew there was going to be a ‘but,’ didn’t you? — as with anything, it gets more complicated when humans are added the mix. In addition to Bd, the French have introduced game fish to those pristine mountain ponds, where no fish had ever been before. Those fish are popular among anglers and tourists. They also happen to munch the fungus-eating microbes, along with generous helpings from the buffet of seasonal frog caviar.

To save the frogs, we may need to axe a few fish — and that’s not going to be popular among locals who make their money on tourism. This, Schmeller admits, may be an even tougher problem to tackle than the Bd itself. “The moment it costs money, no one wants to do it,” he says.

Still, Schmeller and his colleagues think the experiment would be well worth the cost: Frogs help keep water clean, since tadpoles filter algae from the lakes, and they help keep mosquito populations down. And goodness knows what other ecological purposes those hoppers serve. 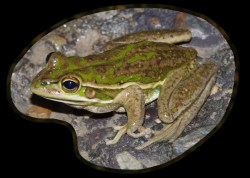 eyeweedThe green and golden bell frog has hope for the future. Maybe.

“People need to understand that unbalancing the ecosystem will always open the doors to some negative effect,” Schmeller says, even if the changes take decades to compound. By then, it’s often too late to undo the harm that’s been done.

Whatever happens to Bd may have wider implications for efforts to manage other species-decimating fungal diseases, like white nose syndrome, which is wiping out hibernating bats in the U.S., or fungus-associated colony collapse disorder in honeybees.

“I am hopeful that it will be possible to reverse the harm these diseases have done,” Schmeller says. “Otherwise I would dig my grave and jump in.” He’s still kicking, so we’ll take his word for it.