How does climate activism differ in the U.S. and Germany? - Grist 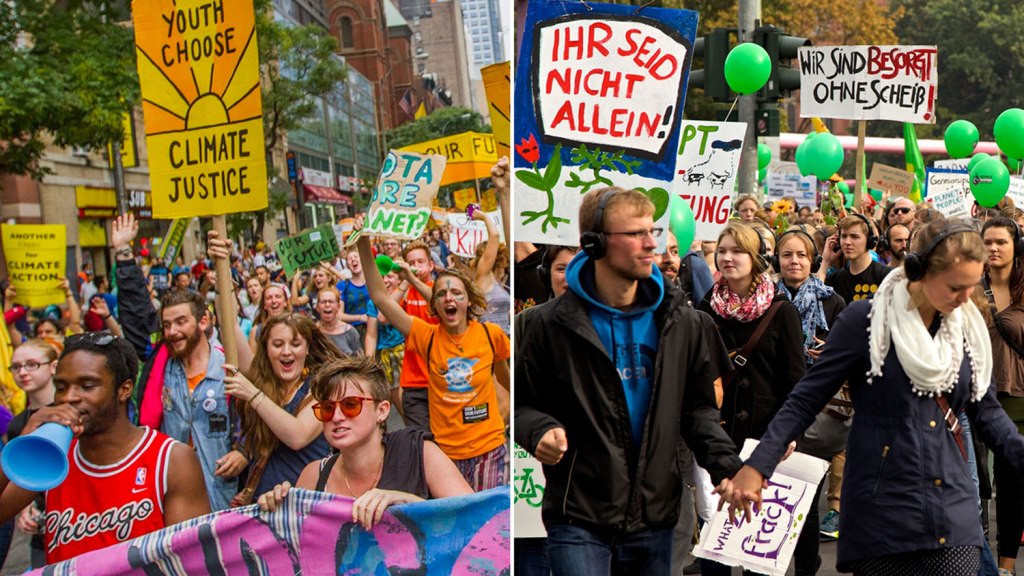 How does climate activism differ in the U.S. and Germany?

A survey of American climate activists by Grist inspired us to conduct our own survey on the priorities of German activists. Both surveys include a dozen or so leading figures of the climate movement in each country. Before comparing the two, let’s first look at what sticks out in each country’s survey.

The causes of and solutions for climate change are highly complex, so it is not surprising that responses vary. Across the 15 answers from the United States, however, we identified the following common themes for priorities in 2015:

1. Grow the climate movement: The top priority for American activists is building and strengthening the U.S. climate movement. It should not only become bigger, but also become more inclusive. More than half of the responses argued that the movement should go beyond tackling climate change and also address social justice and diversity.

2. Fight fossil fuels: Many groups have joined the fight against the Keystone XL pipeline, against fracking, and against allowing oil and gas companies to drill on more land or off the coasts.

3. Enforce existing climate policies: A number of respondents mentioned their support for President Obama’s plan to limit emissions from power plants — the main federal climate program — and called for it to be implemented in a strong and fair way. Only a couple called for new federal climate legislation, likely because the current Republican-controlled Congress would be sure to reject any such new proposal. A few also called for new aggressive policy at the state level, where there’s more of a possibility of success.

The word cloud above shows how often issues were mentioned in U.S. responses. Other priorities noted include preparing for the next presidential election, working on energy efficiency, and making the U.N. climate talks in Paris a success. From a German perspective, one gap seems obvious: None of the U.S. activists talked about the role of nuclear power.

The responses from the 11 German climate activists and researchers also ranged across the whole action toolkit for tackling climate change. But also here, clear priorities can be identified:

1. Accelerating a coal phaseout: The top priority for German activists for 2015 is new legislation to speed up a phaseout of coal power, such as a climate action program, a new electricity market design, and the E.U.’s cap-and-trade program.

2. Making the U.N. climate negotiations in Paris a success: Mentioned by more than half of respondents, a new climate treaty is the second highest priority for German activists.

3. Expanding the energy transition beyond the power sector: Almost half of respondents called for the Energiewende, Germany’s shift to cleaner energy, to get going in the heating/cooling and transportation sectors. 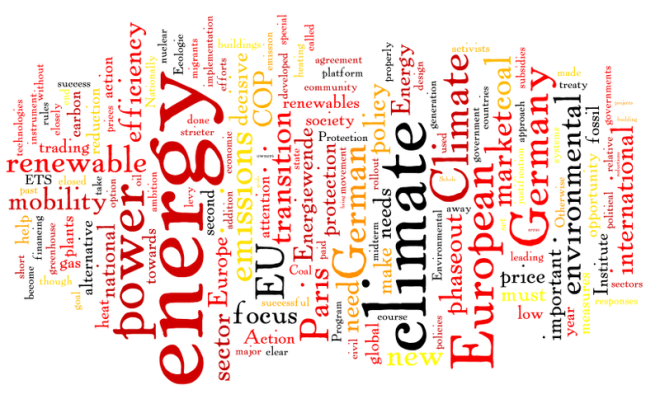 Interestingly, the above word cloud made from the German responses also reveals the different governance levels that Energiewende activists have to navigate: German, European, and international.

A comparison of the two surveys reveals a few salient differences:

1. The American activists are fighting stronger opponents. The main natural resource left in Germany to exploit is lignite, the dirtiest form of coal. The passage of the Renewable Energy Act in 2000 enabled citizenry to compete with incumbent electric utilities profitably, thereby breaking the stranglehold on energy markets. Furthermore, money is not nearly as influential in German politics as in the United States. The U.S., on the other hand, is still home to very powerful oil, gas, and coal companies (the Germans never had enough oil or gas to bring forth big firms in those sectors). American activists therefore still fight the further expansion of fossil fuels. They have a much more uphill battle than their German colleagues, and this fiercer opposition must be kept in mind before we overly praise the Germans for what looks like greater progress on renewables. Simply put, the Germans have had weaker opponents.

2. German activists have made up their mind on saying “Auf Wiedersehen” to nuclear power. The American public continues to debate the role of nuclear, and it is interesting that nuclear is not included in the U.S. responses. Only the executive director of the Sierra Club mentions that “nukes” are often more expensive than “clean energy” — a subtle indication that, at least for him, the latter does not include the former. The Germans, on the other hand, are vocal in rejecting a simple decarbonization strategy if nuclear is a part of it.

3. U.S. activists set a greater focus on racial equality. Heavily emphasized by U.S. activists, this aspect was not mentioned at all in Germany. Why the silence? Germany is clearly multicultural today, the second biggest country for immigrants after only the U.S. In 2012, roughly 400,000 people moved to Germany, a trend that is expected to continue. Foreigners now make up nearly 10 percent of the German population. One possible reason that German activists aren’t focused on this: Dirty energy infrastructure is not disproportionately dumped on immigrants and minorities in Germany the way it is in the U.S.

4. U.S. activists set a greater focus on the impact on the poor. Most German activists see energy poverty as a subset of poverty, which is a social issue. They therefore address energy poverty with social policy, not energy policy. In the midst of rising electricity prices, the Germans did not add coverage of power bills to welfare programs, which already cover heating bills, but rather implemented the country’s first nationwide minimum wage. The goal was to ameliorate the condition of the working poor in general. In addition, the budget for energy auditors who visit households was doubled this year. So Germany is reacting to energy poverty by giving citizens greater spending power and helping them reduce consumption.

5. The German responses reveal a more international focus. Only a couple of U.S. responses mentioned the upcoming climate summit in Paris, while many more of the Germans highlighted it. The U.S. is largely free to design its own energy policy, with some coordination with Canada. In contrast, Germany physically borders on nine countries and has additional grid connections with Norway and Sweden. More importantly, as a member of the European Union, Germany is institutionally embedded in European federalism, so German policy makers and activists keep an eye on E.U. regulation, coordinate energy policy with other E.U. member states, and forge international alliances to pursue interests.

6. German activists focus on new legislation, while U.S. activists focus on enforcing existing legislation and building a stronger movement. German activists’ biggest achievement has been the political consensus around the Energiewende on moving beyond fossil fuels and nuclear power. But it didn’t come overnight; it was hard work over many years. A strong movement came about by including faith groups, unions, farmers, and even manufacturers. This broad political consensus allows the German activists to focus on pushing through new or improving existing climate and energy legislation, both on the national and European level. German and European lawmakers are responsive and willing to act. In contrast, U.S. activists face a political roadblock in Congress. The 2010 climate bill was the last serious attempt in the United States to implement new comprehensive climate legislation on the federal level.

Overall, the American activists have clearly identified steps that will make a difference. In several respects, the Germans have already taken such steps, so the success has been demonstrated. Several of the Americans in the survey talk about engaging with and protecting communities. One secret to the success of the German grassroots energy transition is that communities were the drivers. Ordinary citizens came together to create new energy cooperatives for their own wind, solar, and biomass projects when the energy sector and public officials showed little interest. But we should not oversimplify the matter by leaving the impression that the Germans are a decade or two ahead of Americans. In reality, activists in the two countries face quite different situations, particularly in terms of moneyed resistance.

Finally, the question posed by Grist — “What should climate activists focus on this year?” — might have been posed differently if the idea had originated in Germany. Because Germany has a clear energy policy laid out through 2050 — the Energiewende — it is likely that the question in Germany would have been, “What should be done to speed up the Energiewende this year?” The U.S. is still debating fundamental directional issues, while the Germans are debating details about the direction already decided on. For instance, Americans argue about whether the Keystone XL pipeline is needed for domestic energy security. In contrast, the Germans are not debating whether they need coal power or not, but how specifically it can be phased out.

Craig Morris (@PPchef) is the lead author of German Energy Transition. He directs Petite Planète and writes every workday for Renewables International.

Arne Jungjohann is a political scientist, Twitterbrainer, and energy expert with a focus on the Energiewende, its politics, and communications.