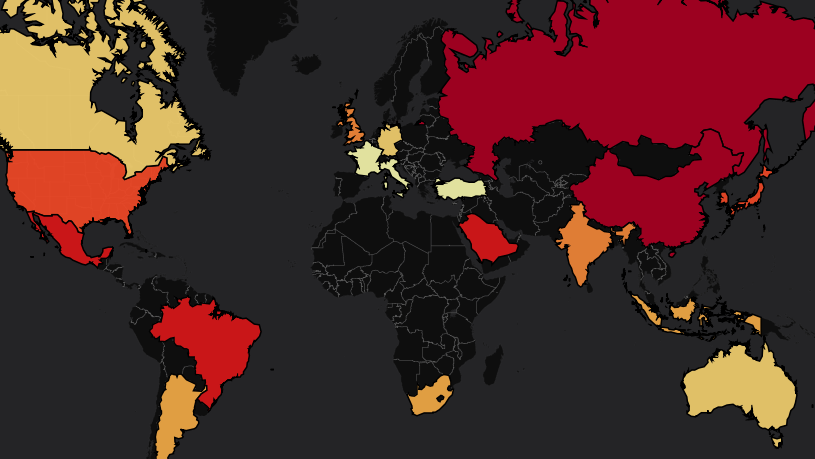 In September of 2009, leaders from the Group of 20 gathered in Pittsburgh and collectively pledged to phase out fossil fuel subsidies. It was viewed as a win for the climate in the run-up to the Copenhagen climate talks later that year. Today, as another round of U.N. climate negotiations approaches, Grist is pleased to report that G20 member countries … still subsidize oil, gas, and coal production. And not just a little. Altogether, the G20 spends $452 billion annually on these subsidies, according to a new report by the Overseas Development Institute (ODI) and Oil Change International (OCI).

Composed of 19 major economies and the E.U., the G20 accounts for roughly three-quarters of global emissions. What these countries choose to subsidize matters. And the half-trillion figure above is probably lowballing it, because the ODI/OCI report doesn’t cover the European Union. The U.S., for its part, still spends upwards of $20 billion annually subsidizing fossil fuel production. Globally, report the authors, about half of all fossil subsidies go to upstream oil and gas sectors (i.e. prospecting and drilling).

A fossil fuel subsidy can take roughly one of three forms. The first is what you’re probably already thinking of: things like direct spending or tax breaks granted by governments to fossil fuel producers. But these national subsidies aren’t the only way to prop up a sector. If you’re a country with state-owned enterprises (SOEs) operating in the energy sector, you can also just invest in fossil fuel production directly through these companies. That’s the name of the game in places like China and Saudi Arabia, which own Sinopec and the brilliantly named Saudi Aramco, respectively. Third, there’s the slightly sneakier subsidy realm of public finance, in which majority state-owned banks and other financial institutions offer loans, grants, or equity financing to domestic (or international!) fossil fuel projects. These loans may or may not wind their way through multilateral institutions like the World Bank. (And these factors don’t account for consumption subsidies or the many indirect subsidies, like building roads for gas-powered cars to drive on and going to war to protect oil supply chains in the Middle East.)

All of these subsidies keep fossil fuel prices artificially low, which leads to more CO2 emissions than the market should support and to difficulties for a renewable energy sector that’s attempting to become competitive.

Here’s a map of the G20 subsidies detailed in the report, with the totals representing the sum of national subsidies, SOE investment (when applicable), and public finance for oil, gas, and coal production. We should, of course, take these figures with a grain or two of coal dust, as these types of subsidies are notoriously difficult to estimate — and notoriously difficult to not double count. Click on a country to see its spending breakdown.

Of course, the world is larger than the G20. In a new paper from the New Climate Economy, the authors detail the subsidy question from a global angle, but they target countries that are actually attempting to phase out fossil fuel subsidies (both within and outside the G20). Here’s what fossil fuel subsidies (and CO2 emissions from energy consumption) look like in more than 40 developing countries: 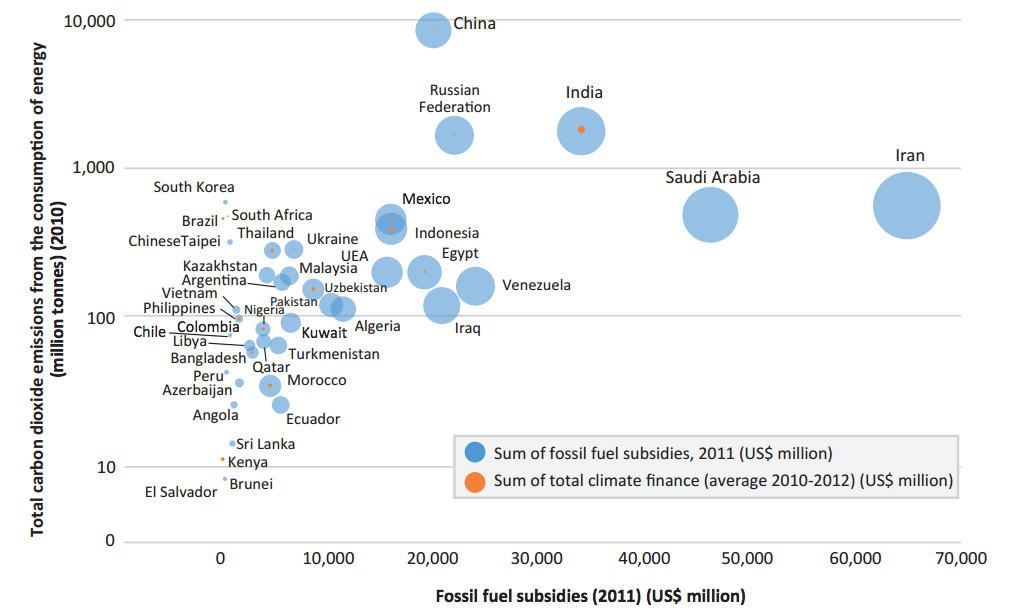 Globally speaking, research suggests that countries are actually on track to spend $650 billion on fossil fuel subsidies this year, according to the New Climate Economy report. To get a sense of the scale of these numbers, see how they dwarf governments’ public health expenditures:

But where the ODI/OCI report is all about the problems, New Climate Economy offers a picture of what sustainable solutions might look like. Its report, which largely focuses on a set of existing fossil fuel subsidy reform case studies, identifies a handful of key pillars for successful transitions. These include actions like ensuring transparency of existing subsidies, creating new institutions dedicated to subsidy reform, setting credible timelines for phasing out fossil fuel subsidies, and fiscally preparing for the impact of reforms before they’re passed.

Success stories are encouraging. In the United Arab Emirates — where oil and gas account for 80 percent of public revenues — the government recently raised the price of gasoline with the aim of increasing efficiency, closing budget gaps, and curbing electricity consumption; and has seen broad success along these lines. Certainly, with a falling price of oil, cutting subsidies can free up public funds and decrease projected deficits, but that’s not the only consideration. As Gulf energy expert Robin Mills wrote for the UAE’s The National this summer, “Instead of going up in smoke, fuel subsidies can be diverted to improving infrastructure, education and health.” Indeed, this summer, the UAE announced it would end all major petroleum subsidies, largely on environmental and development grounds. The IMF predicts that the UAE’s $22 billion 2013 fossil fuel consumption subsidies are expected to fall to $16 billion this year. Which is a start.

New Climate Economy reports that phasing out fossil fuel subsidies could cut global CO2 emissions by up to 13 percent by 2050. And what can governments do with the money they’re not spending on this chunk of the energy sector? Of course, spending the cash on other parts of the energy sector is a start. But the message the authors drive home is that the freed-up funds can also be redirected to households to help with energy costs. Or, you know, health costs. In fact, it turns out that the most successful fossil fuel subsidy reforms do exactly these kinds of things. “Removing these subsidies can spur a virtuous circle, freeing up scarce government funds to be spent on other critical priorities, including better targeted support for the poor,” said Helen Mountford, program director at the New Climate Economy, in a statement. Case in point: In the Middle East and North Africa, only 17 percent of attempted reforms that failed to offer targeted financial support to households succeeded. For reforms that did, 100 percent were successful. That’s the virtuous circle at work.