Photosynthesis and Antarctica. It may not be the most intuitive combination, but the icy continent — famous for sculptural icebergs and marching penguins — is also home to communities of blooming algae, mosses, lichens, and even one species of grass.

They’re rare, of course: Less than one percent of the entire continent is permanently ice-free to begin with. And what terrestrial vegetation does exist must rely largely on melting snow and ice for its water supply.

It’s all part of a fragile ecosystem that scientists are eager to understand as global temperatures rise, affecting not only large sheets of Antarctic ice but also the delicate balance of life there.

A team of U.K. scientists recently created the first-ever large-scale map and estimate of the extent of green algae on the Antarctic Peninsula — a mountainous extension that stretches more than 800 miles toward South America and has experienced one of the most rapid rates of warming in the world. The study results, published in the journal Nature Communications, show that the “green snow” is a significant carbon sink for the continent, absorbing approximately 479 tons of carbon a year through photosynthesis. 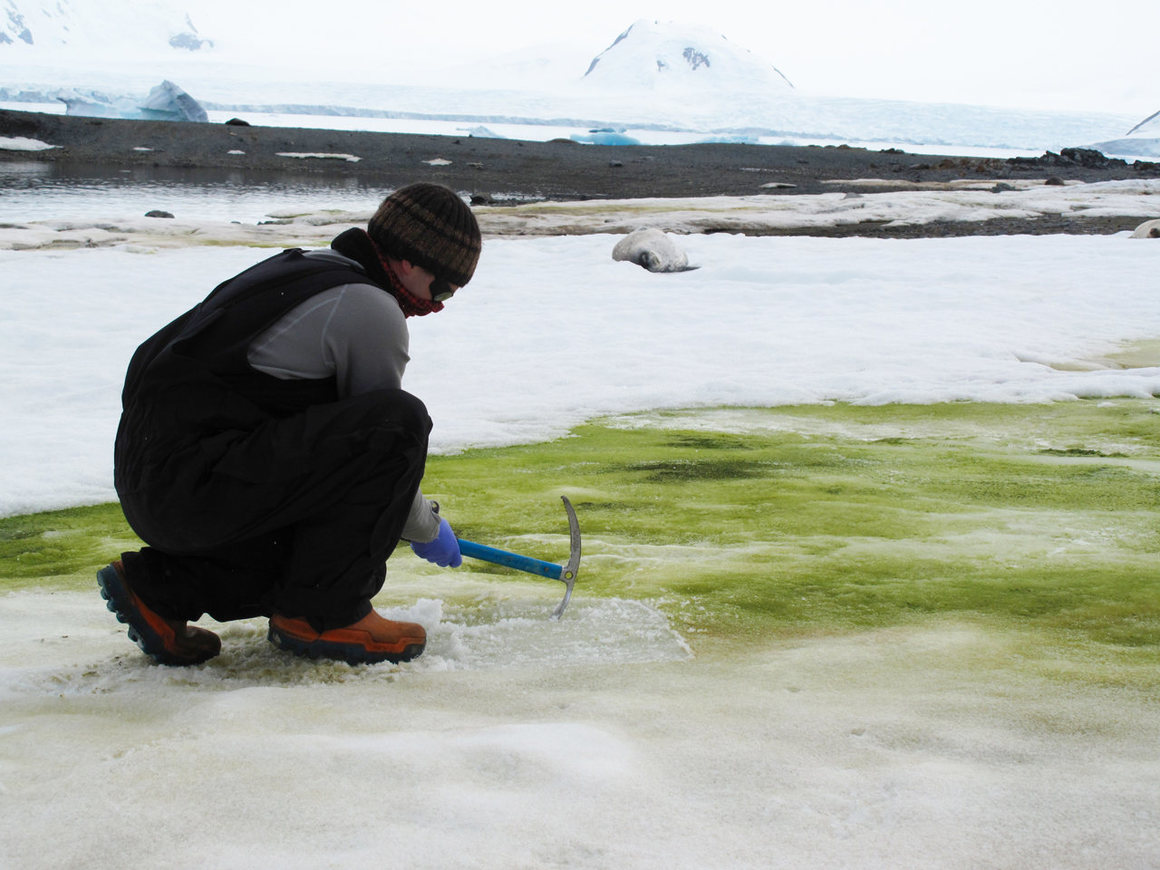 “On a global scale the carbon dioxide absorption is tiny, but at the same time it’s extremely significant for Antarctica,” says Matt Davey, who led the study by researchers from the University of Cambridge and the British Antarctic Survey. The tonnage, he adds, is roughly equivalent to the amount of carbon emitted by 875,000 car trips averaging 10 miles per journey.

The amount of carbon absorption from Antarctica’s algal blooms — which come in green, red, and orange varieties that can make the snow where they dwell appear colored — is likely to be much higher, Davey says, as scientists gain a fuller picture of their total biomass across the continent.

Algae communities tend to be relatively abundant along the coastline of the Antarctic Peninsula during the austral summer months of December through February, when the average temperature is just above freezing. The green algae included in the study favor wet, slushy snow because the microorganisms need liquid water to reproduce, says Davey. They also thrive near penguin colonies, bird nesting sites, and seal hangouts, as animal poop offers nourishing nitrogen and phosphate for the blooms.

To achieve greater accuracy in their results, the scientists supplemented data from the European Space Agency’s Sentinel 2 satellite with measurements from the field. Information from the satellite, which measures specific wavelengths of light reflected off the Antarctic surface, could be hampered by cloud cover and false signals that could be misread as green algae, says Andrew Gray, the paper’s lead author. 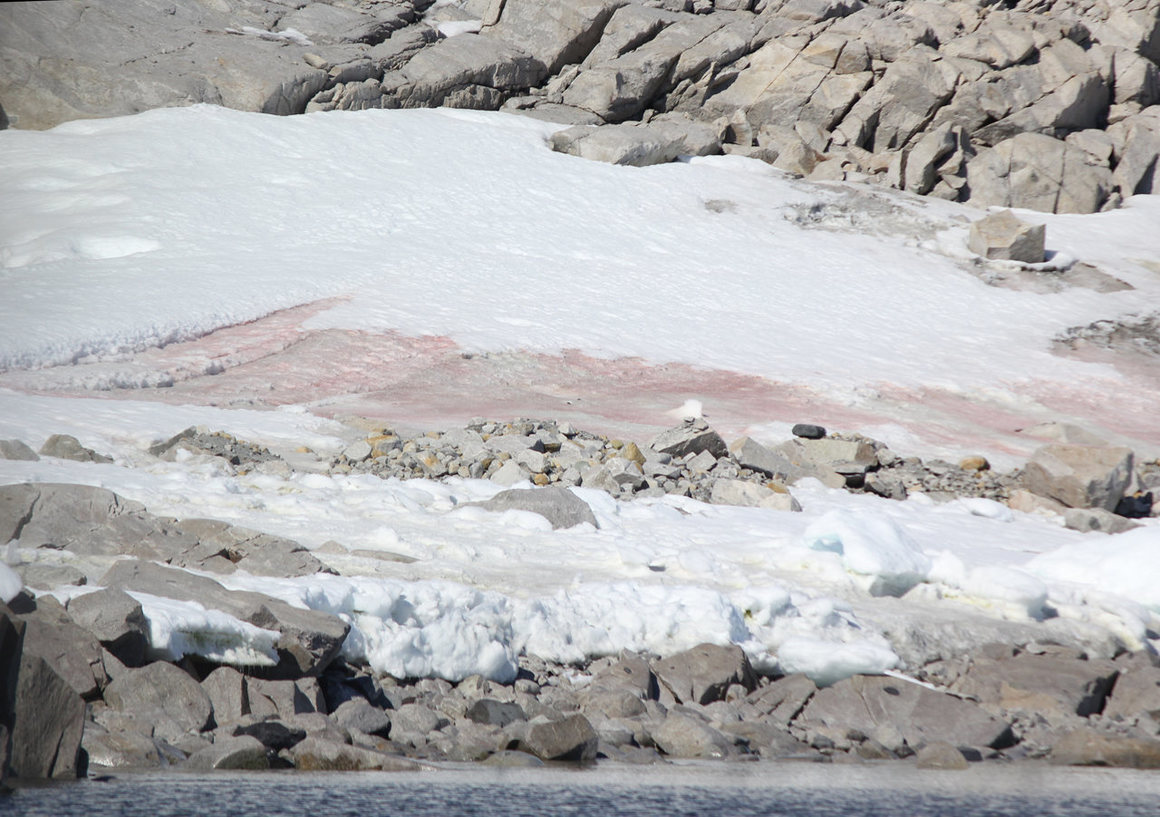 “Pink snow” is also found on Antarctica. The recent study looked only at green algae, but researchers hope to incorporate red algal blooms too, in an effort to better understand the algae’s life cycle and dynamics within the Antarctic ecosystem. Matt Davey

The researchers also invited citizen scientists to send photographs of algal blooms taken over several summers. “It’s great data for us because we can’t be everywhere,” says Davey, who recently started a new position at the Scottish Association of Marine Science in Oban.

Red and orange algae were excluded from the study because they have pigments that can interfere with the satellite, says Gray, a researcher at the University of Cambridge and the NERC Field Spectroscopy Facility in Edinburgh. “There are red species and green species,” he says. “But you also get green species turning red in the same way you get trees turning red in the autumn.”

(The study notes that the green blooms detected by satellite may include some red and orange cells, but its findings are based on readings of chlorophyll, a green pigment, and assumes the blooms were predominantly green species.) 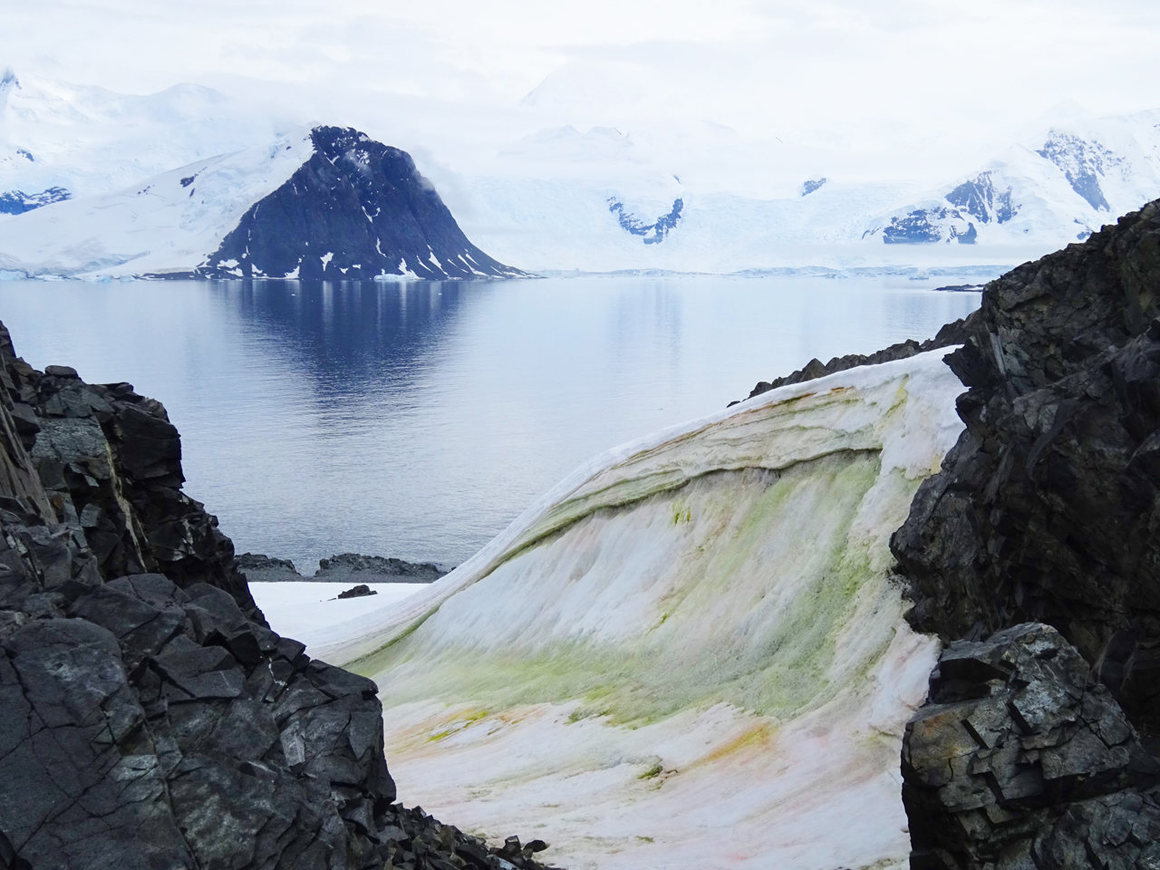 A big question for scientists studying all types of vegetation on Antarctica is how its ecosystem will fare as higher temperatures encroach on this remote region of the planet. (In February, Brazilian scientists reported the hottest temperature ever recorded in Antarctica: 20.75 degrees C — or nearly 70 degrees F.)

Current predictions forecast an expansion in algal blooms and plant growth as snowmelts accelerate and new ground opens up. But like so much in nature, a number of dynamic and interconnected factors are at play. Among other things, the impact of climate change on penguins, birds, and seals may also affect the survival of algae, mosses, and their brethren — interwoven links of life whose future is now shifting at a not-so-glacial pace.