In some parts of the country, climate change may be the most controversial subject that science teachers bring up in their classrooms. “People oppose environmental things because they’re like, ‘Oh, that’s just a bunch of hippie liberal bullshit,’” said Tom St. Clair, a science teacher at Black Hills High School near Olympia, Washington, who’s been working lessons about the overheating planet into his curriculum for years.

But the majority of public school teachers don’t deal with this, because they aren’t mentioning climate change at all. In the United States, it’s up to individual schools or school districts — and solitary teachers like St. Clair — to teach students the science behind the greenhouse effect, sea-level rise, and intensified weather events. But many kids graduate without any formal education about a crisis that is already harming their communities and fundamentally reshaping life on Earth. Fifty-five percent of teachers in a national NPR/Ipsos survey last year —55 percent — reported never talking about climate change in their classrooms.

I spoke with St. Clair during a teacher training in October hosted by his school district as part of ClimeTime, the first statewide climate education initiative in the U.S. After 25 years of teaching, St. Clair jumped at the chance to get together with other teachers in his district to finally get some formal training on strategies and materials for teaching the tricky subject.

There’s a host of reasons that educators shy away from the subject. Some are intimidated by the complexity of climate science. Many science teachers in the U.S. are teaching subjects outside of their field of expertise and already have to catch up on the basics — never mind the nuanced ways the changing climate might relate to their lesson plans. And then there’s the perceived controversy around it: Teachers are cautious of prompting angry calls from parents, despite polls showing that 4 in 5 parents nationwide support their kids learning about climate change. Others were concerned about navigating students’ emotional reactions to learning about the climate crisis.

To address this problem, in 2017 the Washington state legislature passed a multi-million dollar budget proviso for K-12 science education with an emphasis on climate science. The result was ClimeTime, which funds projects and events that connect public school teachers with environmental organizations in their communities, as well as teacher trainings like the one outside Olympia.

At the end of its first year, an estimated 7,500 public school teachers, mostly elementary school teachers — or just over 1 in 10 of the approximately 66,400 public school teachers in Washington state — had taken advantage of professional development resources made available through ClimeTime. Now halfway through its second year, and with $3 million in funding approved for the next couple of years, the initiative’s leaders are thinking about how to improve and refine its services to reach more educators, especially in traditionally underserved communities, and get a better measure of what lessons are reaching students. 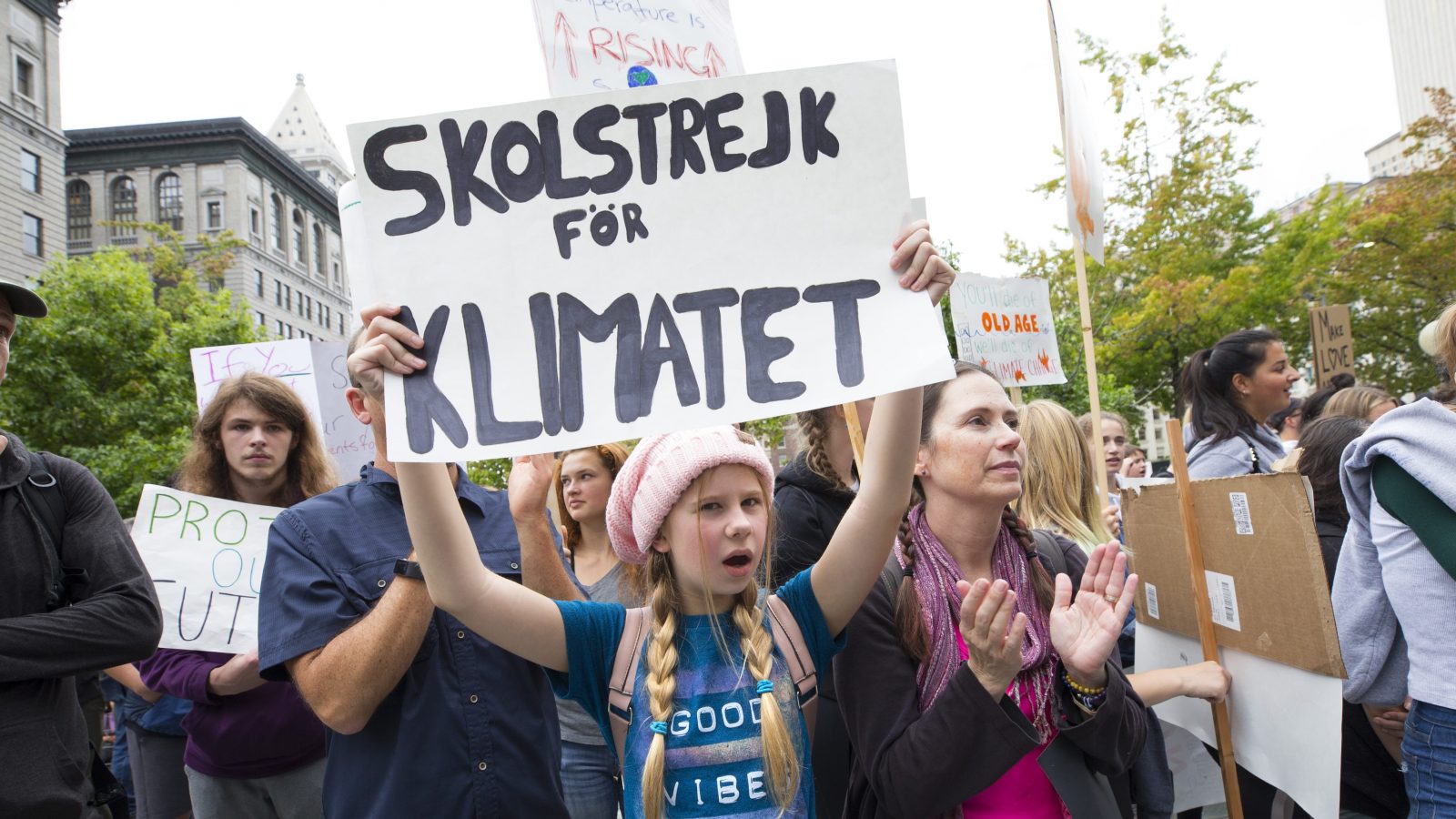 Education isn’t a solution to the climate crisis in and of itself. But educating people — especially young people, who usually aren’t quite as entrenched in their beliefs as adults — could be a crucial step. Recently, a group of scientists listed “strengthening climate education and engagement” as a potential social intervention to slow the rise of global temperatures. In an article in Proceedings of the National Academy of Sciences, the scientists argued that a better-educated public could trigger a political tipping point by voting for measures to slow or stop greenhouse gas emissions.

“It’s hard to imagine effectively addressing climate impacts and climate change without a broad, deep, educational strategy,” said Frank Niepold, the climate education coordinator at the National Oceanic and Atmospheric Administration, who has been working as a partner with state administrators on the initiative.

“Other states are looking at Washington as they move forward on this issue,” said Niepold.

Momentum is building around the world in support of climate education. The U.N. Executive Secretary of climate change, Patricia Espinosa, has said that she hopes to see countries including climate education in their action plans to meet the Paris Agreement. Mexico and Italy both recently pledged to step up their educational efforts, and last month New Zealand rolled out a comprehensive climate curriculum.

Many students learn what they know about the issue from the news, not their teachers. “That’s part of the problem, we’re not learning much about this in school,” high schooler Lily Ashtown told the Spokesman-Review during a youth climate strike in Spokane, a city in eastern Washington, in September.

Greta Thunberg, the Swedish 17-year-old named Time Magazine’s 2019 Person of the Year for striking from school every Friday to demand that world leaders take action, has inspired millions of young people around the world to protest. Better climate education is one of their demands.

The push for climate education is coming from the bottom, not the top, said Ellen Ebert, who coordinates the ClimeTime initiative as the science, environment, and sustainability director at the Office of the Superintendent for Public Instruction. It’s a sentiment I heard over and over from science teachers and administrators: “Students are very curious about climate change, they’re interested, they want to be talking about this in their classes.”

Greenhouse gas emissions have risen quickly in recent decades, making what today’s teachers learned in school pretty out-of-date — that is, if they learned about climate science at all. And new research comes out all the time, so that even younger teachers might need some help staying up-to-date with the latest findings. Stacy Meyer, the science coordinator for southwest Washington, came up with a pretty simple idea to bring teachers up to speed: Get teachers and climate scientists in the same room.

Meyer worked with the education nonprofit Washington Green Schools to put together professional development sessions, dubbed “STEM Seminars,” where public school teachers have the chance to ask scientists questions face-to-face. At the seminars, local climate researchers — many affiliated with the University of Washington’s Climate Impacts Group, one of ClimeTime’s partners — give presentations to school teachers on their area of expertise.* The format caught on, and in the first year of ClimeTime, seminars about how climate change affects everything from agriculture to wildfires took place around the state.

“Even though you’re learning at an adult level and you might be teaching fifth grade,” Meyer explained, “it helps to understand more deeply and then think about how you might translate that for your classes.” The majority of educators who attended STEM seminars reported feeling better equipped to teach their students about the topic of the training, according to survey responses. 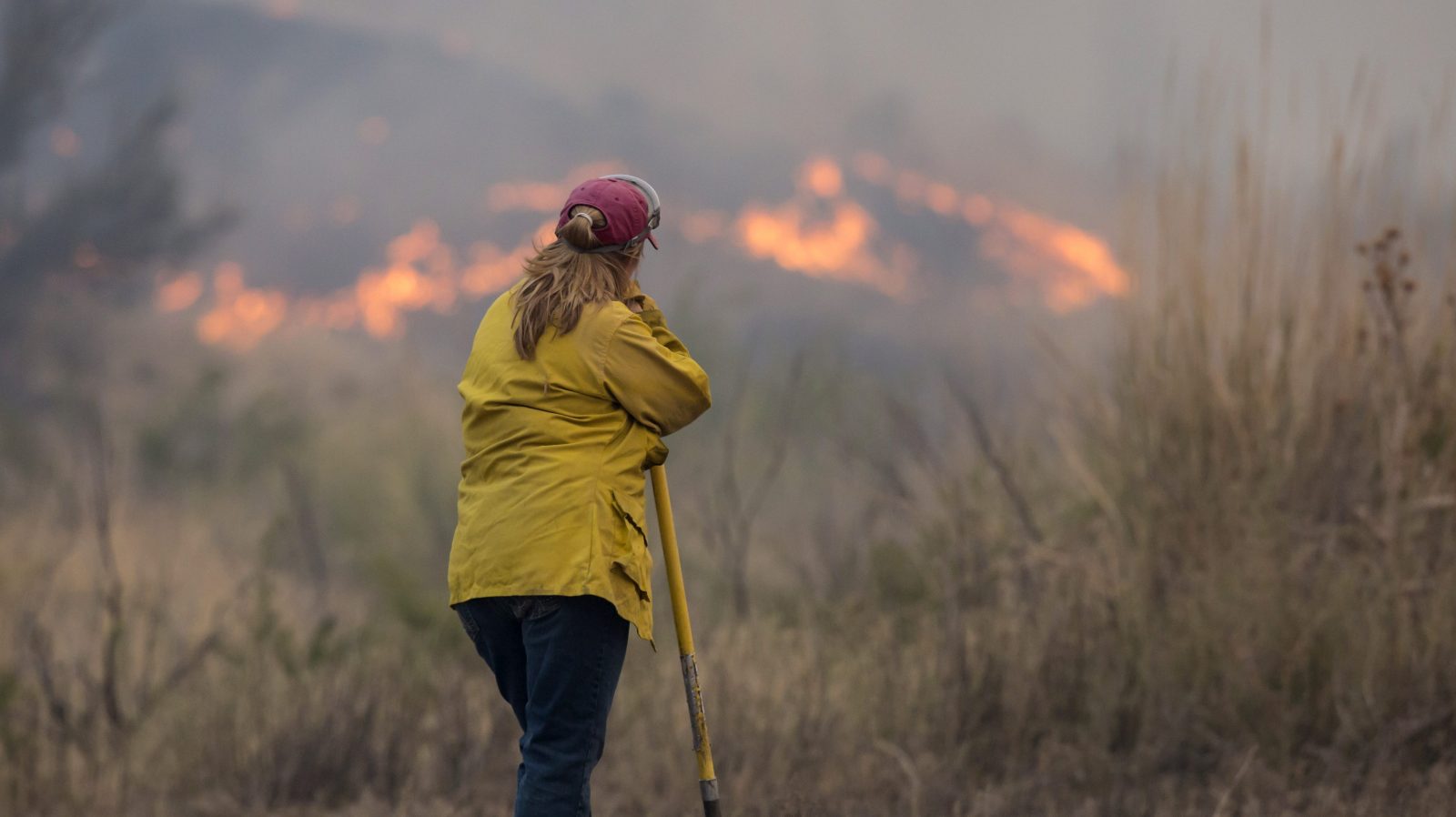 A spotter keeps an eye on a wildfire near Omak, Washington, in August 2015. Stephen Brashear / Getty Images

Even for educators who already know their stuff, ClimeTime offers a chance to meet other science teachers, share lesson ideas, and most importantly, get resources. After all, knowing a lot about something isn’t the same as being able to teach it.

Jessica Hausman is the only science teacher at Oakville High School in the small coastal city of Grays Harbor, Washington. Like St. Clair, Hausman feels like she has a pretty good handle on climate science, having studied earth sciences in college and pursued a career in environmental policy before becoming a teacher. “I’m looking for that extra support finding the strong sources for education, and some tools,” Hausman told me at the training event in October.

Specifically, she’s looking for examples of how the climate crisis is harming her school’s community, and organizations doing climate-related work that she can connect with. Hausman is finding that this local focus helps make abstract, complex concepts — like rising global temperatures — feel real for her students.

Hausman’s school is located in a region of western Washington that’s predicted to receive more rainfall but less snowpack in the coming years as a result of warming temperatures. As seasonal weather patterns get disrupted, Hausman explains to her students, the timing of fish runs changes, too. They quickly grasp the implications for local industries like forestry and fishing. “They’re hungry to learn about this stuff,” she said.

Before the training, Hausman had only had the chance to do a few units on climate change, and was hoping to get resources from ClimeTime to do more —especially around solutions. Her students are quick to ask questions like, “Well, what can I do about this?”

“I see their hope and optimism,” Hausman said, “and I want to feed that in a responsible way.”

That’s another reason why ClimeTime’s leaders have prioritized making teacher trainings specific to the local setting: It’s a way to channel fear and worry about the crisis into action. Since young people aren’t old enough to vote, there’s not much they can do to exercise political clout, aside from skipping school. By introducing them to local nonprofit organizations and sustainability-focused businesses, students see ways they can get involved with solutions, professionally and personally.

So far, no one has developed a neat, STEM Seminar-esque format to equip teachers for the emotional and psychological strains of teaching climate change. Administrators are hoping to address this in future teacher trainings, and teachers are acutely aware that discussing the imperiled future isn’t easy for students, either.

Many of the teachers I spoke with see it as their responsibility to prepare students for a future shaped by climate change. But it’s also just plain pragmatism.

Democratic presidential candidates like to point out that decarbonizing the economy will create a lot of employment opportunities. And even if a sweeping Green New Deal-style plan fails to materialize, people talking about preparing the next generation for “green economy” jobs are onto something — according to the U.S. Bureau of Labor Statistics, the two fastest-growing jobs in the next decade will be wind turbine technicians and solar installers.

“That’s what it’s all about,” said St. Clair, the science teacher from Black Hills High School. “You want a job someday? Learn something that relates to solutions to climate change.”

*Correction: An earlier version of this article misstated the name of the University of Washington’s Climate Impacts Group.

So-called ‘negative emissions’ might actually work, at least in California