The San Francisco 49ers and the Kansas City Chiefs will face each other in the Super Bowl on Sunday in Miami. The game will only last a few hours, but Florida is just beginning a decades-long war with a foe that can’t be beat: sea-level rise. If emissions continue to rise unchecked, Miami’s football stadium could be flooded with standing water and America’s holiest championship game will have to be played somewhere else.

For a sneak peek at what Miami Garden’s Hard Rock Stadium, the venue for Super Bowl LIV, could look like in a few decades, look no further than Florida’s coastline. Nearly 600,000 people in South Florida face “extreme” or “high” risk from sea-level rise, according to the Trump administration’s 4th National Climate Assessment. Already, the sea level around Florida is 8 inches higher than it was 70 years ago. Over the past decade, the rate of acceleration has sped up. Florida seas are now rising an inch every three years. Floods are inundating low-lying cities like Miami even on sunny days.

A new report from Climate Central — an organization that analyzes how climate change affects the public — shows that Hard Rock Stadium, between 4 and 6 feet above sea level, is likely to experience some of this flooding in the coming century. It’s not just the football field that’s at risk of getting swamped by climate change. Local roads, the stadium’s $135 million training facility, the tennis center, and parking lots will face higher odds of being submerged.

Developers recently completed a three-year-long, $500 million renovation of the stadium. But the stadium’s state-of-the-art canopy and high-definition screens won’t save it when the floods come. The Hard Rock Stadium property has at the very least, a 1 percent chance of being submerged by rising seas every year by 2070 if the world continues emitting greenhouse gases business-as-usual. By 2090, the risk of the stadium experiencing serious flooding each year rises to 10 percent.

Remember, this is likely an underestimate. A 2019 U.N. report found that the kind of floods this report is talking about will occur in Miami every year as soon as 2050. Plus, the Climate Central analysis didn’t account for rain-induced flooding, seepage, backed-up storm drains, or other reasons why water might make its way into low-lying areas. 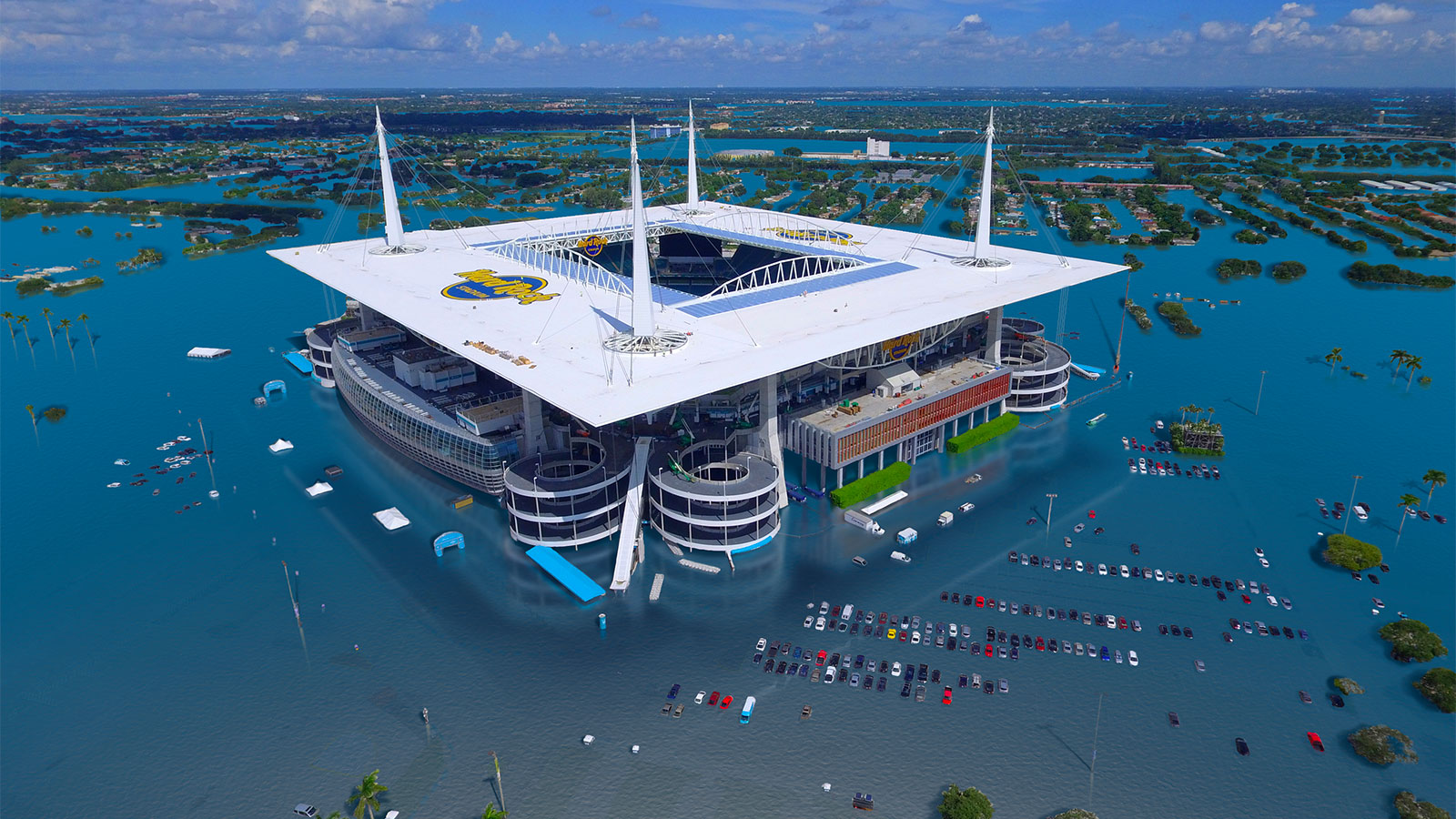 Flooding isn’t the only climate-related issue facing American football teams and their legions of dedicated fans. Extreme heat and bad air quality also threaten players’ abilities to pass, tackle, and run. Another Climate Central analysis that looked at temperatures during football season shows that all 30 National Football League cities have warmed, on average, 2.3 degrees F over the past 50 years. Miami is in the middle of the pack when it comes to rising temperatures, but the home cities of the Nevada Raiders, Minnesota Vikings, and Arizona Cardinals have all warmed more than 4 degrees since 1970.

Hard Rock Stadium is taking some measures to reduce its impact on the planet. In November, the home of the Miami Dolphins announced it aims to eliminate 99.4 percent of single-use plastics by the end of 2020. The move would divert 2.8 million pieces of plastic from landfills every year. And at the upcoming 54th Super Bowl, fans will sip drinks out of aluminum cups instead of plastic ones, pee in waterless urinals, forgo straws, and make their way out to the parking lots under LED lights. It’s a step in the right direction, but it doesn’t address the outsized carbon footprints of events like the Super Bowl. Fans attending a mega sporting event have carbon footprints about seven times larger than people going about their daily lives.

After Sunday’s game, Miami will have hosted 11 Super Bowls, more than any other city. It doesn’t matter how many single-use plastics the Miami Dolphins ban from their stadium — if the world keeps emitting carbon business-as-usual, Miami won’t be able to hold onto that record for long.