The twin smokestacks of the Moss Landing Power Plant tower over Monterey Bay. Visible for miles along this picturesque stretch of the Northern California coast, the 500-foot-tall pillars crown what was once California’s largest electric power station — a behemoth natural gas-fired generator. Today, as California steadily moves to decarbonize its economy, those stacks are idle and the plant is largely mothballed. Instead, the site is about to begin a new life as the world’s largest battery, storing excess energy when solar panels and wind farms are producing electricity and feeding it back into the grid when they’re not.

Inside a cavernous turbine building, a 300-megawatt lithium-ion battery is currently being readied for operation, with another 100-megawatt battery to come online in 2021. Together, they will be able to discharge enough electricity to power roughly 300,000 California homes for four hours during evenings, heatwaves, and other times when energy demand outstrips supply, according to project developer Vistra Energy.

These aren’t the only super-sized batteries that will soon be operating at the Moss Landing plant. An additional 182.5 megawatts produced by 256 Tesla megapack batteries are scheduled to begin feeding into California’s electric grid in mid-2021, with plans to eventually add enough capacity at the site to power every home in nearby San Francisco for six hours, according to the Bay Area utility, Pacific Gas & Electric, which will own and operate the system. Elsewhere in California, a 250-megawatt storage project went online this year in San Diego, construction has begun on a 150-megawatt system near San Francisco, a 100-megawatt battery project is nearing completion in Long Beach, and a number of others are in various stages of development around the state.

Driven by steeply falling prices and technological progress that allows batteries to store ever-larger amounts of energy, grid-scale systems are seeing record growth in the U.S. and around the world. Many of the gains are spillovers from the auto industry’s race to build smaller, cheaper, and more powerful lithium-ion batteries for electric cars. In the U.S., state clean energy mandates, along with tax incentives for storage systems that are paired with solar installations, are also playing an important role.

California is currently the global leader in the effort to balance the intermittency of renewable energy in electric grids with high-capacity batteries. But the rest of the world is rapidly following suit. Recently announced plans range from a 409-megawatt system in South Florida, to a 320-megawatt plant near London, England, to a 200-megawatt facility in Lithuania and a 112-megawatt unit in Chile.

The mass deployment of storage could overcome one of the biggest obstacles to renewable energy — its cycling between oversupply when the sun shines or the wind blows, and shortage when the sun sets or the wind drops. By smoothing imbalances between supply and demand, proponents say, batteries can replace fossil fuel “peaker” plants that kick in for a few hours a day when energy demands soar. Experts say that widespread energy storage is key to expanding the reach of renewables and speeding the transition to a carbon-free power grid.

How quickly that future arrives depends in large part on how rapidly costs continue to fall. Already the price tag for utility-scale battery storage in the United States has plummeted, dropping nearly 70 percent between 2015 and 2018, according to the U.S. Energy Information Administration. This sharp price drop has been enabled by advances in lithium-ion battery chemistry that have significantly improved performance. Power capacity has expanded rapidly, and batteries can store and discharge energy over ever-longer periods of time. Market competition and rising battery production also play a major role; a projection by the U.S. National Renewable Energy Laboratory sees mid-range costs for lithium-ion batteries falling an additional 45 percent between 2018 and 2030.

“We’re almost entirely piggybacking on the growth of lithium-ion battery technology, which is driven mostly by electric vehicles and consumer electronics,” says Ray Hohenstein, market applications director for Fluence, an energy storage technology provider with storage projects totaling nearly 1 gigawatt (1,000 megawatts) set to come online in California within a year. The money put into research for those applications is driving down costs across the board, says Hohenstein. “It’s just like what we saw with solar panels.”

In California, falling battery prices, coupled with the state’s aggressive push toward a carbon-free electrical grid by 2045, have led to a packed pipeline of storage projects. A 2013 bill set a target of 1.325 gigawatts of storage to be commissioned for the state’s grid by 2020. With 1.5 gigawatts of projects now approved — including more than 500 megawatts installed so far — that goal has already been surpassed, according to the California Public Utilities Commission. While there is no precise figure for how much storage California will require to meet its carbon-free goal — the amount depends on the future technology mix, energy use, and other changing factors — some analyses estimate that at least 30 gigawatts of utility-scale storage will be needed by 2045.

When the gigantic Moss Landing project becomes fully operational in mid-2021, it will more than double the amount of energy storage in California. Several other states are also now embarking on major energy storage projects. Among them: New York’s 316-megawatt Ravenswood project will be able to power more than 250,000 homes for up to eight hours, replacing two natural gas peaker plants in the New York City borough of Queens. And the 409-megawatt Manatee system planned for South Florida will be charged by an adjacent solar plant. Touted by utility Florida Power & Light as the world’s largest solar-powered battery system, the facility will replace two aging natural gas-fired units.

Nationwide, a record 1.2 gigawatts of storage have been installed so far this year, according to Wood MacKenzie, a natural resources research and consulting firm. That number is projected to jump dramatically over the next five years, rising to nearly 7.5 gigawatts in 2025. Kelly Speakes-Backman, CEO of the U.S. Energy Storage Association, says that battery storage additions doubled in 2020, and would likely have tripled had it not been for construction slowdowns caused by the Covid-19 pandemic.

Despite its leadership in renewable energy development, Europe has been slower to get on board with storage. “In general, Europe is a bit more conservative,” says Daniele Gatti, analyst for IDTechEx, a United Kingdom-based market research firm specializing in emerging technology. Energy storage development in Europe has been hindered by a restrictive electricity market dominated by government auctions that tend to undervalue storage. Still, some big-battery projects are now taking shape, including the 320-megawatt Gateway system to be built at a new port facility near London. 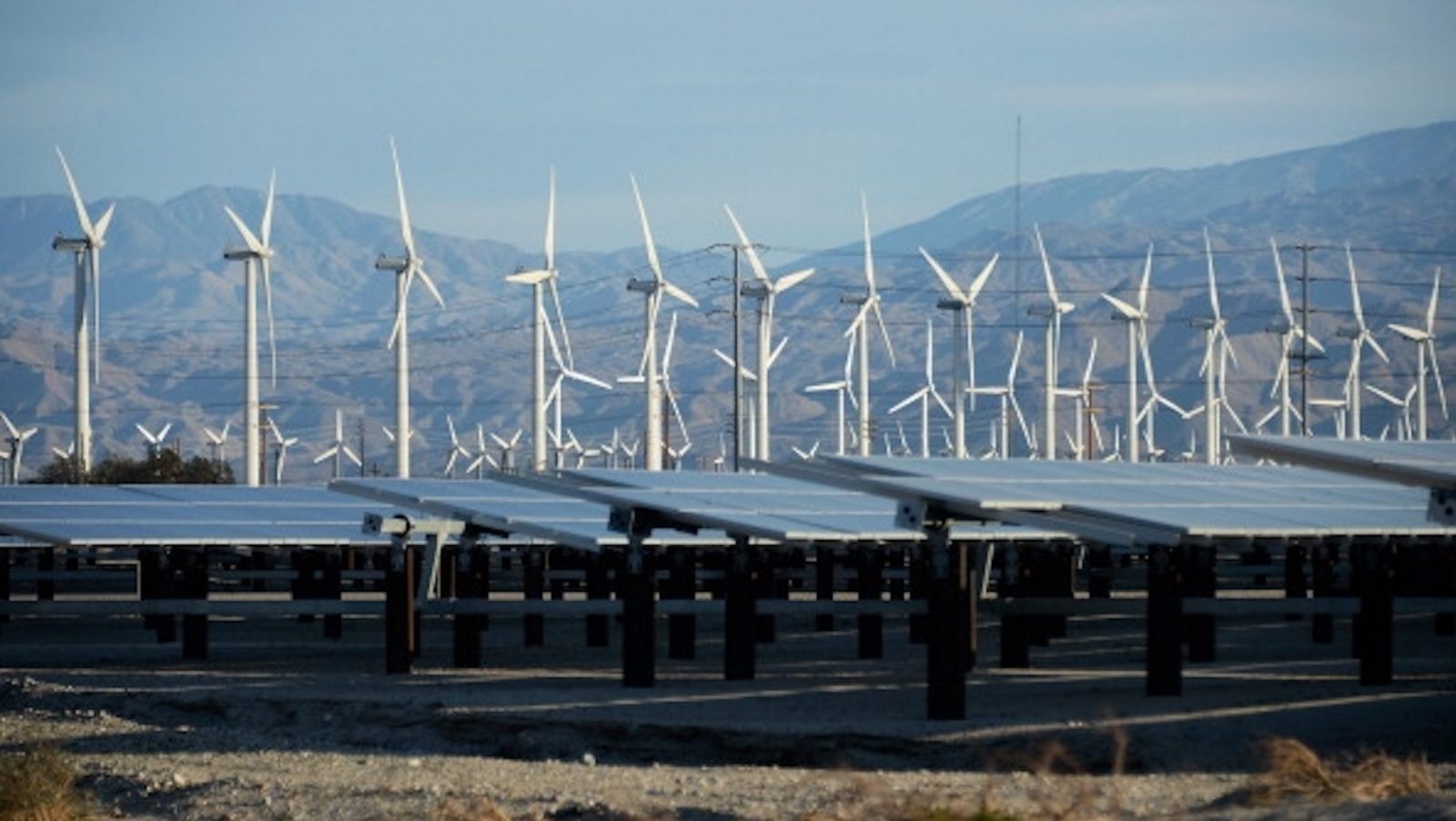 Globally, Gatti projects rapid growth in energy storage, reaching 1.2 terawatts (1,200 gigawatts) over the next decade. Key players include Australia, which in 2017 became the first nation to install major battery storage on its grid with the 100-megawatt Hornsdale Power Reserve, and is now planning to add another 300 megawatts near Victoria. The new system will dispatch electricity between states on an as-needed basis, maximizing the efficiency of existing transmission infrastructure and reducing the need for building new power lines that would sit idle most of the time. Similar projects are gearing up in Germany and elsewhere, highlighting an emerging role for batteries as transmission tools.

And Saudi Arabia has just announced plans to overtake Moss Landing’s standing as the world’s largest battery with a massive solar-plus-storage system on the country’s west coast. The facility will provide 100-percent renewable energy around the clock to a resort complex of 50 hotels and 1,300 homes being built along the Red Sea.

With a recent report concluding that most fossil fuel power plants in the U.S. will reach the end of their working life by 2035, experts say that the time for rapid growth in industrial-scale energy storage is at hand. Yiyi Zhou, a renewable power systems specialist with Bloomberg NEF, says that renewables combined with battery storage are already an economically viable alternative to building new gas peaker plants. Pairing electricity generation with storage works especially well with solar energy, which generally follows a predictable daily pattern. In the U.S., costs have also been helped by the federal Investment Tax Credit, a 30-percent tax rebate for new solar installations. In fact, says Zhou, as more solar energy enters the grid, the cost of operating gas plants actually goes up.

“That’s mainly because they are forced to cycle on and off much more now because of solar penetration,” Zhou says. “This adds wear-and-tear, and shortens their lifetime.”

Batteries are even beginning to reach a size — around 200 megawatts — that enables renewables to replace small- to medium-sized natural gas generators, Hohenstein says. “Now we’re able to truly build these hybrid resources — solar, storage, wind — and do the job that was traditionally done by fossil fuel power plants,” says Hohenstein, whose company is seeing a surge of interest in such large projects.

Adding storage also makes renewable energy more profitable, says Wesley Cole, an energy analyst with the National Renewable Energy Laboratory. “One of the challenges of renewable energy is the more you put on the grid, the more the value declines,” Cole says. Storage helps deal with that by soaking up excess energy that would have been lost in the middle of the day, when electricity demand is lower, and moving it to a time when it is more valuable.

While energy storage is thriving in high-value markets, such as California, battery prices still need to come down more to reach large-scale global deployment. In the U.S., proponents hope the incoming Biden administration will pursue more favorable energy policies, including extending the Investment Tax Credit — which ramps down to 10 percent for commercial solar systems and ends for residential solar in 2022 — and expanding the benefit to stand-alone storage.

Even without further incentives, however, analysts are optimistic that battery prices will eventually drop low enough for widespread energy storage use.

“We see storage being a large player across effectively every future we look at,” says Cole. “And not just one or two gigawatts … but tens to hundreds of gigawatts.”