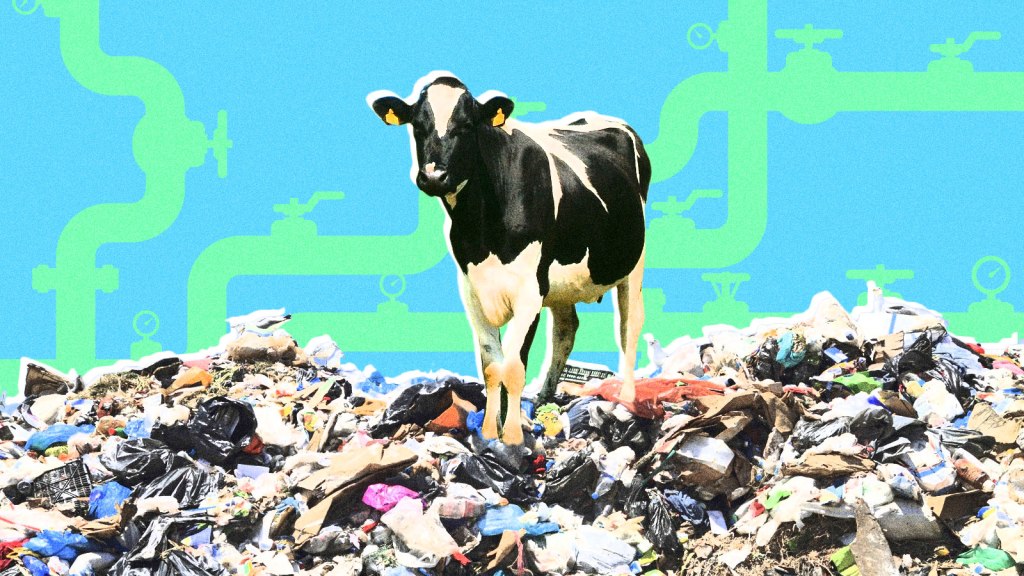 While wind and solar power and electric vehicles tend to dominate the conversation around preventing catastrophic climate change, electricity and transportation aren’t the whole picture. The world also needs to act quickly to reduce emissions from other sources, like the fuels burned in buildings for heating, hot water, and cooking. In colder climates where people rely on fossil fuel heating to survive frigid winters, the carbon footprint of those systems is especially large.

There’s ongoing disagreement about which of these options should prevail, or whether there’s room for both. Gas utilities, eager to remain in business, assert that renewable natural gas (RNG) has a future in buildings. A new report out on Wednesday by Earthjustice and the Sierra Club criticizes the industry’s aggressive marketing of RNG for buildings, arguing that it’s too expensive, there’s not enough of it, and it does not solve the health and safety risks of pipelines carrying methane or burning gas indoors.

Settling this question is urgent, as many cities and states are planning to achieve a low-carbon economy by 2050. In New York, California, and soon likely Massachusetts and New Jersey, state regulators are opening up new proceedings to figure out how to get gas utilities’ and their customers’ plans aligned with greenhouse gas reduction goals. New gas appliances tend to last for at least 20 years, so many of the boilers that are installed over the next decade will still be in use in 2050, and if the fuel powering them doesn’t change much from today, states’ emissions targets will be shot.

Renewable natural gas, or RNG, is a catchall term for natural gas derived from various sources. RNG can refer to gas captured from places that would otherwise release it into the atmosphere as methane, like landfills, wastewater treatment plants, and manure pits on dairy farms. Some utilities already purchase this form of RNG and blend it into the pipeline mix today. There are other methods of producing RNG that aren’t yet commercially available. It can be made from solid waste, certain crops like poplar and switchgrass, and agricultural residues like corn leaves, stalks, and cobs. Another category of RNG is synthetic natural gas, which is produced by splitting water molecules with electricity to create hydrogen gas and then “methanating” the hydrogen gas by adding CO2. Synthetic natural gas would be considered “renewable” if the hydrogen were made using renewable electricity and the CO2 had been captured from sources that would otherwise emit it, like the smokestacks of a power plant. However, no one is producing genuinely renewable synthetic natural gas at a commercial scale yet today.

Sierra Club and Earthjustice don’t reject the idea that RNG could be useful to tackle climate change. They just reject the notion that it’s a feasible solution for buildings. First, it’s a lot more expensive than fossil natural gas, and most forecasts don’t see that changing much in the future. The report cites an analysis by the American Gas Foundation (AGF), an independent research arm of a gas industry group, which found that some sources of RNG could cost between $7 and $20 per million British thermal units by 2040, but others could be as high as $45. Right now, the cost of natural gas is only $2 to $3 per million British thermal units, so a switch to RNG could mean steep rate hikes for customers.

The AGF study also predicted that by 2040, scaling up all of the different methods to make RNG in the U.S. could produce between 1,910 and 4,510 trillion British thermal units per year. Sierra Club and Earthjustice point out that the total consumption of natural gas in 2018, across all end uses including buildings, industry, and power plants, was 31,000 trillion British thermal units per year — so even under the most optimistic scenario, RNG would meet only a fraction of the demand met with natural gas today.

While the AGF study demonstrates that RNG could meet residential needs — U.S. residential consumption was 4,996 trillion British thermal units in 2018 — the environmental groups argue that the limited supply should be reserved for sectors where electrification is much harder, like aviation, shipping, and heavy industry. They also note that leaks from gas infrastructure are more or less inevitable, which means that producing RNG from sources that aren’t currently emitting methane, like energy crops, could ultimately increase methane emissions, which have a higher global warming potential than carbon dioxide. Ultimately, their question is, why waste the small amount of RNG from existing methane sources on buildings, which have other options for eliminating their emissions?

“I don’t think anyone can look at these numbers and credibly say we shouldn’t be aggressively trying to electrify as much as we can, as fast as we can,” Matt Vespa, an attorney for EarthJustice, told Grist. “It’s a feasible, cost-effective solution that’s available on the market today.”

Sierra Club and EarthJustice aren’t the first groups to call the feasibility of heating buildings with RNG into question. E3, an energy economics consulting firm, analyzed various scenarios for achieving California’s emissions goals in a report published in April and found that electrifying building appliances is likely to be a more cost-effective, less risky long-term strategy than RNG, with additional benefits in terms of air quality and public health. In short, this is because whichever decarbonization strategy the state pursues, gas prices are likely to increase in the long term, either because more and more costly RNG will be put into the system or because some customers will switch to electric appliances, shrinking the pool of customers paying to maintain the gas system. Either way, as gas prices rise, customers will be incentivized to go electric. In other words, while going all in on RNG for buildings could save gas utilities from obsolescence, it could also decimate their customer base.

However, E3 and other experts note that the long-term outlook for RNG — particularly for synthetic natural gas — is somewhat uncertain, and we could potentially produce a lot more of it, and more cheaply, depending on how quickly the industry scales up. In comments to the California Energy Commission, Lawrence Livermore National Laboratory scientists expressed concern that the level and speed of adoption of electric appliances by consumers is highly uncertain, as are the costs of electrification versus RNG. They wrote that letting all of the options compete “would promote the largest levels of decarbonization while minimizing the risk of failure.” A recent study on decarbonization prepared by the Brattle Group, a consulting firm, for regulators in Rhode Island also found that an all-of-the-above approach, at least in the near term, makes sense.

“We believe that the uncertainty is large enough that as of today, you shouldn’t put all of your eggs in a single electrification basket,” Jürgen Weiss, an economist at the Brattle Group, told Grist. “We’re not saying wait for 10 years. We’re saying pursue all of these technologies aggressively for the next decade. That way we make progress while we learn about how quickly the cost of heat pumps and the production of renewable gas from electricity decline. And then we can shift.”

The economics of heat pumps vary. In new buildings, they are cheaper than gas systems to install, but retrofitting existing buildings for electric heat can be expensive. On average, heat pumps are more efficient than natural gas boilers. However, right now, natural gas is cheaper than electricity, so that efficiency doesn’t always translate into cost savings, unless the customer is switching from a more expensive fuel like oil or propane. Also, even the best-designed heat pumps can lose efficiency in extreme cold, so in some parts of the country switching to heat pumps would cause huge spikes in electricity demand on the coldest winter days. That electricity will have to be both affordable and reliable in order to make sure people don’t freeze to death.

The RNG Coalition, an industry group, told Grist that maintaining a parallel gas infrastructure system as a backup to electric appliances would add a layer of resilience to the system. E3 also recently suggested to a New York state climate council that in the coldest parts of the state, customers may wish to maintain backup gas systems even if they switch to heat pumps.

The problem with maintaining the gas system, or pursuing both options for the next 10 years, is that it means 10 more years of making investments in gas infrastructure that will never pay out if RNG doesn’t scale up or if customers begin to rapidly adopt electric appliances. It could mean 10 more years of system improvements and expansions that fewer and fewer customers are ultimately saddled with paying for.

“That is probably the most tricky issue in the whole story,” Weiss admitted. He said that heat pumps are likely to play an important role in the future, possibly foremost for cooling as global temperatures rise. (They are versatile appliances that can provide both heating and cooling.)

Even if not many people are buying electric appliances today — which the gas industry is quick to point out — government policies and incentives, technological improvements, workforce development, and consumer education have the potential to change that trend. But those things take time. Decarbonization deadlines are just a few decades away.