Recently France’s ecology minister, Ségolène Royal, said people should stop eating Nutella because it contains palm oil. But then Greenpeace stepped up to defend Nutella, pointing out that boycotting palm oil wouldn’t solve the problem and telling Quartz that Nutella-maker Ferrero is actually working hard to be part of the solution. “We therefore consider Ferrero to be one of the more progressive consumer-facing companies with regards to palm-oil sourcing,” Greenpeace said in a statement. When even ecology ministers are confused, you can be excused for failing to track the palm-oil heroes and villains.

The way environmental groups are approaching palm oil has shifted, because the industry has shifted — now every major palm-oil trader has committed to ending deforestation. Commitments are great, but now palm-oil companies face a bigger challenge: actually stopping the momentum toward rainforest clearance. Palm-oil growers won’t meet that challenge unless they have support — and a mandate — from their customers, who are food companies.

The Rainforest Action Network has been keeping track of 20 major brands that use palm oil, and it just released an update today: 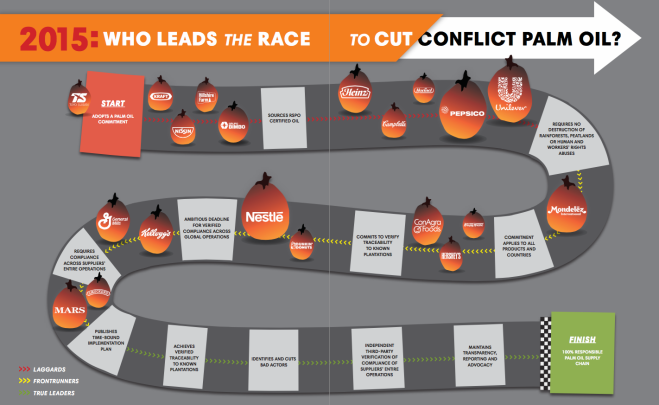 RAN isn’t tracking Ferrero, but said that it would be among the most responsible firms on the list. If you want to put pressure on a company to improve its palm-oil performance, don’t stop buying Ferrero’s Nutella. Boycotts wouldn’t have much effect, anyway, because palm oil is in about half the packaged foods in any given grocery store. The more effective route, if you want to end palm-oil related deforestation and exploitation, would be to send an email. RAN has set up a page for funneling activist notes. Or, if you are a ramen eater, just write directly to Toyo Suisan Kaisha, Ltd., maker of Maruchan noodles, to let them know that you’d like them to step up their game.