First comes the drought, then the deluge. It’s not just that climate change is making the weather more extreme, with hotter dry spells and warmer winters that transform mountain snowpack to water. It’s also that the drought has actually made flooding more likely by diminishing the soil’s capacity to soak up moisture. It’s as if dryness defends its turf against wetness — baking the dirt into an impermeable crust, or turning it into a hydrophobic crumb that causes raindrops to bead off.

The result: more scarcity where people need water most, and greater abundance were we don’t want it at all. In other words, the water that could trickle down to overdrawn aquifers and refill dry wells instead ends up lapping against your bedspread. We’ve already seen floods in Texas and Los Angeles; more are bound to come.

There’s a potential solution: redirect swollen rivers onto farmland to recharge groundwater while also protecting cities in flood zones. As Heather Mack has written for Grist, researchers have tested this out with a few innovative farmers in California’s San Joaquin Valley, and it worked great. The water sank into the ground, and the crops were none the worse for wear.

So now people are asking, how much of the problem could this fix? Two recently published studies are providing the first estimates.

How much water is there?

California farmers pump about 30 percent of their irrigation water from wells in a typical year — a total of about 34 million acre feet (the amount needed to fill a one-acre tub with a foot of water; it’s roughly equal to a gajillion gallons).

That’s a lot, but California farmland aquifers are already getting over 31 million acre feet in recharge each year. The annual overdraft is 1.1 to 2.6 million acre feet. This is an average: This year, it’s much worse; at other times it’s much better. For our back-of-the-envelope figuring, let’s stick with the average, which includes both the wet and dry years.

If we could capture all of California’s floods, we’d have no trouble balancing the groundwater accounts, but the researchers I talked to said that the state is nowhere close to being able to do that. One big problem: California often gets floods in the Sacramento River basin, in the northern half of the state, where groundwater levels are fairly healthy. There’s no way to magically teleport floodwaters from north to south before they hit cities.

A new study commissioned by the California Water Foundation took a close look at three counties in the San Joaquin River Basin, where groundwater is overtapped. This study found an average overdraft of 250,000 acre feet per year, and average winter flood flows in the region’s rivers of 253,400 acre feet per year. So the water is there!

Of course, there are problems. That water comes in large pulses that would swamp the existing canals and ditches if water managers tried to channel it all onto fields. The study estimates that the region could only move 130,000 acre feet of water out of rivers with the existing canals. And then we have to ask, where do we put all that water?

How much land is suitable for flooding?

What sort of farmland can we inundate? The flood-the-farms idea will only work if the soils allow for deep percolation. The land has to be flat; you obviously can’t flood rolling hills. We should rule out any land with contaminated soils — we don’t want salts, pesticides, and fertilizers flushing into the aquifers. And farmers won’t volunteer to flood any field if it’s bad for business — if the waters are likely to damage soil structures or hurt the orchards. After accounting for each of those limits, how much farmland is left?

Approximately 3.6 million acres, according to a research team led by Toby O’Geen, a soil scientist at the University of California Agriculture and Natural Resources Cooperative Extension. That’s plenty. In a recent paper, O’Geen et al. wrote, “A preliminary calculation based only on soil properties and crop type shows that landscapes rated Excellent or Good could be used to bank as much as 1.2 million acre feet of water per day.” At that rate you could eliminate the state’s entire overdraft with just two days of floodwater.

But again, it’s not so simple. The researchers note that this land isn’t necessarily connected to the water (again, the lack of canals). And each field may have complications: a hesitant farmer, variations in the soil profile, heaps of red tape. Many farmers have replaced flood irrigation systems with micro sprinklers, or drip systems, and in some cases have taken out the old ditches or completely regraded the fields, said Thomas Harter, a UC-Davis researcher who collaborated with O’Geen on the mapping project. Those researchers have made interactive maps available online in hopes that farmers and water officials will combine that data with local knowledge to find the realistic spots. 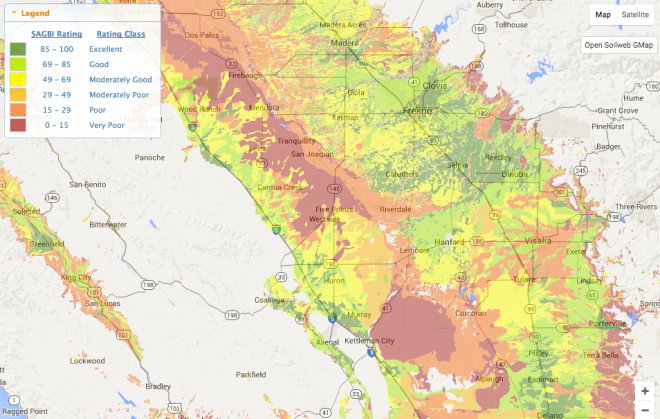 Zooming in on the suitable farmland with the interactive maps.California Soil Resource Lab

If we want a sense of how much flood water could realistically get to those green spots on the maps, we can return to that California Water Foundation study. In that area, if you recall, there is an average overdraft (the amount of water farmers are pumping out of the ground in excess of what goes back in) of 250,000 acre feet per year. Realistically, farmers could be adding 52,000 acre feet of water per year to aquifers by diverting flood water onto fields, according to that study. That would cut the overdraft by 20 percent.

If the combined estimates of floodwater and land to absorb it hold true for the rest of the state, we may have solved 20 percent of the problem. But we are still missing 80 percent of that 1.2 to 2.6 million acre feet of overdraft. “It’s obviously not solving the problem, but it’s a first big bite,” said Daniel Mountjoy, director of resource stewardship for Sustainable Conservation, a California nonprofit that has been an active player in the groundwater recharge investigation. Where does the rest of the water come from? 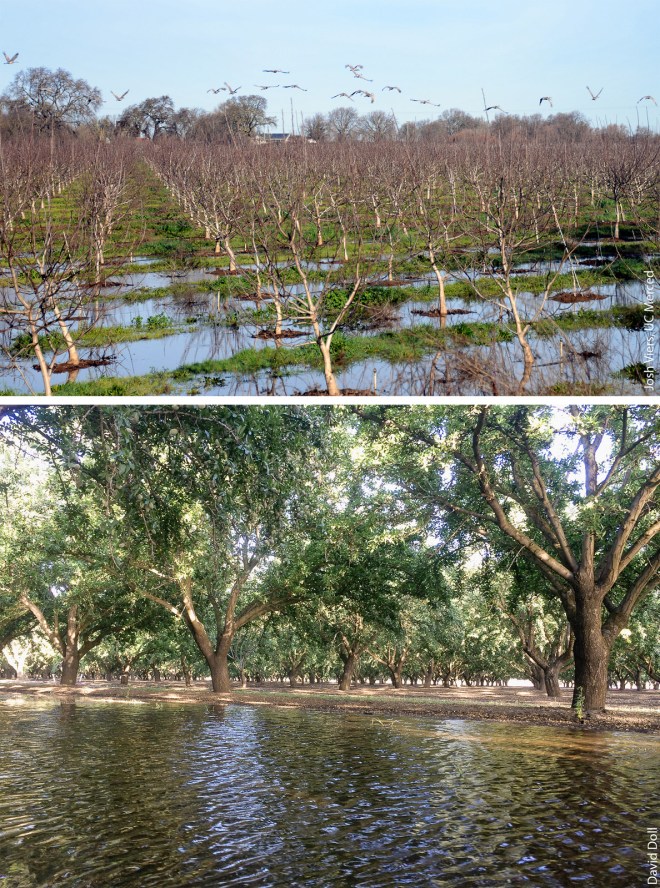 Orchards of walnuts (above) and almonds (below).O’Green et al

In the end, it will come from farmers taking land out of production, or switching to more drought-tolerant crops. But Mountjoy also thinks it could be possible to nudge that 20 percent higher. So far we are just looking at the cheapest option. We could spend more — build more ditches, enlarge canals, build up berms for deeper inundations — and we’d get more water into the ground. In addition, the study only considered floods that came from November to March. Additional big storm events can also come in April, May, and June. It’s possible that farmers could take water later into the spring, even as the crops are growing.

Sustainable Conservation is now working with the California almond growers to study how farmers might flood their orchards without hurting the trees. Tree fruit growers and grape farmers are also investigating the opportunity. Groundwater recharge won’t keep every acre of farmland in business, but I bet it will keep a lot of farms chugging as they feel the squeeze of California’s new groundwater law — which requires farmers to take no more water out of the ground than goes in.

If farmers embrace groundwater recharge, it could keep them in business and reduce flooding. But my favorite aspect of ground water recharge is that it would help desiccated riparian environments — rivers that have become trickles, and creeks that have gone dry. The Water Foundation study found that 40 percent of the water from flooded fields would end up in groundwater below those fields, while 17 percent flowed to groundwater elsewhere. The final 43 percent of the water — the biggest portion — goes into the ground and then back out again in streams. Stricken creeks could spring back to life. Groundwater recharge gives farmers a strong incentive to do something that will help them, and help the local environment even more.

What’s the best way to dehumidify my apartment?