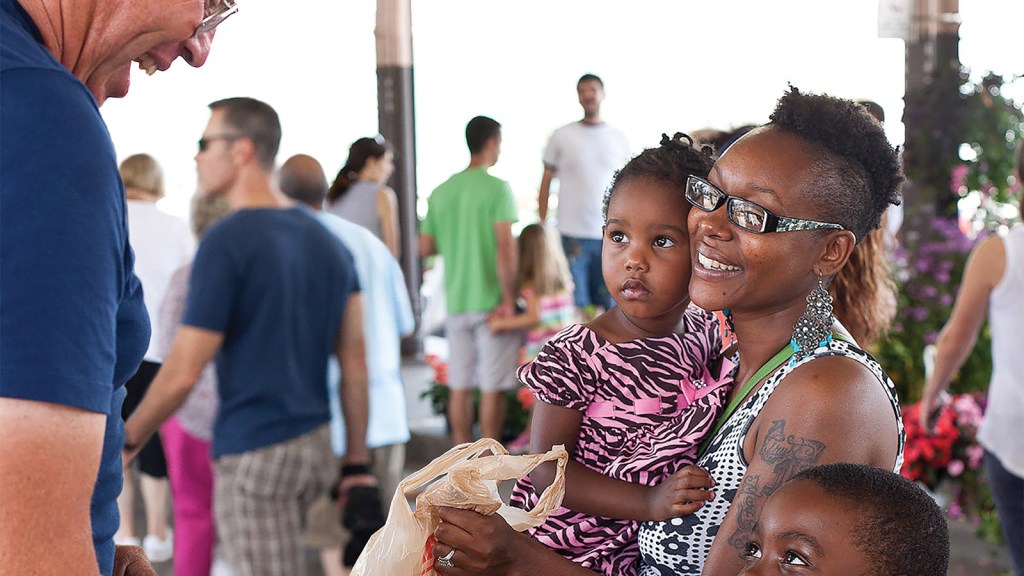 You may be numb to it by now, but if you haven’t noticed, we’re in the middle of yet another paroxysm of debate over diet. (This time around, the low-fat philosophy is taking a beating.) The argument is fascinating from a history-of-science perspective but totally irrelevant from a policy perspective — which is to say, an actually-solve-real-problems perspective.

The diet wars are irrelevant because:

Want a diet for America that actually works? Forget about arguments over reducing carbs or fats or gluten. Let’s cut back on poverty.

Cutting back on poverty is good for the environment. And, when people can spend the money to feed themselves well, they can also pay farmers to invest in good land stewardship.

That sounds nice, but in real life, do we have a practical means to cut back on poverty, improve nutrition, and support farmers?

Yeah, we do. It’s called Double Up Food Bucks. It’s been running for five years in Michigan, and there’s money available through the Farm Bill to start similar programs elsewhere.

Anyone interested in learning how this program works, and how to kickstart something comparable, should join us on Sept. 11, when we’ll be hosting a Google hangout with people involved in various aspects of the program. You can sign up here.

The Double Up idea is simple: If you are getting food stamps (properly called Supplemental Nutrition Assistance Program, or SNAP, benefits), and you use them to buy locally grown fruits and vegetables, Double Up will match whatever you spend. So for example, if you spend $10 from SNAP, you can use it to buy $10 worth of ramen, or $20 worth of farmers’ market produce.

“It gives low-income families more money to purchase local fruits and vegetables, and it also gives farmers more money in their pockets, and that money then recirculates in their communities,” said Oran Hesterman, CEO of the Fair Food Network, which started Double Up.

One of the big reasons I like the Fair Food Network it that it is focused on results. It’s dedicated to making the food system more equitable and sustainable, and it’s agnostic about the means of doing that. If there are signs that there’s a better means to achieving these goals, I have no doubt that the people at the Fair Food Network would happily change course.

So when I pushed Hesterman to show me that his work was actually making a difference — and was a better use of money than the alternatives — he was careful to stick to the evidence:

“It’s an important question,” he said, explaining that there wasn’t proof that Double Up was ending poverty and obesity, though there is a study underway from the University of Michigan. “What we do have is a strong indication that when folks are using Double Up Bucks they are not only increasing the amount of local produce they purchase but their consumption and diets are changing as well.”

And there is circumstantial evidence. People are using the program year after year. If they were buying all that produce and then simply letting it rot, they probably wouldn’t keep coming back. “This has gone beyond pilot or seed stage,” Hesterman said. “Now it’s a demonstration that it works across the ninth largest state in the country, and it works as well in downtown Detroit as it does in rural Benzie County.”

I’ll be there, along with Hesterman; La’Tice Ford, who has used Double Up to stretch her food budget; Vicki Zilke, a nurse-turned farmer; and (possibly) a doctor who works on obesity and cultural health disparities — and you too, I hope. It’s 12:30 p.m. Eastern time — 9:30 am Pacific — Thursday, Sept. 11. Sign up here.