At COP25, indigenous groups are making sure their voices are heard 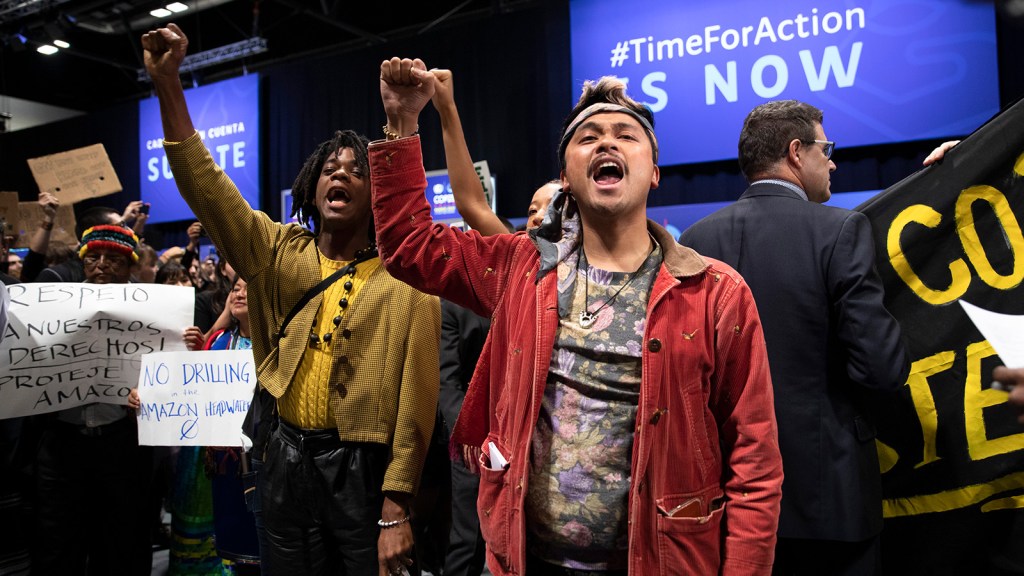 At COP25, indigenous groups are making sure their voices are heard

Global leaders and delegates from all manner of public and private organizations have spent the last two weeks gathered in the halls and chambers of the Feria de Madrid conference center for the United Nations Climate Change Conference, also known as COP25, discussing solutions for our overheating planet.

Amid negotiations, protests, and national leaders playing the blame game, some of the loudest voices have come from indigenous people demanding that any international climate policy include their expertise and interests.

Last Friday, a large indigenous contingent led approximately 500,000 protesters on a march through Madrid’s city center in a monumental climate demonstration. Then on Monday, indigenous groups protested in front of the Canadian embassy, demanding that the government reject the Teck Frontier oilsands mine in Alberta. Meanwhile, indigenous activists from Brazil and Colombia, along with Extinction Rebellion protestors, blocked the road leading to the entrance of the conference center with a yellow sailboat inscribed the words “Climate justice now!” written in the six official U.N. languages to demand an end to the murders of indigenous environmental defenders in the Amazon.

On Wednesday, the protests moved inside the COP25 venue in an action organized by several civil society organizations. Indigenous delegates from around the world sang, chanted, and told stories to pressure developed countries to meet their Paris Agreement targets. “Step up, pay up” was their slogan — in other words, the countries and corporations responsible for the crisis should bear financial responsibility for fixing it. But the protestors, who also included non-indigenous youth activists, were forced out of the venue by security, who threatened to take away their badges.

My friends from @GuardianesBos just sent this to me from #COP25.

The world needs to see this.

“The youth and indigenous were removed from @COP25CL. Please raise your voices in solidarity. We cannot be marginalized from the conversation.”@SustainUS @Fridays4future @sunrisemvmt pic.twitter.com/1QZImN6a79

For Orion Camero, the official response to Wednesday’s protest was disappointing. “It is ironic that the hashtag emblazoned all over the venue says #TimeforAction, and yet when we do we are kicked out of the talks while polluting corporations are allowed to use the climate talks as a greenwashing marketing scheme,” said Camero, the delegation leader for SustainUS, a nonprofit youth-led advocacy group, which sent its first ever all-indigenous delegation to the summit.

The SustainUS delegates, along with other indigenous activists, are asking wealthy countries to provide financial restitution to vulnerable nations on the frontlines of the climate crisis, and also to exclude the fossil fuel industry from climate policy and decision making. But most of all, they want policymakers to listen to and center the stories of indigenous groups, who have always been stewards of the land and waters that are vital for life on earth.

“The climate crisis is a spiritual crisis for our entire world,” Rose Whipple, a member of the Santee Dakota and Ho-Chunk nations and youth delegate with SustainUS, said during a youth panel on Monday. “Our movement must be bigger than recycling and braver than holding signs. It is up to everyone of us to build movements that center the rights of indigenous peoples. It is time for us all to reconnect with Mother Earth.”

From protecting Mauna Kea to saving Bristol Bay in Alaska to protesting the Keystone XL and Dakota Access pipelines, the indigenous environmental movement has grown in prominence in the U.S. in recent years. And it’s gained some high-profile allies internationally. At the same youth panel that Whipple spoke at, Greta Thunberg, who had just been named “Person of the Year” by Time magazine, made a point of ceding the floor to Whipple and other indigenous panel members. Luisa Neubauer, a German climate activist, joined Thunberg in the act of solidarity.

“It is so incredibly important that we listen to indigenous peoples because they are suffering and their rights are being violated across the world, and they are also the ones that are being hit the most by the climate emergency,” Thunberg told the press during the panel.

She added, “They have been living in balance with nature for hundreds of years, so we need to listen to them, because they have valuable knowledge we need in this crucial time of crisis.”