The toxic legacy of DDT could span three generations 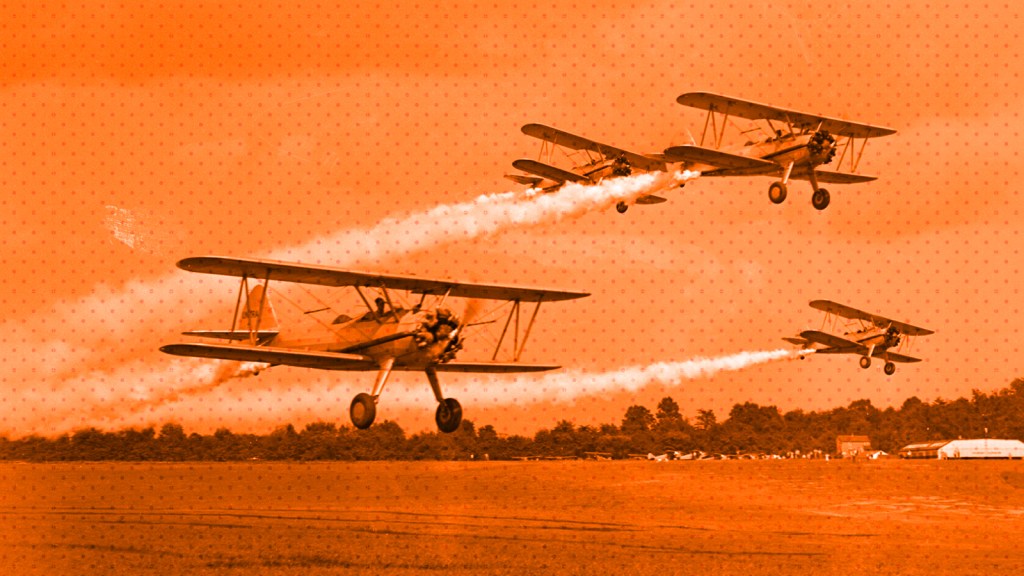 More than 50 years ago, scientists at the Permanente Foundation Hospital in Oakland started a simple experiment: When a pregnant woman would come in for routine maternal care, they were asked to give a sample of blood, to be frozen for future research. They didn’t know it at the time, but those samples would later be key in understanding the long-term health impacts of the then widely-used pesticide DDT.

Dichlorodiphenyltrichloroethane. Not a name that rolls easily off the tongue. But in the mid-20th century, the chemical was considered a “miracle” insecticide that was safe for human exposure.

In World War II, U.S. forces used DDT to prevent diseases like malaria or typhus. In a 1946 promotional film from the Army Air Forces, a grainy black-and-white B-25 bomber can be seen spraying a trail of the chemical in a fine, white mist.

“Instead of bombs, the B-25 now sprays DDT over large areas,” boasts the narrator. “Epidemics can now be prevented or stopped suddenly.”

After the war, the U.S. still had large stockpiles of DDT, sprayer planes, and a workforce of trained pilots. Chemical companies saw agriculture as a promising new market in which they could deploy those resources. By 1959, farmers across the country were applying roughly 80 million pounds of DDT to crops each year, according to the Environmental Protection Agency.

“People thought of this chemical as a miracle, because it was very good at controlling the mosquito that transmits malaria,” said Barbara Cohn, director of the Public Health Institute’s Child Health and Development Studies program.

“In nature, nothing exists alone,” Carson wrote. “If we are going to live so intimately with these chemicals eating and drinking them, taking them into the very marrow of our bones — we had better know something about their nature and their power.”

Carson’s warnings about DDT and other pesticides sparked a backlash against the chemical and planted the seeds of the modern environmental movement. By 1972, concern about DDT had risen to such a fever pitch that the EPA banned it altogether.

But what of the millions of people who had been exposed to the pesticide? In the ruling, the agency called it a potential human carcinogen, yet noted that we may never have the data needed to know for sure. That prediction has mostly stayed true: Although many communities have anecdotally shared stories of unexplained breast cancer clusters near the fields where DDT was sprayed, a causal link seemed impossible to prove. Many studies that took place in the decades after the chemical was banned have had trouble definitively linking DDT exposure to cancer.

But in the early 2000s, Cohn found a new source of potential answers — in the bank of frozen blood taken from pregnant women at Permanente Foundation Hospital during the ‘50s and ‘60s. The library, which had grown to include blood samples from around 15,000 women, was a priceless cache of biological data from which DDT’s effects could be analyzed.

“These data, which are 60 years old, are the only data like this in the world,” Cohn said.

Cohn’s team got to work: They tested each woman’s blood sample for DDT, then searched California’s cancer registry to see if she eventually developed breast cancer. They found that women who were exposed to DDT at specific periods in their life were more likely to develop breast cancer later in life. In other words, a woman’s cancer risk wasn’t just determined by how much DDT she was around, but when she was around it.

Timing matters when it comes to chemicals – like DDT – that disrupt the hormone system, said Sheela Sathyanarayana, associate professor of pediatrics at the University of Washington. These chemicals are riskier during periods of hormonal activity, like prenatal development or puberty.

“You have to look at the right time period for endocrine-disrupting chemicals,” Sathyanarayana said. “I do think you could miss [their health impacts] if you weren’t looking at the correct time period.”

In the years since she started analyzing the women’s frozen blood, Cohn has extended the scope of her original research to look at the health outcomes of the subjects’ children. The mothers in the study had a five-fold risk of developing breast cancer before menopause if they were exposed to DDT before puberty. Their daughters, who were exposed to DDT in the womb, had around a three-fold risk of developing breast cancer, according to the findings of her 2015 study, which was published in The Journal of Clinical Endocrinology & Metabolism.

“I think [Cohn’s] work is really strong,” Sathyanarayana said. “It’s probably the strongest evidence linking a chemical to breast cancer that I know of.”

Now, Cohn is starting to look at the third generation: the granddaughters. As female babies are born with ovaries already full of millions of egg cells, a pregnant woman’s exposure could have impacts not only on a female fetus but on the grandchildren that result from that individual’s eggs decades down the line. Many of the women in Cohn’s third study generation are now in their 20s, so it may take several more years to determine if their cancer risk is also linked to DDT. If those women do develop cancer, Cohn wants to make sure her program is there to study the answers.

“We do what we can with the data that we’re given, and we have to protect our opportunity to know more,” Cohn said. “Now it turns out that may be more important than we thought.”