The fundamental facts of environmental justice — that communities of color face disproportionately higher rates of pollution — have been known for decades. It’s been more than 20 years, for instance, since President Bill Clinton signed an executive order directing federal agencies to provide environmental protection for poor and minority communities. Yet in all that time, the government has routinely fallen short of its civil rights obligations, sometimes with deadly results.

Now the U.S. Environmental Protection Agency is unveiling an effort to try again, expanding its environmental justice efforts with a four-year plan to tackle lead poisoning, air pollution, and other problems. The effect would be to take environmental justice considerations into account at every step in the EPA’s rulemaking and enforcement process, from going after violators to issuing permits for polluting industries.

“That may sound like a small task, but it frankly is not,” EPA Administrator Gina McCarthy said in an exclusive interview with Grist previewing the agency’s EJ 2020 Action Agenda, released today. “It required us to provide guidance, documents that we have completed, on how a permit should reflect our interest in environmental justice. We did the same thing for our rulemaking.”

This isn’t the EPA’s first effort to advance environmental justice (there was a Plan EJ 2014, too), but it appears to be the most ambitious and far-reaching. The agency worked to develop better tools and had important conversations with key constituencies as part of the process.

“This is a great next step,” said Lisa Garcia, vice president of litigation for healthy communities at the nonprofit Earthjustice and a former agency official who worked on the 2014 plan.

But other advocates fear the agency’s new approach continues to fall short. “These are goals, but goals have no teeth,” said Elizabeth Yeampierre, who leads UPROSE, a Brooklyn-based community group that promotes sustainability and resiliency. Yeampierre says the plan doesn’t place enough emphasis on the impacts of climate change for communities at greatest risk, which she called a dated approach.

Garcia, too, cautioned that even when it has a solid plan, the agency does not always live up to its promises. Her group has previously sued the EPA in order to make it do its job, and she says advocates “will hold the agency’s feet to the fire” this time, too. 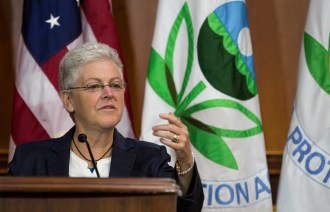 McCarthy acknowledged that skeptics of the government’s commitment have history behind their doubts. Last month, for instance, the U.S. Commission on Civil Rights issued a scathing 230-page report documenting how the agency has forced communities to endure extreme delays or outright inaction when seeking respite from polluters.

“The agency has a lot to prove,” McCarthy told Grist. “And we are going to do that.”

Just how will that happen? Under the plan released today, the EPA wants to target a range of environmental justice problems and develop regulatory actions to address them. For example, the agency has committed to “work to eliminate disparities in childhood blood lead levels.”

What’s that mean? Environmental rules often set allowable amounts of a pollutant like lead in the air or water over a wide area. But some communities within that wider area can still be faced with multiple risk factors — like living close to a coal-fired power plant or polluted industrial site — and suffer harmful exposures while others do not. Those communities are almost always inhabited by people of color.

So the agency will be looking at actual levels of lead in children’s blood and developing stricter rules, such as potentially tightening the lead copper rule on drinking water, and then measuring its success at a five-year benchmark to help determine whether the new regulations are successful.

The other major new initiative sets goals for promoting environmental justice with partner organizations. The EPA does much of its work in tandem with other federal agencies, as well as with state, local, and tribal governments. Under the new initiative, for instance, the EPA would flag projects supported by the Department of Transportation or the Department of Housing and Urban Development that could worsen pollution in disadvantaged communities.

That means that instead of helping to build highways through the middle of low-income or predominantly non-white neighborhoods, the federal government would be more likely to support projects like affordable housing with access to transit and parks.

Besides advocacy groups, the EPA consulted with local governments, many of them working on similar initiatives, to develop the plan. “We made sure from that it would build on, and not interfere with, the efforts of states to implement environmental justice,” said John Stine, commissioner of the Minnesota Pollution Control Agency and president of the Environmental Council of States, the professional association of state environmental agency leaders.

To incorporate justice concerns more fully into decision-making, McCarthy said, the EPA first needed to develop tools to supply regulators with the right information. So the agency has created EJSCREEN, a mapping program to provide environmental and demographic information on any chosen area. The tool helps determine which communities might be especially at risk from concerns like higher exposure to toxins from industrial pollution.

Still, there are environmental justice challenges that the plan does not directly confront. It’s no guarantee, for instance, that the country won’t face another lead poisoning catastrophe like the one in Flint, Michigan, for which the EPA bears partial blame. Stricter rules and earlier federal intervention could help avoid emergencies, but EJ 2020 isn’t designed to handle big environmental crises once they’ve already taken hold.

EPA’s own inspector general found that, despite having information about elevated lead levels in Flint’s water, the agency waited seven months to intervene. McCarthy disputes the length of time it took to issue an emergency order, but she conceded to Grist that the EPA needs to move more quickly to use its emergency authority in similar cases. The new plan, though, doesn’t provide specific timetables for doing so.

It also doesn’t address EPA’s tremendous backlog of civil rights complaints. Besides the pile-up of cases alleging environmental discrimination, the agency has never once found a violation of the 1964 Civil Rights Act’s Title VI, which prohibits discrimination in federally funded programs. The agency has a separate strategic plan draft to tackle those complaints, and McCarthy hopes to work with states to avoid them in the future.

The EJ 2020 plan can’t do everything to solve the government’s long history of neglecting its obligation to protect communities of color. But, McCarthy said, “that should not diminish the terrific work we have done on environmental justice, and that we’re going to continue to do moving forward.”